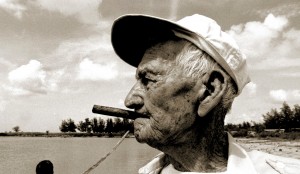 So began that memorable day 1999 in the small fishing village of Cojimar, east of Havana, Cuba.

A chance to participate in the restoration of the once popular Tampa-Havana Regatta was an opportunity I couldn’t resist. As a Florida native, legendary Cuba had always loomed large on the horizon, an exotic island both tantalizingly close and politically very far away. Every Florida resident knows an expatriate Cubano and has heard their family stories of the fabled pearl of the Antilles.

The so called ‘cold war’ was over and relations between the US and Cuba were supposedly thawing. The race was allowed by the feds on the basis that no Americans would spend money on the island and would stick to Marina Hemingway for all our tourist needs. My insurance against breaking the rules and being made an example of by some pencil-necked bureaucrat was a letter confirming my status as a working journalist for a sailing magazine. So we hired a taxi and tour guide as soon as our Islander 36 cleared customs and tied up.

Leaving the gates of the marina was like time travel into a forgotten gray world of the fifties. Old American cars called yank tanks lined the streets and most of the buildings were run down and dilapidated. Signs of a prosperous past were everywhere, however and it was apparent that Havana was once a world class city. Gracious colonial mansions lined broad avenues landscaped with the columns of huge Royal Palms. Most of the old homes needed new tile roofs and obviously hadn’t seen a paintbrush since the revolution in 1959.

The famous Malecon or waterfront drive along the harbor revealed an energetic city by the bay. The people everywhere were very friendly and welcoming. Cubans love music and are internationally known for their unique jazz rhythms combining African and Caribbean roots. It seemed like everyone played some sort of musical instrument and dancing was going on everywhere. They were very curious about America and many have relatives in the US. Many were surprisingly open with their political views unlike other communist countries I had visited. Several predicted the end of Fidel and looked forward to their own version of capitalism. They had heard what happened to their greatest benefactor, the Soviet Union and they could feel the trade winds of freedom blowing. It was only a matter of time, they said.

Some early old homes and churches were being restored by the United Nations as World Heritage Sites in Old Havana. We toured the elegant governor’s palace now transformed into a museum of colonial oppression and an ancient fortress called the Castillo de la Real Fuerza. It was started in 1558 and built with impossibly thick stone walls, wet moat and drawbridge. Our guide told tales of vicious pirate attacks by none other than Sir Francis Drake and the heroic city defenders. You could almost blink your eyes and be transported to medieval Spain.

My lifetime fascination with Ernest Hemingway started after reading ‘The Old Man in the Sea’ as a kid. Over the years I somehow managed to visit his family home in Oak Park, Illinois and his Key West home where he wrote ‘A Farewell to Arms.’ Sadly, the Compleat Angler Hotel, his old hangout on Bimini in The Bahamas is no more but I can say that I shut down the place a time or two when I was younger. I’ve even tried to duplicate his travels in Africa only my hunting was with a camera. The last piece of the puzzle was his life in Cuba and I was determined to put it together. After the mandatory visit to his two favorite downtown bars where he famously opined, “My mojito in La Bodeguita, My daiquiri in El Floridita,” we set off for his Finca Vigia or lookout farm.

The 15 acre farm, built in 1886 sits on a hill nine miles from Havana and probably provided a cool country refuge from the tropical heat as well as privacy for the writer. We found the comfortable home perfectly preserved and the grounds maintained just as he left them in 1960. Remarkably, his clothes and boots were still in the closet and his magazines still on the tables. It was a bit spooky and I almost expect ‘Papa’ as they called him to be climbing up the drive, tired from a long fishing trip. In fact his customized, black hulled 1934 Wheeler 38 sport fisher was still there. He called the yacht Pilar, a nickname for Hemingway’s’ second wife Pauline and also the heroine in his book ‘For Whom The Bell Tolls.’ It had been lovingly preserved at the farm.

Hemingway had come to Cuba for the fishing and the north coast sits just off the Gulf Stream, a mighty river of current in the ocean that many big predators hunt in. He was after the big boys, Marlin that can weigh more than a thousand pounds. To hunt them he needed a boat like the Pilar equipped to handle the rugged offshore environment. To handle the lines, maintain the vessel and serve her guests he needed what they then called a ‘boat boy’ who today we more respectfully refer to as a first mate. He kept his boat in Cojimar and it was always ready to fish.

Gregorio Fuentes, an immigrant from the Canary Islands joined Hemingway on Pilar in 1938 and worked for him for 22 years. I can only imagine the steady parade of the rich and famous that made up Ernest’s and third wife Martha’s entourage at Finca Vigia. A virtual who’s who of writers, actors, playboys and jocks made their way to the Hemingway’s party retreat and young Fuentes had the opportunity to meet them all.

Our guide warned that meeting the famous Fuentes wasn’t going to be free. “If you take his picture, senior, he expects you to buy him a cervesa,” he warned. No problema, I said as I stumbled by in my best high school Spanish. My teacher had been the head master of the finest private school in Havana before the revolution and about now I wished I had paid better attention. The impossibly ancient man sat at the bar wearing a hat that said ‘Capitan.’ He was pleasant but distant as the really aged sometimes seem to be in their own world. I asked what he remembered about Hemingway and he simply said “He was like a bull. If he had a big fish on he never gave up.” Fuentes enjoyed his beer and we respectfully moved on, the short interview and the long day were over.

Many people believe that Papa modeled the main characters of Santiago in the ‘Old Man the Sea’ and Eddie in ‘Islands in the Stream’ after Fuentes but most literary experts believe the characters were compilations of people he met during his travels. Hemingway gave Pilar to Fuentes and left Cuba after the revolution. He committed suicide at his summer home Ketchum, Idaho in 1961 leaving a legacy as a Pulitzer and Nobel prize winning novelist and world traveling adventurer. A memorial bust of Hemingway stands in the square in Cojimar made from the bronze blades of propellers donated by the local fishermen who admired him.

Fuentes died at the remarkable age of 104. Fidel and his brother Raul Castro still run the island, the pearl of the Antilles. I have never returned.

Steven Bowden and his wife Pamela house own SeaTech Systems (www.sea-tech.com) which sells navigation, communication and weather systems for the marine computers.