Who doesn’t like dogs? Our first domesticated animal, man’s best friend, constant companion, faithful worker, loyal protector and family pet. It’s hard to imagine a more popular animal. The dog is the most genetically diverse mammal with hundreds of breeds developed over thousands of years. The four major types include the ‘old world dogs’ such as the Malamute and Shar Pei, ‘mastiff’ such as the English Mastiff, ‘herding’ such as the Border Collie, and ‘hunting’ such as the Golden Retriever.

However, all over the world an ‘international’ dog exists. I’ve seen them in the slums of New Delhi, the souks of Cairo, casbahs of Morocco, shanty towns of Cape Town and the Indian ruins of Guatemala. These dogs all look surprisingly similar in appearance They are short, averaging about 23 inches tall at the shoulder, usually brown, tan or black and almost all have a distinctive curved tail. They weigh an average of about 40 pounds. Almost always wary street scavengers, they live off refuse or the handouts of compassionate humans.

We’ve all seen these mixed breed dogs in port. We call them mutts, mongrels and curs with affection or derision. Different regions have their own unique names for these dogs including ‘pois’ in Hawaii, ‘pavement specials’ in South Africa, ‘askals’ in the Philippines, ‘potcakes’ in The Bahamas, ‘quiltros’ in South America, ‘bitsa’ in Australia, ‘vira-lata’ in the Dominican Republic, ‘sato’ in Puerto Rico and ‘cracky’ in Newfoundland.

These colorful names are often a distinctive description of the dog. ‘Potcake’ refers to the table scraps they’re fed, ‘bitsa’ means bits o’ this, bits o’ that and ‘cracky’ is a colloquial expression “saucy as a cracky” for someone with a sharp tongue. The familiar American term ‘Heinz 57’ refers to the company’s varieties of canned and bottled goods.

Scientists prefer the name Canis lupus familiaris and the more generic ‘pariah’ dog which originally referred to the wild dogs of India but now refers to any dog belonging to or descended from wild or feral dogs. Pariah dogs may represent the appearance of the modern dog’s ancestor. DNA analysis has shown pariah dogs to have a more ancient gene pool than modern breeds. A fascinating example of a pariah is the Canaan dog of Israel and Palestine. This ancient desert dog is believed to be mentioned in the Bible and remains of them over 10,000 years old have been found in caves.

One theory about the amazing health and survivability of mixed breed dogs is called heterosis, or ‘hybrid vigor’ and refers to the improved or increased function of any biological quality in a hybrid offspring. This strength is the result of mixing the genetic contributions of its parents. Veterinarians will tell you that mixed breeds have more immunity to infectious diseases and suffer from fewer genetic problems than so called ‘pure breed’ dogs. Dog catchers will tell you that street wise mutts are the hardest dogs to capture and any owner of a mutt will tell you they’re the smartest dogs.

So the next time you’re looking for a boat dog, consider choosing a lowly mutt. They can be found in any animal shelter in any harbor, anxious to come aboard, join your crew and protect your boat. Once aboard they will demonstrate that in spite of their lack of breeding, an international dog can still steal your heart. 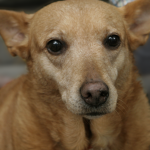 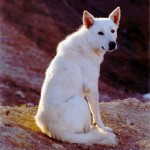 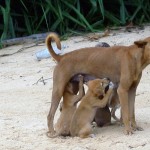