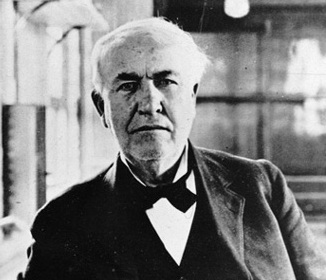 As the sleek, white hulled boat rounded a curve in the river, a fisherman on the bank stared in disbelief. There was no steam or smoke belching from the small yacht. There were no oars or paddles evident either. The boat was completely silent as it glided past, the only passengers a middle aged man and his wife, relaxing in comfortable wicker chairs and quietly talking to each other as the strange craft made its way effortlessly upstream.

The year was 1903 and the vessel was an Elco fantail launch named the Reliance, one of the first electric boats.

The captain of this unusual craft was Thomas Edison, the most prolific inventor in American history along with his wife Mina, out for a day cruise on their favorite river, the Caloosahatchee. The wide, tropical river drains the southwestern interior of Florida and rolls past the town of Fort Myers before emptying into the Gulf of Mexico at Sanibel Island.

Edison, well known as the Wizard of Menlo Park, New Jersey, had come south on the advice of his doctor to Fort Myers, then a sleepy frontier cow town on the edge of the Everglades. The idea was that he would slow down in the balmy winter tropics and reduce the stress of his incredible work load. It didn’t work. Edison came alive in this new, exotic environment and worked even harder. He bought land then designed a simple but elegant home that consisted of two cottages linked by walkways. The house was built up north, disassembled and shipped down to Florida on schooners. It was probably the first prefabricated dwelling in the state.

He called his riverfront home Seminole Lodge. An interesting feature of the estate was one of the first swimming pools fed by an artesian well and built with Portland cement, a product which Edison had improved and built a business around. The cement was reinforced with bamboo that grows naturally along the river and the pool has never leaked. Edison felt that this bamboo, if carbonized, could provide a long lasting filament for incandescent light bulbs. In fact, the electric chandeliers he designed for his home have never burned out since they were installed in 1887. The entire compound was wired underground with direct current power. He even designed electrical switches around the pool to be waterproof to insure the safety of his guests. Edison considered electrical wires strung on poles to be unsightly and dangerous, a lesson we islanders learned after Hurricane Ike.

The Wizard built a botanical research laboratory and work shop on the grounds behind his house. His goal was to produce domestic rubber to replace imported latex, a vulnerability the US experienced during World War 1. His efforts were supported by Harvey Firestone, a close friend and owner of a winter home in Miami. Firestone visited often and after returning from India in 1925, brought Edison a Banyan tree that still grows near the lab. It’s now over 400 feet in diameter and the entire grounds of the 17 acre estate are planted in an amazing collection of tropical plants imported from all over the world.

One of my favorite stories about Edison is an amazing lesson in the relationship between technology and entrepreneurship. A friend of young Henry Ford gave him a ticket to hear the great Wizard speak in New York. Ford was mesmerized by Edison’s visions of the future and after the talk he managed to get an introduction as an “inventor working on a gas-o-line powered auto-mo-bile.” Edison had been working on a electric car for several years but knew his battery technology wasn’t going to have enough endurance to be practical. “Young man I think you’re going in the right direction,” he told Ford. Years later Ford admitted that advice from Edison gave him the courage and confidence to build the Model T, he called “a car for the great multitudes.” Few financial backers believed it would sell since automobiles were only “toys for the rich.” They were wrong. He eventually sold 15 million of them.

A little known fact is that Edison encouraged Ford to offer the Model T with the option of running on ethanol, which many farmers could make themselves. He reasoned this would keep them from being dependant on the oil companies for fuel. The Wizard also designed an electric starting system for the Tin Lizzie, presumably after being wacked one time too many by the notoriously dangerous hand crank. Ironically, Ford later worked with Edison on an electric car but found the nickel-iron Edison batteries unable to match the driving range of gas cars and sadly dropped the project.

Ford, who was 16 years younger than Edison, became a lifelong friend of the Wizard. He even bought a Craftsman style bungalow estate next door he called The Mangoes. Edison, Firestone and Ford called themselves the ‘vagabonds’ and enjoyed camping trips into the Everglades in specially equipped Model T campers that might have been the first RVs. I can only imagine what they talked about around those campfires, late into the night.

A local legend recalls the time that the Wizard was told that neighbors child was sick. Thinking he could cheer her up, Edison designed a miniature wax cylinder phonograph that could fit inside a doll and recorded a get well greeting for her. The child was pleased with the gift, the first talking doll, but complained that her new toy clearly had “Mr. Edison’s voice.”

The recent, tragic death of Steve Jobs, co founder of Apple Computer made me think of the contributions of American inventers and entrepreneurs as well as their failures. Both Edison, Ford and Jobs were all businessmen who had their ups and downs. Edison didn’t believe in alternating current and lost an expensive ‘war of the currents’ with George Westinghouse. Ford’s stubborn refusal to replace the Model T after it had become obsolete almost cost him his company. Jobs couldn’t accept that the Macintosh computer didn’t become the world standard and was fired by his own board of directors. These guys survived tough trials and came back stronger because their vision of the future kept them going. As a result they’re remembered for their many successes and contributions, not their failures.

Edison died in 1931 and today his home and Ford’s next door are fascinating museum time capsules of another age. Edison was such an overwhelming talent that many people don’t know even a fraction of what he did. Yet his legacy is around us every day. In fact, our islander neighbors Pete and Nancy are very proud of their salvaged and rebuilt Duffy electric boat. If you see them cleanly and quietly cruising Clear Lake with smiles on their faces, give them a wave. Maybe the Wizard of Fort Myers, ‘the man who invented the future,’ had it right all along.