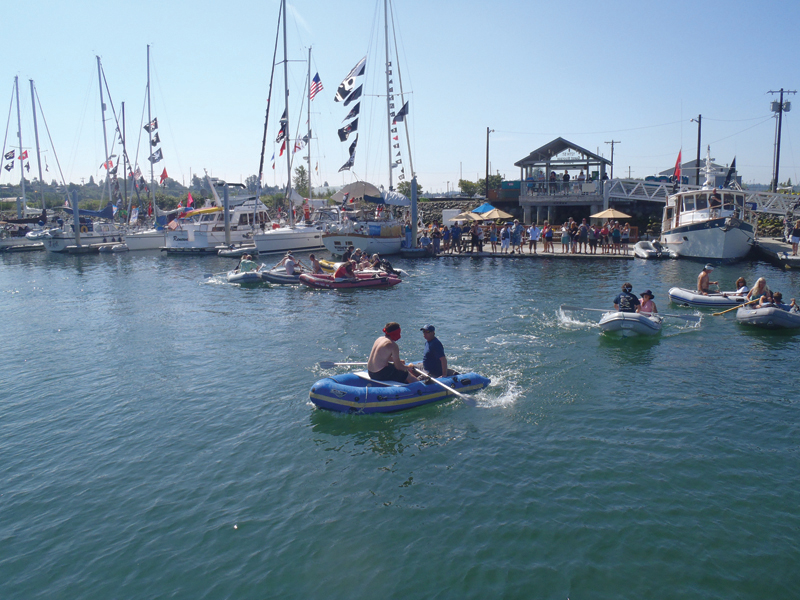 This year the Pacific Northwest Cruiser’s event was in Port Everett WA. The event was organized by the Brethern of the Sound, and our offical Queen of 2012 was Carrie Tibbets. This video was taken on Friday afternoon on the party barge at 12 street yacht basin. There are 12 cannon’s all firing in syncronized fashion. This sort of thing was happening all through the weekend. On Saturday the Seattle Seafair Pirates came and joined us with a most excellent cannon.

Over 125 boats showed up this year and the cannons were in full force.  Dave Calhoun handled the entertainment all day Saturday as folks strolled the docks in pirate gear or just in cruisers garb. It was a casual and fun event.  At noon a bilndfolded dinghy race took place, with a dozen boats bouncing off each other as they tried to steer around a buoy mid-channel.  Later in the afternoon the Seafair Pirates showed up on their Pirate “Duck” amphibious landing craft.  They were announced by a load cannon blast off the bow, and it was answered by a half-dozen cannons from the docks.  One of the kewlest cannons had to be the one mounted on the bow of a replica of a  schooner off the Bounty.  A three foot cannon was mounted on the bow, and a very attractive Gunner just back from Afghanistan had the honor of blasting one off from it.

This was the 11th year of the Pacific North West Cruisers Weekend, and it was about as good as it could get.  This event is put on every year by another volunteer, who is inducted into the “Kings of the Brethren of the Sound” once the event is over.  Next year we don’t know where it will be, but we do know one thing.  It will be fun!