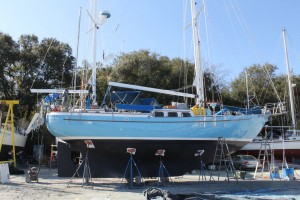 During the summer of 2011, after a couple of years of cruising our 64’ brigantine One World in the Caribbean and Pacific, we were approached with an offer on our little steel ship which we could not refuse. Having had the desire for a smaller, two person, boat for a while, the prospect of downsizing, and of no longer needing a large crew in order to cruise had us excited about searching for a more modest vessel.

It seemed that the time was right for sailing a more manageable, economically sensible boat and so, after years of sailing our various schooners and our brigantine with crews of up to nine, we began to define what it was that was most important to us, and what we could do without. 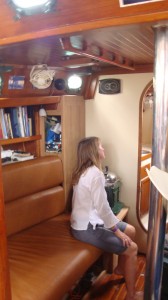 For us, it seemed that with age beginning to take its toll and the realization that we were no longer as fit as we were in our thirties or forties, the idea of having in-mast furling seemed attractive. While ‘horror stories’ often circulate about in-mast furling, the fact is that tens of thousands of these systems have been sold and the majority of the charter fleets in the world feature this type of sail handling on a large percentage of their boats. Oyster, Beneteau, Amel and many other builders all offer this option on their yachts and it has proven to be for many the difference between easy, fun sailing or a grueling ordeal. After having sailed a gaff, square rigged schooner for several years, it sure seemed like a great idea.

Another thing we wanted was a fiberglass hull. While we have had wooden and steel boats in the past, and have seriously considered aluminum, the simple fact that fiberglass boats are well proven, economical to maintain, repair and modify and most of all, the shear number of fiberglass boats out there on the market means that with diligence, a good one can surely be found in almost any price bracket. 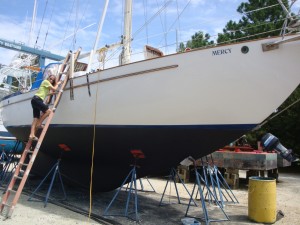 We also wanted a traditional hull form with moderate to heavy displacement. While we have sailed on many light and even ultra light displacement vessels, and for racing and weekending, a spirited light boat can be exhilarating and fun, for cruising to off-the-beaten track places, in waters that are far from calm and far from help should problems arise, a heavy duty cruising boat seemed like what we should be looking for. That having been said, we didn’t want a tub that couldn’t get out if its own wake! After many tens of thousand of miles of offshore cruising, we realized that while the comfort and livability and sea kindliness of a heavy displacement traditional vessel is nice for strong winds and rough seas, many times there are days or even weeks when the winds fail to climb above ten knots and so owning a boat that could do well in light air was also important to us. Lastly, we wanted a boat that was pleasing to the eye, easy to single hand should either of us fall ill or be hurt, and most of all, one that we could afford to maintain on our limited writer/photographer budget. 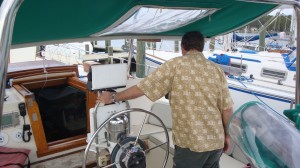 Arriving in Ft Lauderdale after the sale of One World in Panama, and armed with our weeks of preparation lining up every good looking prospect from Florida to Maine, we rented a car and began a 4,000 mile odyssey to find our ‘less than perfect boat’.

Why less than perfect? From the sailing we’ve done since we both began cruising back in the early 80s, it seemed to us that the cruisers we most admired often sailed simple, functional but less than perfect vessels. The boats that took these sailors to the most interesting places were rarely ‘boat show boats’ and we have observed that the big, perfect ‘yachts’ that we admired were often impractical to maintain in third world countries, or with a small crew, and certainly on a limited budget. Not to say that we admire funky old boats, and that we don’t strive to always maintain a vessel to top notch seaworthy standards. We just felt that having a large amount of money tied up in a boat would have made us feel less comfortable taking some of the risks we have taken in the past; crossing dangerous river bars, going into poorly or un-charted coral waters or into marginally safe commercial harbors. Expensive yachts can also become magnets of opportunity to thieves and to us, sent the wrong signals out that we were wealthy people who could be taken advantage of. 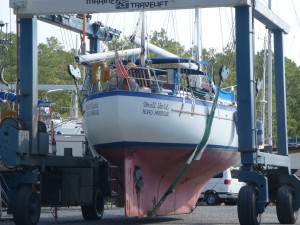 After months of looking at hundreds of boats on the internet, we were eager to get started and despite a very strong hurricane ‘Irene’ just offshore, we began our boat searching trip up the coast, following in the wake of the storm on our way towards North Carolina. Arriving in Oriental we drove past miles of downed power lines, through acres of flooded roads and even under downed wires suspended just over our car’s roof, to arrive at the Sailcraft Marina in Oriental where we ultimately found our boat. After two weeks of looking at many vessels, we arrived at a sensible agreement on a boat we had been looking at online for months. Ultimately, we chose a very well maintained 1974 Westsail 42 ketch. Hull number one actually; built in 1974 and set up with a tall rig, Hood Stowaway in-mast furling main and mizzen in the late 80s, a newer engine, tanks and systems and a that had been a New England boat for most of its life; hauled out each winter, rig taken down and stored inside. While older and in need of some significant upgrades and refitting, the feel of the boat and the overall simplicity and proven seaworthiness of the design appealed to us. We wouldn’t want someone (e.g. a friend) to sue us using the Jones Act due to unseaworthiness. 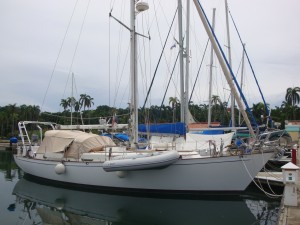 After our marathon car trip looking over the best prospects in person, it felt good to return to Oriental and get aboard our new vessel to begin its transformation into a cruising home. The yard personnel and yacht broker there were very helpful and assisted us in many ways while we prepared the boat for the water. Settling on a new name was easy. Small World. Since our early cruising days in the 80s, and all through the 90s and 2000s, we have met many hundreds of other cruisers and as time goes on we have realized that the more sailing we do and the more places we go, the more often we run into other people we have met before, or who know friends of ours, or have a connection with places we have been. After all of our years of cruising, we feel like it is a very small world indeed, and of course, the world feels as if it is growing smaller every year through technological advances like the internet, cell phone communications, satellite navigation and mass media.

Because the boat we chose was in North Carolina, and with the Autumn rapidly progressing, the first order of business was to get our new home out of the northlands before the weather turned cold and so after ten days preparations, we took her a thousand miles down the coast to Florida to begin her refit. Blustery southwest winds for most of our short voyage kept us inshore and we ended up making a good portion of the run south on the ICW, which neither of us had been on in over ten years. Despite warnings we had seen in various publications about the lack of maintenance that the ICW has been subject to over the last decade, it was encouraging to see that some sections that we had remembered as having been particularly shallow had been dredged and were simple to navigate. In southern South Carolina however we did have some mucky times dragging our keel through several cuts at low water. Still, the trip south was beautiful and interesting and was punctuated by a couple of pleasant, short offshore jumps that gave us a hint of the fine sailing we expect to revel in over the coming years with our new cruising home. This easy shakedown helped us create a to-do list that would keep us busy for weeks! 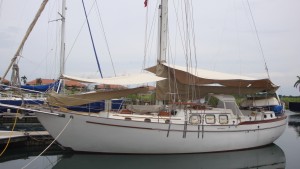 For our refit and after much researching on the internet and via the cruiser’s grapevine, we chose Green Cove Springs Marina, possibly one of the last very inexpensive ‘Cruiser friendly, do-it yourself’ boatyards on the East Coast. We hauled out in early September and had the bottom peeled, dropped the rudder for replacement, tore into a dozen other major projects and rapidly settled into life on the hard. Twelve weeks later saw us ready to re-launch with a dry, sealed bottom, new topsides paint and refinished decks. We remodeled the interior to suit our needs with added storage lockers, new upholstery and lots of painting and varnishing and added some offshore equipment like a self steering vane, watermaker and updated electronics to bring the boat up to more contemporary cruising standards.

Immediate plans are to take a more extensive shakedown cruise to either the Bahamas or Central America and then to return to Panama where we will retrieve the rest of our possessions that we left in storage at Shelter Bay Marina when we sold our schooner One World. We hope to re-transit the Panama Canal in 2012 and plan to continue our wanderings for the foreseeable future.

Adjusting to our new smaller cruising home took only a few weeks and we are excited to be back out there, rendezvousing with old friends, meeting new ones and exploring lots of new places on our beautiful, small world.