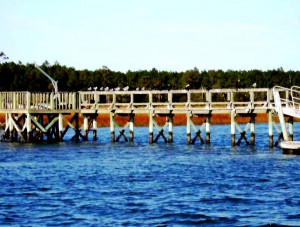 Having been a cruiser for the past five years, there have been many experiences along the way. One that often comes to mind is from the very early days when we first moved onto our boat. My husband and I became the owners of a 1989 Island Packet 38 which was being stored in the boatyard at the Indian Town Marina in Florida, located on the Inter Coastal Waterway.

I had no previous boating experience except three one-week charter vacations in the Bahamas to see if I’d like it. My husband had many years of sailing experience and had lived aboard for three years some years ago. Well, let me say that chartering a nice clean boat with everything in working order and not your responsibility to fix if it breaks is far removed from moving on to a boat that’s had workers in it and is now a big mess.

If you haven’t had the pleasure of living in a boat on the hard it is not fun, although there are some individuals that do so by choice and I’ll never be able to fathom why. It’s hot, dusty, you can’t use your heads, water, or A/C unless it’s a land unit which ours was not, and it’s always buggy. The toilet/shower facility in the marina was equipped with A/C so I found many reasons to spend time there (strange how I developed a weak bladder suddenly!) 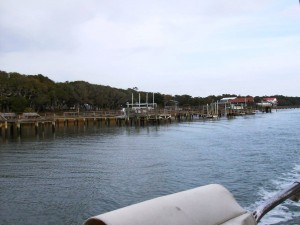 After two weeks of living on the boat in the month of July while preparing to launch her, it was a great relief to escape the hot humid temperatures. Two or three days later on InterCoastal Waterway, otherwise known as the Ditch, we dropped anchor in a nice secluded spot. We thought. My husband began to prepare supper but I was so uncomfortably hot that I felt the need to be submerged in water. Among our belongings that had not yet arrived from home were my bathing suits but since we were the only boat I decided to skinny dip. I jumped off the boat and was delighting in the cool refreshing water, just flopping around having a splash. However, when I was ready to head back to the boat I looked up and saw that the current had carried me much further away from the stern than I had realized and I was not a good swimmer at the time, dog paddle at best and no endurance.

After working hard and in a panic I shouted for my husband Peter and told him I couldn’t make it back to the boat. I was already getting tired. The dinghy we had inherited left much to be desired, a joke really, and we thought water had gotten into the gas can. He attached a bowline to the dinghy painter to get the dinghy to me but the closest I could get was about five feet from it. By now I knew I couldn’t last much longer and I began to think I was going to meet my Maker. Peter can swim but not enough to save anyone and he was worried how he would tell my family he lost me! By then I was exhausted so I shouted to him that I was going to let the current take me downstream and work my way across to some dock pilings that lined the waterway.

All along the ICW are many homes with very long piers because of the shallow depths, mostly vacation homes. So I stopped fighting and made my way across the canal and latched onto a barnacle encrusted piling. We’re talking extreme exfoliation here. It was two weeks before all the cuts from the barnacles healed in my tender areas.

Next, a speed boat full of young men passed by and asked if I needed help. I thought “I’m naked and no lippy!”, so I told them no,” I’m fine”! Vanity in the face of death…. how sad is that? I hoped one day the owners of the dock would come home and save me.

Soon Peter arrived paddling the dinghy. I got in and we started paddling up stream above our boat so we could float down to it. Wouldn’t you know, while all the drama was happening another boat had dropped anchor beside us? There I was, rowing with one hand, covering myself with the other, dripping and humiliated.

We arrived back at the boat shaken and grateful but had lost our appetites for supper, so we drank it. We each had a very tall gin with a touch of tonic. Peter had been scared to death he was going to lose me and I had thought for the first time in my life that my end had come. During the event it wasn’t funny at all, but looking back at it I laugh every time. It didn’t frighten me from going into the water again but I was much more careful after that and the following year I did learn to swim and snorkel which became a great joy for me.