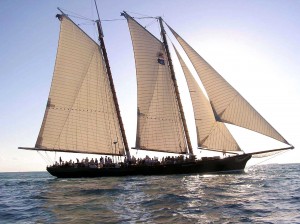 In 1850, an English merchant sent a letter to various acquaintances in New York City to see if anyone there was interested in sending a yacht to Britain for a race scheduled to coincide with the Great Exhibition of 1851. A group from the New York Yacht Club took up the challenge and commissioned a boat for the race.

On August 22, 1851, that yacht, a black schooner named America, won the race around the Isle of Wight off the southern coast of England and brought home the trophy which is now known as the “America’s Cup.”

The race that day in 1851, started at 10:00 and America made a rather poor showing: dead last at the start. However, over the course of the day, America pulled well ahead of the other fourteen yachts in the race. In fact,
when she crossed the finish line at 20:37, none of the other boats in the fleet were even visible. Prior to crossing the finish line, America passed the Royal Yacht, Victoria and Albert, and the crew of America dipped its ensign
to show respect to Queen Victoria and Prince Albert, who were watching the finish.

According to some accounts, the Queen asked which yacht was second. Someone on Victoria and Albert replied, “Your Majesty, there is no second.”