As you are aware, we are all facing economic hardships and money is tight. We like to drop anchor and come ashore a couple of times a week for a nice meal (something other than fish) We have had to tighten up our budget a bit and are now looking for alternatives. We passed some cruisers the other day and they suggested we try seagull. Are they any good? 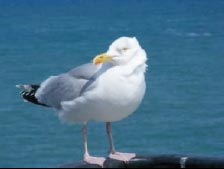 The common seagull, to dine or not to dine…

Interesting question, which reminds me of a story…

I was sailing solo one time from Bermuda making a straight shot to Anguilla. That’s a great course to navigate, just head due south and favor a little to the left. I missed once and landed in Tortola, which is an entirely different story.

Anyhow, I was becalmed about 300 miles north of the islands for a week. I hadn’t planned on staying at sea quite that long and my provisions were running a bit low. Like you, I was beginning to tire of fresh fish.

Well, as it happened that day, a sea gull had perched himself on my stern rail. The more I stared at that bird the more it started to look like a chicken. The hallucinations were causing my mouth to water and my stomach to growl.

I won’t go into the specifics involved, but let’s just say that a spear gun may be a bit excessive for this task. (Hey, I was hungry)

Well then, with a clean bird I head below and start the makings of a nice chicken stew. I took what leftover vegetables I had, which was half an onion, two limp carrots, one cup of dry beans, and a small can of mushroom pieces and stems.

I tossed everything into the pot with the bird and set it to simmer for a few hours. I spent the next three hours on deck cleaning up a scene that would keep the best TV CSI investigators confused. I don’t remember there being that much of a struggle, and I was never able to untangle the cord on the spear gun. I’ll just have to get another one, I suppose.

Anyhow, I went below to taste the bird. I got my bone knife out and cut a small chunk off. After about five minutes of chewing my jaw was starting to cramp. This bird would have to cook a bit longer. I remember my Grandma using an ad hoc pressure cooker of sorts once. She put a couple of bricks on the pot lid to speed up cooking. Not having any bricks handy, I used some stainless steel safety wire and secured the lid in place.

About a half hour later I was up on the bow splicing a jib sheet that had previously broken when I heard the loud pop. Running to the galley I discovered that the pot had literally blown its lid. The safety wire had held but split the lid right in the middle. The sea gull was lodged in the open portlight over the galley stove. The carrots, mushrooms, beans, and onions had long since merged into a gooey greasy biomass which had coated  the underside of the companion way hatch cover.

“Should be done now!” I said to myself and proceeded to taste the cooked delicacy.

So then, two major lessons learned.

1. Spearguns are for fish.

On a more positive note, the companion way hatch has never leaked since, and if you cut cooked sea gull into 1/4″ strips you can use it to repack your cutlass bearing.