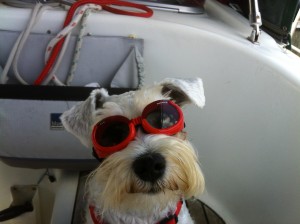 First let me say that we have had both dogs and cats enrich our lives over the years and like most old Texans we adhered to the custom of doing the deed when the time came for them to cross over. It was never easy to send an old friend to the next life and for that reason; we chose to let the herd diminish completely. We had several cats and two dogs when we started to get into sailing, first on a lake then in the Gulf. As they passed on we resolved to stay petless as we made plans for living the dream. We took note of how smart that was given the requirements four legged crew imposed on the upright crew. That cup of coffee in the cockpit at 0630 seemed much more enjoyable when watching other boat crews forgo the quiet time and take the boat dog to shore. We took note of the restrictions for such crew as to where they might tread and the paperwork to sail internationally with them. Yeah, it was a brilliant move on our part to live our dream without small crew. Thus it was when we boarded Why Knot and sailed around the Gulf and into North Atlantic waters. Certainly, we observed the rituals other boats observed for their four legged crews and it enforced our position.

As we reached the Keys, we noticed such places as Schooner Wharf Bar in Key West were pets were welcome. We noticed that they came in all sizes and all breeds. Some close friends had a Schnauzer named Boomer that basically ran the ship and liked hand fed ice. Hamish, of the S/V Rima had more sea miles than most upright crew and could remove a bottle cap faster that those with thumbs. Unknown to us, we were being re-programmed. We had an automobile accident in Wilmington that sent us home for several months for my mates back surgery and convalescence. During that time, things were intense with all the requirements of getting over spine fusion and there was little joy knowing it would be some time until we could go back to the water world. Several months passed with the only boating activities being the reading of the dominant sailing magazine by a real sailor named Bob and memorizing the pages of marine catalogs. We kept staring at the x-rays hoping to see signs of sufficient recovery so we could stick our faces in salt air. Then one day my Mate came home and said along the way that someone had Schnauzer pups for sale on the side of the road. She thought there was a Boomer clone in the box. With nothing else to do that day, we went back to look in that box. We debated on the way about our resolve to refrain from re-dogging until we sailed no more but one look in that box and all that when overboard. That seven month old white pup stared up and stole our hearts.

We brought him home and with only a few more weeks and one critical doctor appointment left until we returned to sea, we started to get to know Scurv. He started to train us and before long we packed him and our gear in the mobile storage unit. A quick 1,600 miles later we took him aboard. We were in a slip at Wilmington Marine Center. It is a quiet marina with alligators. We named one young one Mikey. Scurv and Mikey would stare at each other for long periods. We were careful to keep an eye on Scurv but because he is not a water dog, we felt fairly certain he would not attempt to swim with that thing with the big eyes. Training went well for him and he did not get overtly sea sick. He slept in the main saloon since we resolved he would not sleep with us. That lasted about a week until we made room for him after a really stormy night appeal to us to take the boogey man away. He ran the foredeck only with a leash and crew member in tow when we were underway. He slept a great deal after spending the say keeping bug population in check. He made friends easily since his whopping 12 pounds looked funny bobbing along with us. The good thing is that he does not bark easily but he does have a unique type of noise making known as Schnauzer scream. He learned to let us go ashore if only we would leave a chew toy with him.
Scurv turned out to be way less of a burden that we thought. He learned the boat and refrained from chewing stuff not intended for him. His biological clock is almost perfect when he awakens us at 0630 by sniffing my ears. Up, that’s when the day starts and he is all play that early. He is in charge of security and is actively looking for our boat troll that keeps stuff lost. As such we have bestowed the rank of ABSD: able bodied sea dog. He has brought us many hours of entertainment and joy. Indeed, we have found the error in our thinking before Scurv. His compact size, temperament and generally electric personality has brought a very good dimension to our cruise. If only he had thumbs.

By
Cooper
S/V Why Knot