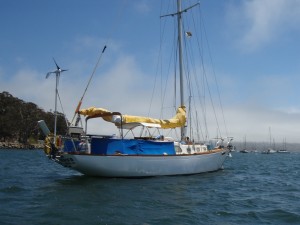 I was sailing down the California coast in my refurbished 37′ S&S cutter, Cadence II, when I stopped in Morro Bay for a hot shower and a good burger.  There I met a man who would become one of my closest friends, whom I call Eric the Red.  He was in his early thirties, athletic and bold, 6’+ with long red hair and a linebacker’s build, sailing north to points unknown.  A spitting image of a modern-day Viking.  I was 28, restless and recently single, blowing south with the wind to points unknown, so naturally we quickly became thick as thieves.  For a month we stayed on the yacht club moorings, playing with boats by day and terrorizing the town bars by night. 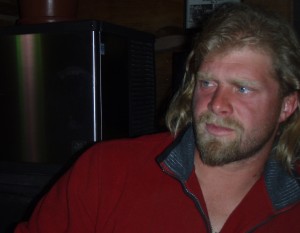 It was 11pm on one of those cold, dark Morro Bay nights and I was bundled in my bed reading when a knock came at the side of the boat.  “Come aboard,” I said, and moments later the boat lurched as Eric the Red hauled his 230 pound frame over the gunnels and onto the deck.  As he came down the steps, I spied in his hand a brand new bottle of Rumple-Minz peppermint schnapps, a drink which had been an accomplice in many of his stories of wilder, younger years.  It seemed that every time Rumple-Minz was on hand something story-worthy (read: dangerous) had happened, so I took it almost as an omen that he’d brought some.  However, tonight we were detoxing from a long weekend at the bars so we each had one, and only one sip.  We thought, “what harm could a single sip do?” (Okay, so maybe I had two…) 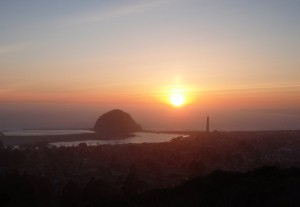 We talked of women, sailing and life for an hour or so, then I followed him on deck to see him off.  The tidal current was ebbing at 3+ knots, flowing directly from his boat to mine, so he would have to paddle upstream, and paddle hard if he hoped to make it home.  His dinghy, which came with his boat, was an inflatable rubber ducky of a boat not more than 6 feet long with wimpy plastic oarlocks, that rowed about as well as a stuck pig in mud.  Nevertheless, he decided to give it a go – he could always return downstream to my boat if things weren’t going well.  Pushing off the side of Cadence he grabbed the diminutive toy paddles and began splashing at the formidable Morro River in a valiant struggle to get home, while I looked on, just in case.  He was half way back to his boat when the port-side oarlock abruptly gave way with a resounding “SNAP!”   The paddle went swinging through the air, and Eric was thrown off balance.  He leaned back on the bow to catch himself, but the diminutive dink couldn’t handle the forward shift in weight and the stern lifted from the water.  “Ker-splash!”  The whole dinghy flipped end over end, and with his feet in the air he plunged backwards, head-first into the drink.

“Arrrrgh!” thundered Eric’s best pirate roar as his head broke the surface and he shook the sea from his hair like rain from a lion’s mane.  “Dane!” he bellowed.  Clutching the dinghy, the current was rapidly hurtling him toward my boat.
“I got’cha!”  I assured him.
Locked in the current, he tore by Cadence’s mooring and snagged the mooring line with his one free hand.
“It’s alright, just let it go!”  I said as I stooped and put my hand out over the side of the boat.  Within seconds the current brought our outstretched arms together.  Now firmly holding onto Cadence’s toe rail, he handed me the tether to his inverted, one-oared dinghy and I effortlessly flung it on board.
“It’s f-#k’in cold.  Do you have a ladder?”
“Yeah, hang in there a sec.”  I got the flimsy, plastic dumpster-discount ladder clipped in place and with my arm under his shoulder he hauled himself aboard and stood, sopping wet and shivering in the cockpit.  Sure enough, the Rumple-Minz had worked it’s dark magic again.

“Get those wet clothes off, I’ll find you some dry ones.”  Fortunately for him my little brother, Boz, is actually larger than I, and he’d left some extra garments behind from when he was on board.  Nonetheless, Eric the Red barely squeezed into them.  Thawing out under some blankets in his new undersized fleece pants and flannel, he said pensively,

“Man, I could’ve been sucked out to sea.”
“That’s a fact.”
“You saved my ass.”
“Ah, you’d have grabbed something or swam to shore. You’d just be a hell of a lot colder right now.”
A long pause…
“My keys were in the dinghy.”
“We’ll get a diver to look for them tomorrow.”
He turned and took a long look over the dark water of the bay.
“They were on a floating key chain.”