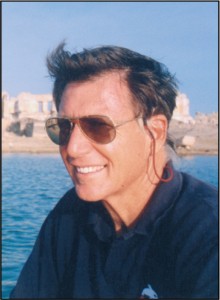 It is incredibly difficult to start something new, so my hat is off to Bob and Jody for starting this new venture. That difficulty in taking that first major step is also what is preventing a lot of people from going cruising. There is always something that looms large and suggests the easy way out of delaying to the next year, at which time the next problem will arise, and so it goes.

My wife and I bought “Dolphin Spirit” and started planning. We had a firm start date, two years out, but then we thought Ryan wasn’t old enough, then we needed another year or so to put more money in the kitty, then a couple of business ventures needed more of our time, then there were the upgrades to “Dolphin Spirit” that were taking more time, then my wife died of cancer.

The lesson here is that there are always apparently good reasons for putting off something you really want to do, but most really are not “good reasons,” just fears of the unknown. If Bob and Jody can venture into the uncharted areas of a new business venture, then surely you can set off into the very well charted seas of cruising.

Let me help you debunk the top “I am putting off going cruising because …” excuses.

My boat is not ready: Your boat will never be ready. No cruiser ever has a To Do List that contains less than 20 items that need immediate attention. It is true that these are not major, “the boat will sink if this isn’t fixed” matters, but you should look at your list and separate the “must have” from the “it would be nice to have” and see how rapidly it shrinks to manageable proportions. A good general rule is if you have nothing to fix then there is something you are not thinking of.

We don’t have enough money: You never will. Woody did his circumnavigation and it cost him about $500 per month. Ours cost around $4000 per month. If I had restricted my expenditure to Woody’s level, I would not have made it out of Marina Del Rey before being served divorce papers. The point is that the lifestyle you enjoy on land is the lifestyle you should adopt when cruising. That lifestyle will cost less when on the water, but it will still cost. So what if your finances say you can’t cruise for more than two years, cruising those two years will be the single best thing you ever did, with no apologies to your wedding day.

My wife doesn’t really want to go sailing: Have you considered that this may be your fault? Is your boat set up for speed or comfort? Do you ease sails to reduce boat heeling when your wife is cooking or when you are eating? Do you act like Captain Bligh as soon as you set foot on board? When you are at the dock and it is blowing 35 knots, do you tell your companion that there is nothing like sailing in a brisk breeze, or do you offer to take her shopping instead? The key word everyone needs to know is “compromise.” A cruising boat is your home for protracted periods and therefore it is probably desirable that it be comfortable for all who sail in her. A very important factor is your wife’s trust in your capabilities. If you can’t repair a dripping faucet at home, then she is not likely to believe you can fix a problem 1000 miles from land.

You have to be a great sailor: Not true. I am very pleased to tell you that cruising is not about sailing – or indeed about motoring, for those who cruise in powerboats. You will be sailing for less than 10% of the time you are cruising, with the remaining time spent stationary, attached to land in some fashion. Sailing is simply the best and least expensive way of moving your home to a place where you want to spend some time. If you can competently go for a day sail now, if you can anchor without a shouting match and wake up in the same anchorage you went to sleep in, and if you can repair most of the common breakages on board, then you are probably ready to start planning to go cruising. Note the last part of that sentence.

The world is too unsafe to leave home: Not true now and never has been. The South Pacific is the best cruising ground in the world and perfectly safe. Certainly you have to “lock it or lose it” in the Caribbean and Mexico, but that has always been the case and it doesn’t mean you are in physical danger. The Mediterranean offers some of the greatest cruising areas in the world – South-West Turkey, Sicily, the Aegean, Spain and the Balearics – and there is absolutely no truth in the story that you can’t sail in the Med. You can, but you the wind won’t let you go where you want to. Just as you won’t go to certain parts of the city or town you live in, there are some parts of the world that are, and always have been, dangerous, so don’t go there. It is a great big wonderful world that is there to be enjoyed, not feared

The pirates will get me: They already have if you have shopped recently at a marine store. More seriously, there are defined pirate areas – the coast of Somalia and around the Horn of Africa, the Malacca Straits, the South China Sea being the most notorious – and these can be avoided mostly. The exception is the Malacca Straits which have to be transited to get to Malaysia and Thailand. There, traveling with buddy-boats and exercising reasonable caution will get you through. Another general rule is to always travel with at least one other yacht if you suspect pirates may be in the area. Pirates are more interested in tankers and cargo boats than they are in yachts.

What about bad weather: We sailed over 44,000 miles around the world for more than six years, and never struck sustained winds at sea of over 25 knots. Sure there was some luck involved, but mostly it was the result of preparation and, most importantly, patience. Know how to read a weather map (Bob’s seminars will teach you all you need), know how to use both SSB and VHF radios to ask people’s advice, talk to the locals, and then, at the very end, trust your instincts. We waited three weeks for the proper weather window, then did the Baja Bash non-stop with perfect winds and calm seas. You are cruising, and the next harbor will still be there next week, and probably next month as weel.

My children are not old enough: What you are really saying is that they aren’t old enough to have left home so you can go cruising without them. That is so wrong on almost every level. Ryan was 8 when we left, 14 when we got back, and didn’t want to stop. He was scholastically about two years ahead of his peers, in maturity, several light years ahead, and suffered only because he had never played the team sports of baseball and football. I say suffered, because, in some circles, apparently knowing how to throw a football accurately is more highly regarded than knowing the culture, history and some of the language of 56 countries through living in them for long periods. Take your children with you. They will make your enjoyment so much deeper and stronger.

Summary: That’s it then, no excuses left. Bob and Jody looked into the abyss and saw the sturdy bridge that spanned it. You can do the same. That first step is always the hardest, but once you have taken it, you will be so thrilled.