This is what I wanted but could not afford. 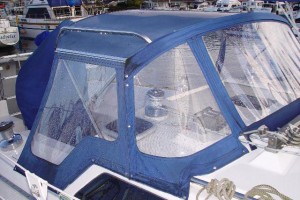 After reading a story on Sailblog.com about building a hard dodger, I decide to give it a try myself.

The first step is to acquire a soft dodger frame. I was lucky enough that a friend (Charlie Silver, Owner of Marina Sailing in Newport Beach, CA) gave me a nice 1” stainless steel dodger frame. Thanks again Charlie.

The next step was to buy a 4×8 sheet of fiberglass reinforced panel Home Depot. This had a smooth side and a side with a texture (cracked ice). I sanded both sides, but I put the textured side up where I would be adding fiberglass cloth and resin. I laid the sheet of frp out on my garage floor and started sanding with 80 grit sandpaper. After smoothing the texture side and removing any coating on the frp, I flipped the panel over and repeated the process on the other side. I ended up with a sheet of frp about 1/16” thick.

I then drilled 3/16” holes in several places in the frp, so I could use plastic wire ties to attach the frp to the frame. 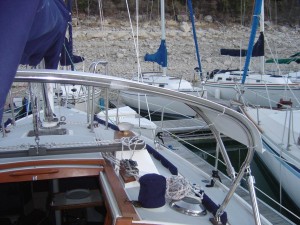 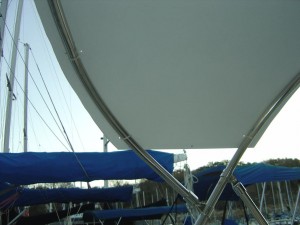 I also used some 1” aluminum “L” metal, which I pop riveted along the edge, to make sure that the ends of the frp remained straight.

At this point I noticed that I had cut the frp wrong on one side. Damn! 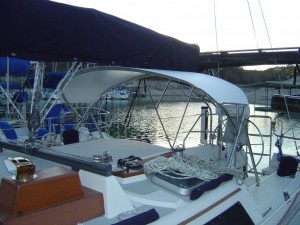 You can clearly see, in the photo above, that the port side is not level and is cut higher than the starboard side. This would be the point when you remember your father telling you to measure twice and cut once. I should have gone back to Home Depot and bought a new sheet of frp. Instead I cut a piece to fix the mismatch and pop riveted it in place. You can see the back of the attached piece in the photo below. 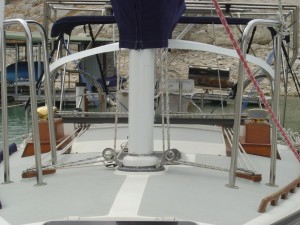 I also decide I wanted a “lip” on the forward edge. I felt that this should make the dodger stronger and when the windows were added later, would help keep any water out. I laid the remaining frp over the top of the dodger and marked a 3” wide piece to attach to the forward edge. I cut a number of 4” pieces of 1”x1/8” aluminum and bent them to a 40 degree angle (I think it was 40 degrees). Each piece of aluminum got 3 holes drilled and the leading edge was pop riveted to the rest of the frp dodger. Something very important, which I almost forgot, is making sure the pieces of aluminum that hold the lip do not become glued with resin to the underside of the frp. I placed blue masking tape on the top of each piece of aluminum. That way the worst thing that would happen is that I would glue the masking tape to the frp. 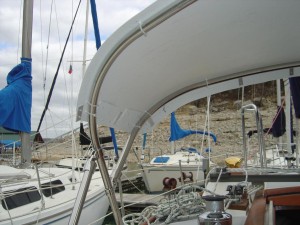 I was concerned about fiberglassing over the plastic wire ties. My original hope was that I would be able to pull the wire ties out and fill the voids. The more I thought about this the more it seemed like a bad idea. During one of the many trips to Home Depot I noticed stainless steel wire ties. Since these were flat and very thin, I decided to use them instead to attach the frp to the dodger frame. If they could not be removed, they would not create a “bump” in the fiberglass and they would not rust. This worked out very well. 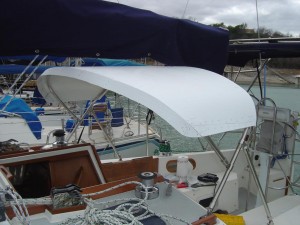 I had decided that I wanted to add the fiberglass in two stages (both on the boat) and sand everything smooth between the stages. I would add several alternating layers of 8 oz fiberglass cloth and heaver Bi-axel cloth. Then I would drill out all the pop rivets and remove the aluminum angles. I sanded everything smooth with 80 grit sand paper on a Makita palm sander. A little blue masking tape across the bottom of the holes and then finish the fiberglass layers. I bought some 6 oz (fine) fiberglass cloth to try to give the surface a very smooth finish. 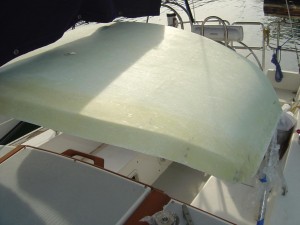 If you look closely at the lip and forward edge, you can see a discolored area. This is because I used three layers of fiberglass tape before starting the actual cloth layers. I bought 3”, 4” and 6” inch tape and covered the area of the lip and the forward edge of the dodger with increasing widths of tape. It was hoped that this would strengthen this area as well as adding more curvature to the lip area.. You can also see the dark spots where I drilled out the pop rivets before adding the next layers of cloth. I used MAS epoxy with a slow hardener. The temperatures were in the 70s and I was able to add 6 layers of cloth during each of the two stages (12 layers total). The cloth (both types) should be already cut to size and a roller to work out the bubbles helps. I had to work quickly but never felt like things were out of hand. Working the cloth around to lay flat did not present a problem.

Although I have already removed all the paper drop cloths I used to cover the deck, you can still see that I wrapped the dodger frame in plastic wrap to keep off the fiberglass resin. The drop cloths were not 100% effective and if I was to do this again I would either add additional layers of drop cloths or mount the dodger frame on a workbench on shore. 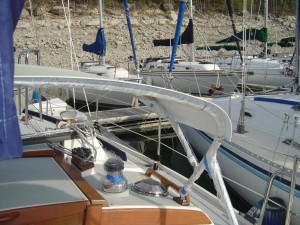 In the picture above you can see some of the stainless steel wire ties. 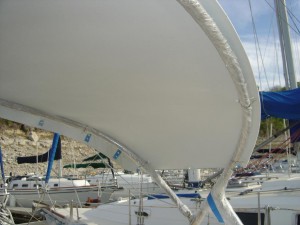 This photo again shows the stainless steel wire ties. You can also see that the masking tape on top of the aluminum pieces holding the lip were indeed glued to the frp. 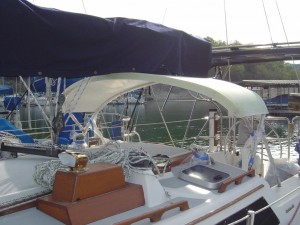 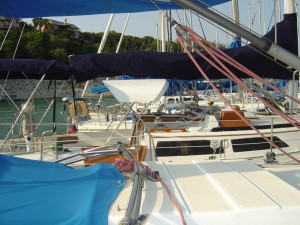 After sailing with the hard dodger several times I have lowered it by another 3” and moved it forward by about 2” vs what you see in the picture above. 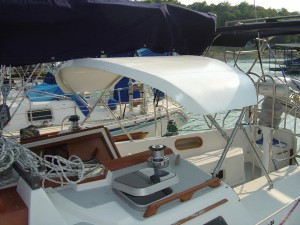 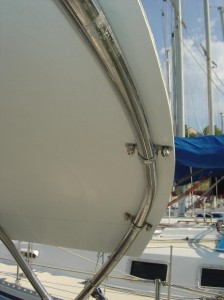 I purchased 1” stainless steel metal pipe clamps from McMaster-Carr (part #8874T44) to attach the hard dodger to the frame. I used 1/4”x1/2 ”stainless steel carriage bolts and used a square file to file the holes square. The pencil line you can see was drawn to help mark the location for the mounting holes, it’s not a flaw in the hard dodger. 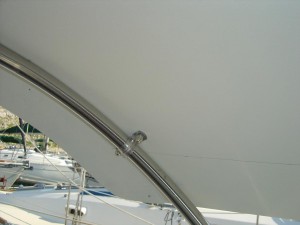 There are a total of 8 of the pipe clamps and 16 carriage bolts holding everything together. 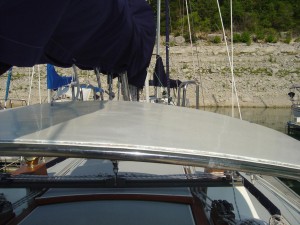 You can see in the picture above the thickness off the frp vs the fiberglass layers on top. The white layer on top is the PrimeKote primer. I had not painted the edge yet. 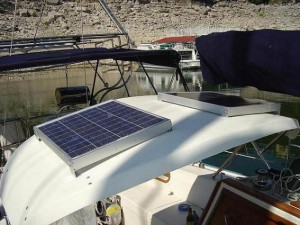 This picture shows the current state of the hard dodger project. I still need to do some more sanding and then go back and paint the dodger with Interlux Perfection epoxy paint. The hard dodger is not perfect, but was well worth the effort and the $400 involved.