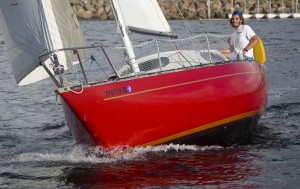 I was out sailing with a friend this past month on an old quarter-ton-class racer from the 70s. He invited myself and his date along to take a sunset sail past the breakwall towards Santa Monica on a gorgeous summer evening.

She was a confident, attractive young actress who was energetic and quick to engage in the conversation at hand. Behind her shining white smile was someone who was clearly up for an adventure – willing to grab a line or sit on the sidelines – whatever worked.

On the way out of Marina del Rey’s main channel the three of us conversed and our svelte thespian negotiated any topic with social skill. She had been interviewed on red carpets and junkets and wasn’t shy about laying down an opinion or two. Appropriately the sun’s position was nearing what film people call the “magic hour” where natural light becomes perfect. It’s a wonder of nature how the yellow hue of the setting sun mixes so perfectly with human skin at this particular time of day. Shadowless and gentle, the cooling star makes us as beautiful as we can possibly be and in this light it was clear we were in the company of a true film actress.

As we passed the breakwall into a rolling three-foot swell it wasn’t long before she was heaving chunky gross regurgitated food digested probably about an hour ago. Her pretty head hanging over the rail blowing bile into the sea. Her opinions now suppressed by the forceful involuntary liquid shooting from of her mouth. We sailed under the quiet sky as she growled and spit like a rabid animal. Thin glass-like lines of saliva connected her lips to the ocean’s waves and all vanity was lost to the demon within.

Ah well, as we know, life doesn’t always go according to script. Sometimes it’ll getcha. When we reached calmer waters she took a swig of water to rid her tongue of the acid that lay there, fixed herself like only a woman can and carried on – worse for the wear perhaps but better for the experience…