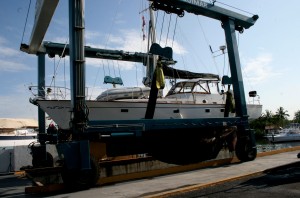 Into the life of every cruiser comes the dreaded day that the boat needs to be hauled out and worked over. Our day came recently in Puerto Vallarta, Mexico. Our Aleutian 51 Mermaid was built in 1976 and had been undergoing an extensive refit over the past couple of years. This was the final step and we wanted to make sure that everything was in tiptop condition. We had waited to put on a new bottom until we were south of the border to take advantage of the lower labor costs and were going to do a thorough inspection of everything below the waterline while we were hauled out. We also planned to replace several of the 35 year old thru hulls. After asking many, many questions of the cruisers who have been here a while, we decided on a work crew and chose a boat yard. We expected to be out of the water for about a week so we rented a condo in the marina and made the short trip from Paradise Village Marina across the bay to the boat yard early in morning. As we motored into the channel we were happily surprised to find the travel lift and 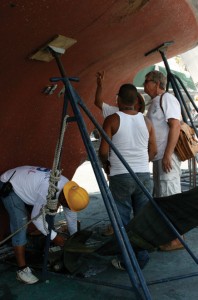 crew ready and waiting for us at the appointed hour. We found the crew at this yard to be very professional and friendly. Off to a good start… The lift out of the water went without any flaws, the power wash done and the inspection began.

A close examination of the bottom confirmed that it was time for a bottom job. The boat had been painted numerous times over the years and had accumulated more coats of paint than we could count. During the inspection we also found a couple of unexpected issues. OK, we knew there would probably be a surprise or two. During the power wash, part of the boot stripe came off. Hmm… going to have to get that taken care of. However, a potentially serious issue was discovered when we found that there was a small amount of play in the rudder shaft. We’d also replace all the zincs and repack the stuffing box but our Maxprop and cutlass bearing looked to be in good shape. 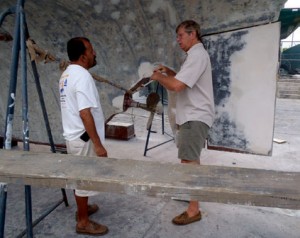 OK, we decided to remove all the years of bottom paint and even the gel coat to get to the fiberglass, epoxy prime the bottom then apply new paint. The rudder would have to be taken apart to determine the problem and the boot stripe was easy, we’d have it repainted. New quotes were made and after a little haggling the work all began.

The air conditioning and ample room in the condo was a welcome relief. I forgot to mention that we hauled out in July and it was very hot in Puerto Vallarta. Not wow it’s a beautiful day let’s have a picnic hot but broiling, humid, can’t go outside without getting soaked in sweat hot. We unpacked and settled into what would become our home near the boat yard during the haul out. Every evening we walked to the yard, stopping along the way to purchase a cold beer for the crew. This was a little insurance to keep the guys at the boat working until quitting time, create some good will and hey, there’s just nothing better than a cold one after working in the heat all day. It seemed to us that there were more guys each day. 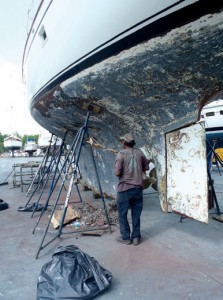 Removing all the years of bottom paint was a huge undertaking. Mermaid has a modified full keel and there’s a lot of bottom on the boat. Barrels of neon green ooze were shipped in and applied to the bottom removing most of the paint. Mermaid was then tented and the gel coat was sanded off. Next, a couple of coats of an epoxy primer were applied to the hull. Then the bottom paint layers went on. 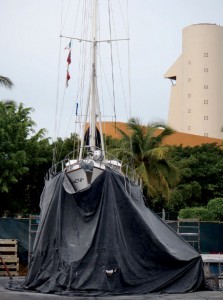 Meanwhile, the rudderpost was removed and we found the problem. One of the bolts securing it had some corrosion and had sheared off. In the six months before the haul we had come down the outside of the Baja as well as cruised up into the Sea of Cortez and then down to Puerto Vallarta. We felt lucky to have discovered this during the haul out; it could have been disastrous at sea! We decided to replace both bolts. The rudder was repacked, put back together and was as good as new. Another bullet dodged.

Once the rudder was repaired, the work on the thru hulls began. As the old thru hulls came out they looked fine to the naked eye, so who knows if they needed replacing? At least we’ll sleep better not having to worry about them. New thru hulls went in and were epoxied into place. We decided to remove a paddle wheel that had not been in use since we purchased the boat 10 years ago. The fewer holes in the bottom of her the better. The paddle wheel was removed the hole ground out, epoxied and fared.

The boot stripe was the next item on the list so the tape went on and the painting began. When we came by to inspect, we pointed out that the new paint between the stripes was a different color than the rest of the hull. It was white where the hull was an off white. The painter was called back and finally agreed. We told them the name of the paint we used on the hull and they were able to match it. 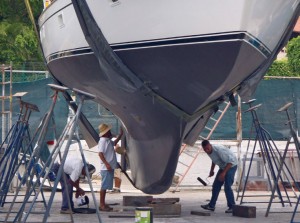 Each afternoon after returning from the boat yard we floated in the lovely pool and wondered how the guys were able to do all they were doing in such heat. It was so hot and humid we thought it unbearable and we weren’t doing any work.

Finally, all the thru hulls were in place, the rudder was ship shape, we had new zincs, the stuffing box was repacked and the bottom paint all on. It was time to launch. We were on the schedule for a 10:00 am launch and were at the yard at 9:00 am. We paid the bill and waited. The crew was at the travel lift ready to go but it seemed that the lift had run out of gas and the truck hadn’t come to deliver more gas yet. So, we waited and waited. We have a saying for these kinds of things. We looked at each other and said “TIM” – short for This Is Mexico. Sometimes things move at a slower pace south of the border. Just roll with the punches and all will come out well. It did. The travel lift finally got gassed up and lifted Mermaid. The supports were removed, a final touch of paint was applied where they had been and Mermaid was actually being moved to the launch area. She was lowered back into the water and all thru hulls were tested before removing the sling from the lift.

After 11 days in the yard, it felt so good to leave downtown Puerto Vallarta and head back across Bandaras Bay to Paradise Village. After clearing the port and traffic it was time to check once again on the engine room and all thru hulls. Much to our surprise there was a thin stream of water spraying into the engine 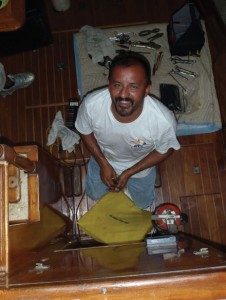 room. One of the raw water coolant lines was leaking. Not what you want to see when you’re on the water but it wasn’t bad and the bilge pumps were doing their job. A quick phone call to the yard and we decided to head to our slip and have the workers meet us there.

We arrived back in our slip after a worrisome trip across the bay and as soon as the dock lines were secured an iguana hopped aboard looking as if he had missed us. Glad to see you too but we have got to figure what was going on with the leak. We quickly closed the thru hull to the engine and discovered that sometime during the haul out the raw water line had been moved and ended up against the transmission shaft, which became a saw blade. A new hose was quickly installed and Mermaid was finally back in commission and ready for her next adventure. 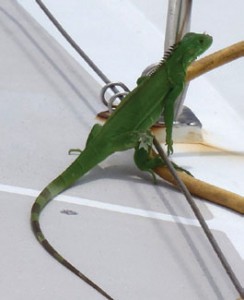 Hauling out in a foreign country has both challenges and benefits. The boat owner can take advantage of lower labor costs and get quality work done but you have to make sure that you know whom you’re dealing with and that the facilities are adequate for what you need to have done. You’re not in Kansas anymore and the quality of the facilities and workers may vary significantly. Don’t be surprised when things take longer than planned. Our week long haul out turned into 11 days. Our philosophy is to maintain the boat so small issues do not become big problems later. Be sure to ask about the experiences of others who’ve hauled out and get their recommendations about where to haul and who can provide quality work and you’re on your way to a successful haul out.