Ocean rowing is one of those rare sports where it is possible to compete at an international level without any prior experience, or even proof of the basic skills required to succeed.

The only prerequisite for entry in an ocean rowing race seems to be a tinge of madness perched on an excess of bottle. This may explain why Britain, my own motherland, ranks among the great ocean rowing countries. If there is a bloody stupid adventure inprospect, Brits tend to be the first to embark on it.

There are of course more comfortable ways of getting to the West Indies. Yet there always seem to be a few crazy Englishmen and women willing to leap aboard a rowboat and set off into the great unknown – many with absolutely no sea going experience at all.

In case you are one of them, this is how it is done…

Taking a trip with your family is so much fun and if you have young children you will be able to tell a beautiful family story in the future! You will know that there are some activities that they cannot take part in due to the danger of the activities, however, there are some fun activities that young children can take part in. Take a look on Youtube and watch some of the great worldwide adventures that children can embark upon with you or perhaps you would like to just stick to an adventure of your own…

First of all, you will need to decide whether to join a race, or to risk going off on your own. This is a tricky choice. Many would-be rowers find the structure of a race reassuring, not least because much of the bureaucratic red tape will be handled by organizers like Woodvale Events www.woodvale-challenge.com or the Ocean Rowing Society

www.oceanrowing.com rather than the enthusiastic but inexperienced newbie rower.

Frankly, most applicants don’t know their aft from their elbow, and will have enough to doorganising themselves and their boat.

Tagging along with the rowing equivalent of the ARC gives many an average (for an ocean rower) Joe access to the sport. It takes a really outrageous degree of dedicationand fortitude to organise a crossing entirely on your own, and this is an exclusive club not many have chosen to join.

Of the 294 completed ocean crossings, some 75% have been achieved within a race structure.

In races, rowboats are backed up by a support yacht. The support given should not, however, be overestimated.

The yacht is more useful as a reassurance to families at home than as direct support to the rowers. It is generally hundreds of miles from the nearest crew, which is more than can be said for passing tankers.

The yacht and her immensely capable crew are, however, instrumental in preventing dramas from turning into crises – by replacing broken oars, guiding teams through medical incidents, offering advice on failing watermakers, and dispensing aid and comfort by satphone.

Once you have decided that you will take part, you will need a boat. In early races, crews had no choice; there was only one design on offer, the Rowsell and Morrison “Atlantic Rowing Race” design. This arrived on the doorstep as a flatpack, with an instruction manual the size of a telephone directory.

The ARR, as it has become known, is now synonymous with the sport It is about 23ft long by 6ft wide, designed .to accommodate two people with their stores, and to allow simple construction worldwide..

When I first saw it I was horrified at the idea that only 10mm of marine ply would separate me from water seven miles deep. The ARR is quite a big boat to row. Fully laden, it can weigh upwards of a ton. Living on the boat is best described as camping at sea, except that instead of hills and cows, it’s waves and whales.

I do not come from a yachting background, so all the technical stuff made a steep learning curve for me, For my first attempt we decided to buy a secondhand boat -there was no way I was going to sea in anything I had glued together myself, and furthermore there seemed tobe a faint chance that a boat that had made the crossing before might remember the way.

In the months leading up to the start we refurbished our craft and fitted solar panels to power the car batteries stored in the cabin. We updated our electrical equipment, VHF, satphone, GPS, and we installed the PUR40 watermaker that would supply a decentquantity of soapy-tasting dishwater for the journey ahead, providing the sun shone.

Emergency water supplies -sealed bottles of potable water only to be broken open in a dire emergency served as our ballast. This was specified by race rules. It was intended to stop zealously competitive rowers from ditching their ballast to lighten their load and achieve a swifter crossing, removing in the process the self-righting capabilities of their craft.

All the electrical gubbins was stored in the cabin. This is a space roughly the size of a two-man tent. You can’t sit up inside it, and it almost instantly becomes as hot, sweaty and smelly as a Turkish sauna. It is, however, your only refuge from the full force of the ocean.

Personal modifications to the boat generally fall foul of the race rules, but its colour is entirely up to you. It always surprised me that many contestants sported the soothing wave-like hues of white and blue. Camouflage was not my plan.

I decided on dayglo orange for the first trip, and .great in peril, pink for the second, on the grounds that if it all went wrong, the rescuing tanker would find it easy to spot us among the rollers.

Plan as you may, nothing can prepare you for the difficulty of the journey. Although rowers may spend a year and a half physically training, no rowing machine can replicate the constant, demoralizing day-to-day plod, let alone the despair when the wind blows in the wrong direction and you find yourself heading for Africa instead of the Caribbean.

And don’t even think that you’ll have the opportunity to lament your woes with fellow rowers! Within twenty minutes of the starting cannons boom, the fleet will have disappeared among the nauseating chop of the Canary Islands acceleration zone.

Any promises to call you made on the pontoon are soon forgotten once you’ve settled into your schedule. For racing crews, two and half hours sleep on the night shift is generous. You can barely speak to the person sitting in front of you, let alone have a jolly conversation with the lads on Two Blokes No Smokes or Atlantic Warrior.

Routines differ from boat to boat, but most bottoms only last two hours in the saddle. 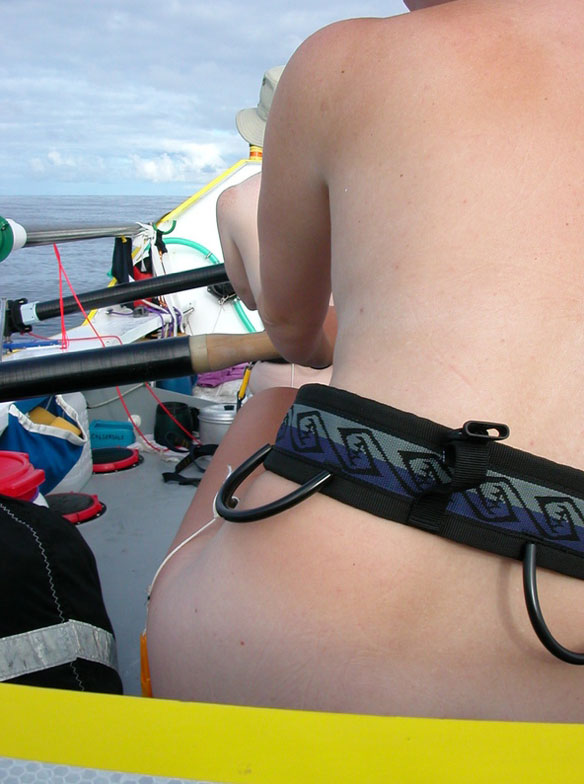 People tell you that the first two weeks are the worst, and they are right. If you can get through that fortnight, you will make it to the end.

The seasickness, exhaustion and diet of dehydrated food take their toll early on. When you adapt, the deprivation can turn into a liberation that gives you a deeper appreciation of the life you left behind –apart from which, the voyage has a value of its own.

I mean, how often do you get to see all the phases of the moon, from jaw-dropping fullness, to grinning sliver, to spangled black absence?

How often do you get to swim with passing whales, or coax a noddy bird to sit on your head?

Or spend your nights rowing through space – for rowing an ocean at night is like being at sky, not at sea. You are so low to the water that you are almost entirely surrounded by the heavens.

You have the sensation of flying, with only the gentle lapping of water and the distant calling of whales to remind you that the ocean lies beneath.

There is, however, a downside.

Having spent six months in a rowboat the size of a small bathroom I can confidently assert that the sport is not one for the glamorous. My own bottom, which I have pampered and treasured for its peachiness, was ravaged by the hardships of life at seainto a bumpy, boil-cratered lunar landscape. My hands, once delicate and feminine, became claw-like and blistered. My voluptuous curves were replaced by sunburnt skintautly stretched over a jutting skeleton.

“If you want to lose a lot of weight quickly and aren’t too fussed how, twelve hours of rowing a day on a diet of dehydrated army rations is definitely worth considering.”

You may by now be asking yourself whether you are the ideal candidate for a trip acrossthe tropics in a 23ft floating bathroom. To help you make a judgment, here are a sample of the personal qualities required:

1.Expendable bottom.
2. Few or preferably no marbles.
3. Little or no sea experience.
4. Bloody-minded determination of Attila the Hun.

If you tick these boxes, then source the equipment, learn the skills, and set oars armed with one thought only – to make it across. The series of decisions that carries most ocean rowers from ignorance to enlightenment takes about a year and a half. Much of that time is spent raising money to fund the trip. It costs £50-£100,000.

There aren’t many people with that sort of money hiding between the sofa cushions, and certainly I didn’t have it. There is, however, an important piece of advice handed out by the rowing fraternity: if you can get to the start, then you can get to the finish.

The above is an outline of how do do it.

Perhaps a better question is why.

On the face of it, nobody in their right mind would sanely chose to take on a mighty ocean in a tiny wooden rowing boat. George Mallory and subsequent thousands ofadventurers have claimed that they did whatever they did because it was there.

I can unequivocally say that this is not the reason I spent almost five years of my life rowing or planning to row the Atlantic.

A Trip to Mexico