Crowds gathered to wave off The Lord Nelson as it set sail to become the first vessel of its kind
to voyage around the world with a crew of disabled sailors. 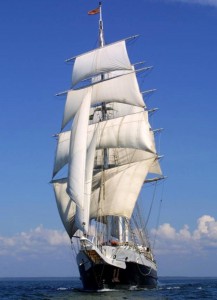 As the The Jubilee Sailing Trust’s (JST) ship Lord Nelson left from Southampton, Hampshire,
for its 23-month 50,000 mile journey about 150 people waving Union flags lined the dock to bid
farewell to the ship and a small flotilla of yachts accompanied it as it sailed out of Southampton
Water.

It set sail for Rio de Janeiro at 11:50 BST, the time that Admiral Lord Nelson hoisted his final
flag signal to the fleet at Trafalgar to “set all sails possible with safety to the mast”.

A crew of 50 people, of mixed physical abilities, including wheelchair users, will sail the ship
on the two-year voyage.

The 55-metre ship, which is the first tall ship to have been built to enable physically-disabled
and able-bodied people to sail side-by-side, will visit more than 30 countries on all seven
continents and cross the equator four times during the trip.

Everywhere the ship and her crew go, they will be an ambassador for disability awareness and
diversity.The project, called the Norton Rose Sail the World Challenge, will be completed in 10
main ocean passages, which will take up to two months each.

The first leg is from Southampton, across the Atlantic, to Rio de Janeiro, from where the ship
will set sail for Cape Town in South Africa.

One of those taking part is 69-year-old Beryl Jones, a retired disability adviser from Anglesey,
Wales, who suffers from multiple sclerosis.

She said: “My grandfather was a sea captain who sailed the world and I guess at this late stage
in my life I am following in his footsteps, this voyage will provide adventure, involving almost
every activity on board. Scrubbing the deck and potatoes, washing dishes, setting the sails,
keeping watch and peering from the crow’s nest – a thrill of a lifetime. I am looking forward to
the whole experience.” 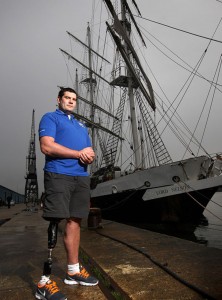 Alan Henderson, who lost his right leg while serving as a Royal Marine in Helmand province,
Afghanistan, in 2010, has joined the crew.

He said: “I just thought I had to get involved with this charity. “This will give me the chance to
see parts of the world I wouldn’t otherwise see. It’s an important part of my rehabilitation and a
major goal which will hopefully see me on my way to recovery.”

Supporting the voyage are broadcaster Peter Snow, world explorer Sarah Outen and expedition
leader Skip Novak who will pilot the Lord Nelson when it sails to the Antarctic in 2014. 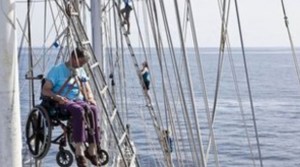 Special features on board the ship include wheelchair lifts between deck levels, a talking
compass and a professional crew trained in the techniques of enabling people of all physical and
sensory abilities to join in such activities as setting sails, navigating, steering the ship and
keeping night watches.

The ship will also visit Antarctica and travel around Cape Horn.

We wish them fair winds and Bon Voyage

The BVI from a Teen’s Perspective (86 Photos)