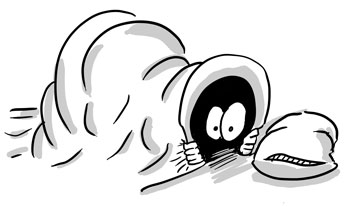 Have you ever noticed how many really great boats sit in their slips every weekend, week after week, month after month and year after year? There is a reason for that. Not a good one, but a reason none the less.

Fear has kept more adventures from happening than any other single thing. What’s sad is what most folks fear is the unknown.

Adventure is going out into the unknown and making it known. For folks who fear the unknown, they will never experience adventure.

I remember when I got my first boat, a Cal 28, I used to think what a great experience it would be to sail to Catalina Island. It sat there, taunting me, just 26 miles across the channel. I wanted to sail there, but I was nervous. Nervous is fear wearing a satin jacket. A lot of folks don’t recognize it.

My first sail to Catalina Island was a real adventure. It was as exciting as any voyage I have ever made since. There was no real weather to speak of, nor were the seas high. There was no fog, and even the freighter traffic was nonexistent.

What was exciting was the fact that I learned there was nothing to fear out there. In the 30-odd years since then I have sailed hundreds of times to Catalina, but no trip could ever equal that first one, when I conquered my fear of the unknown voyage of 26 miles, and learned the most important lesson of my life.

A few months later a buddy called who was crewing on the 74’ square-rigged, topsail schooner Stone Witch. He told me they were putting together a trip to Central America, and he wanted to know if I wanted to join the crew.

My first thought was to say no. In the ‘70s Central America was a hotbed of bad news. Of course, back then I actually believed what I saw on the news!

But I choked down the fear and signed on. A few months later, as we sailed into Guatemala and El Salvador, I felt as at home there as if I was in my mother’s loving arms.

Yes, you can feel securely at anchor. But show me a sailor who isn’t ready to hit the deck running if he hears an unusual sound while in a strange anchorage.

And so we walk the docks of America, and see hundreds and hundreds of boats sitting in their slips or on their moorings for months and years on end. Dreams unfulfilled.

“Life is either a daring adventure or nothing.”