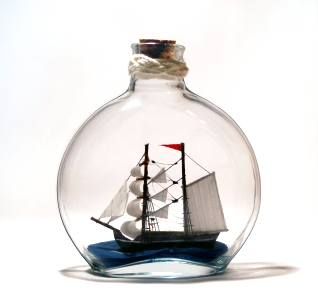 Thirty-three years. That’s how long we have had the dream to go cruising. “We” would be me and my husband Mike, who I met in a bar a week after I had signed up for sailing lessons. He liked the idea (and apparently me, too) and we ended up learning to sail together.

The dream began when we realized that daysails and weekend cruises to Catalina Island weren’t enough. We enjoyed being aboard the boats we chartered more than being home. So we began to plan. We got married (not essential but it made our moms happy), bought a boat six months later, and moved aboard to see if we could coexist in a small space without wanting to kill each other. She was not THE boat; we were going to work our way up to a 40+ footer for cruising. But meanwhile she was a step in the right direction and most importantly, the very difficult to obtain at the time 40-foot liveaboard slip she was in could be had with the purchase. A Cheoy Lee Robb 35 yawl built in 1965, we named her Because because we got tired of trying to explain to people (particularly my mother-in-law) why we were moving out of our spacious ocean-view condo into an already older and certainly not spacious boat. If you have to explain it they aren’t going to understand anyway.

We had a 10-year plan. In that time we would fix up the boat, sell her and buy something along the lines of a Peterson 44, continue to build up the cruising kitty and finally head south to Mexico. The itinerary from there was flexible. The main goal was to not “have to” come back. We’d seen that happen to a few others and it was a rough transition. We wanted to stay out cruising for as long as we were enjoying it.

Other than new rigging, Because was pretty much in her original condition when we bought her. At 16 years old that meant lots of things needing fixing or upgrading. Our education in boat maintenance began, and we found we got a lot of satisfaction from it. In between projects and continual coats of varnish (notice the amount of teak?) we tried to get in as much sailing and cruising locally as possible. We even snuck in a crossing to French Polynesia crewing for friends. All of this kept fueling our dream. Dreaming big is crucial and if you would like to sail in San Diego then you can check out Adventuress Luxury Catamaran, yacht rental and tours are available in this beautiful location before you set out on your adventure you will want to check out this place for inspiration.

And then, somewhere along the way, life got in the way of our plans. I should say, we let it. Some people manage to avoid this, but we didn’t. We fell right into the trap. Job opportunities came along that were too good to pass up. The cruising kitty wasn’t fat enough yet. THE boat never worked out, so we decided to make Because into THE boat. The list of projects took on monumental proportions at that point.

Although our 10-year plan has long since come and gone, we’re still living aboard and we still don’t want to kill each other (most of the time). We can see a light at the end of the tunnel. The project list is slowly growing shorter and most of the people who gave up on us ever leaving are starting to ask us “when?” We’re not saying yet. But we are making it happen and we will be out cruising for as long as we are enjoying it.

Thirty-three years. That’s a long time to keep a dream alive. So far, so good.