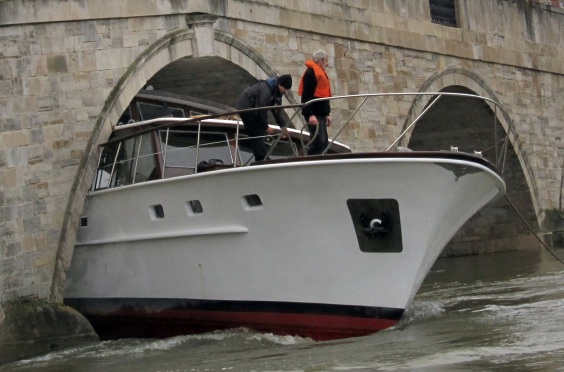 This once handsome Forty Foot Motorboat fell victim to very high river levels when it tried to negotiate Chertsey Bridge on the River Thames over the weekend.

It is understand that the boat was being cruised by its owner on Saturday afternoon 5th January, when it became stuck under the central span of the bridge.

Water levels were unusually high following the exceptional heavy rainfall in the UK over the past few weeks, resulting in the height between the underside of the arch in the bridge and the surface of the water being considerably reduced.

And despite ʻStrong Current Warningʼ signs being in place either side of the bridge, the undeterred the skipper attempted the impossible and unceremoniously wedged his craft under the archway, thereby adding his own touch of excitement to the Saturday afternoon shoppers.

The boat, described perhaps rather optimistically as a £500,000 yacht by the national press, managed to get itself well and truly jammed under this very busy and ancient bridge in just a matter of seconds.

Emergency services attended the scene after receiving reports of a boat becoming stuck fast and in danger of sinking with two persons aboard.

As a precautionary measure the two persons aboard were hoisted off by ropes after the road had been closed for safety reasons.

The bridge itself was closed to traffic during the incident, with local fire crews being called to the scene around 13:00hrs, the boat was eventually freed around 14:30hrs.

With the arrival of another boat from a nearby boatyard the cruiser was then towed clear and secured at a nearby marina. 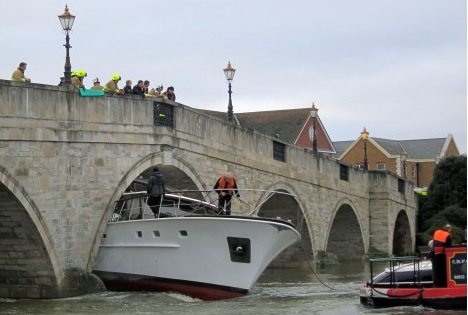 Much cheering and rejoicing from the less than sympathetic local community followed, whilst the erstwhile skipper looked for the hole in the ground that would kindly swallow him up.

A little superficial damage with a few scrapes and scratches was all that resulted and thankfully nobody was injured.

Pride however was another issue and is widely reported as having been seriously dented. I wonder if this embarrassing adventure will appear in one of those popular sailing magazine articles when they say, in hindsight…”what I did wrong was.” EVERYTHING

What Your Boat Wake Says About You

10 Tropical Drinks For Your Winter Blues