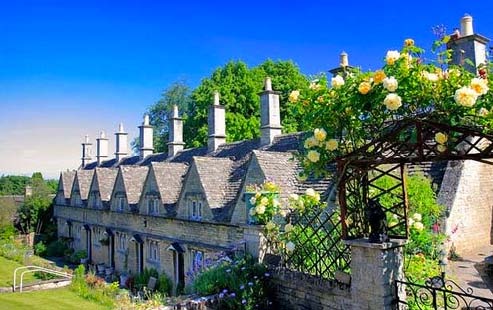 “Just like the tides of the sea, the tide of the soul is beyond our control as well.”

This has certainly proved to be the case for a group of well heeled people in the rather affluent and beautiful Oxfordshire market town of Chipping Norton.

Chipping Norton has always been popular among the hunting and shooting set in the area, but the idea of forming a yacht club without any water is at the least, rather bizarre and certainly could be described as unusual, even by normal quirky English standards.  Apparently, according to the founding members of Chipping Norton Yacht Club, it is being launched to give sailors a chance to socialise without the worry of having to travel to the coast and then being further troubled by tiresome issues such as mooring fees and unhelpful tides.  Undeterred by its landlocked position, keen sailing enthusiasts in the area are busily planning to create their own little piece of maritime heaven.  Trevor Taylor who is behind this scheme, explained; ‘”We’re on a hill so this is the last place you’d expect to find a yacht club – unless the polar ice caps melt and Chipping Norton’s market square becomes a harbour.” Not being absolutely certain whether this was said in some kind of jest, or if it had been factored into Taylorʼs long term planning… I will leave for the reader to decide.

Located in the heart of Middle England – and more than 100 miles from the sea this well-heeled (in the sense of opulent as opposed to the lee rail being underwater) and well-connected Cotswold town of Chipping Norton now looks certain to have its own yacht club.  The town is already home to the so-called famous ʻChipping Norton Set’ of political and media power brokers and reads like a list from ʻWhoʼs Who.

Organisers say there is a ‘surprisingly keen interest’ in the sport despite Chipping Norton being 107 miles by road from the south coast and they expect to launch the Chipping Norton Yacht Club early in 2013.  The club is hoping to affiliate itself to the Royal Yachting Association for events and training courses, which in itself should be interesting given the lack of boats and H2O.

It is to be aimed at holiday sailors as well as those more serious participants, so if your journeys take you anywhere near the Cotswolds any time soon, there’ll be a welcome mat out.  You can bet the stories around the bar will be wilder than ever, seeing they can’t be disproved.

The man at the helm of all these grandiose ideas is keen sailor Trevor Taylor, 66 who explained: ‘The idea came to me in Greece. We were in a marina chatting away and discovered the people in the boat moored next to us were from down the road.”

A place for boaters, without their boats

‘Lots of people in Chipping Norton have boats moored on the East and West coast, or like us in Greece, but were all saying there was nowhere for sailors to get together and meet. It came to me like a flash.” Asked whether any notable members of the Chipping Norton Set had come forward, he replied; “The Prime Minister hasn’t expressed an interest yet, I think he’s too busy trying to keep the economy afloat (sic) to spend time on boats, but we would be delighted to welcome him.” Of course notably one of his predecessors, Sir Edward Heath, was a very keen sailor so there’s no reason why he shouldn’t follow in his wake!’ However, to me at least it seems that waterside properties in the area will remain at a very high premium and still be rather hard to come by regardless of how much cash you have to splash around.  I also have it on good authority that West Marine has no immediate plans to open their next superstore in Chipping Norton anytime soon.  Final word as always goes to ʻTop Gearʼsʼ Jeremy Clarkson, when he describes his soon to be sailing friends in Chipping Norton as; “an incestuous collection of louche, affluent, power-hungry and amoral Londoners, located in and around the Prime Minister’s Oxfordshire constituency”…nothing new there then!

Fair winds to them anyway, perhaps we will see you in the Cotswolds.

(I understand there is a very good rail service)

Give The Gift of Cruising – FREE BOOK too!

The Curse Of The Traveler