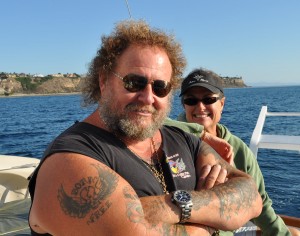 Here’s an email I got from Phil G. on Jan. 19, 2013, an old Lats & Atts reader, and it started me thinking, a lot of people can’t read my alleged mind, and don’t know why we do certain things in the new Cruising Outpost Magazine. So I figured it would be a good time to provide this for people who want to know.  Those who don’t want to know?  Well, they don’t have to read this trash!

“Hello- I have been a subscriber for a while and have a question.  What gives with using such a large typeface in the magazine?  Much less content for the number of pages compared to any other sailing (or other) magazine.  Will it become smaller i.e. a more normal size once the new mag gets off the ground?.”

Here was my quick response to him:

“Our previous magazine, Latitudes & Attitudes, and most others use a 10pt type with a 12pt leading (separation between lines.)  We had a lot of complaints about it being to hard to read.  With this new title we went up one size, to a 13pt (same type style) and a 14.4 leading.  Most people say they like it, some won’t.

What Was I Thinkin’?

Since people can’t read my mind, which is probably a good thing, here’s a little more clarity on “The Plans”.  What we need to clear up here is what I am trying to achieve with Cruising Outpost.  We try very hard not put any “magazine business stuff” in the magazine itself.  It is for boating fun, information and entertainment, not any actual thinking!  So I figure this would be as good a place as any to get it “out there.”

First of all you have to take into consideration the state of the economy, and how the publishing industry has changed over the past few years.  Newspapers and magazine are dropping faster than a new congressman’s moral values.  Having started in this silly business in the tabloid end 43 years ago (aaagh! Am I really that old?), with a small newspaper called Biker News in the early seventies, I have lived thru a lot of these changes.

When I lost Latitudes & Attitudes, I thought I was thru. Starting a new publication in this topsy-turvy world was the last thing on my mind.  But then our readers gathered to help us re-start, so I wanted to design a magazine not only I would want to read, but one that every cruiser would like to read.  That’s a very tall order.

So the very first thing I decided was it would be different from all other magazines.  Now when you are fighting companies that own thousands of magazines, it’s hard to be original.  But something I learned a long time ago is, great magazines are always started by enthusiasts which is what makes them popular, and then they are bought by the big companies, who usually ruin them.  So all I had to do was look at what changes take place once these titles are sold.  That was fairly easy for me, as I have created a few titles in my younger days that were successful, and sold them (so I could sail off into the sunset).

The first big change is always advertising ratio’s.  In my magazines I always put editorial before advertising when it came to space.  I could do that, because when I own a magazine I usually run it lean, so we don’t need a lot of profit to be happy.  Large companies need large payrolls, and need more $$$. What all this excess verbiage means is, they have to have more paying advertising space.  You will usually find about 70% ads to about 30% editorial, or actual stories/information once a magazine sells. If you don’t believe me, take a close look at Sail, Cruising World, Yachting or any other boating magazine.  It’s not the editors fault, ratios are set by the big corporations.

So I decided to try something new. I thought I’d try something that has never been done, to my knowledge.  A hell of a time in life to take risks, but what the hell.  I get Social security, so if it fails Jody & I can move onto a 1973 Catalina 22 and “Retire” to Mexico!  So I designed a reader-supported magazine instead of advertiser supported.  Unheard of in any corporate office, I can assure you.

The first thing we did was look at the economy, and realized that marine advertisers don’t have the ad dollars they had pre-2007.  Back then they could spend $12,000 for a page in Cruising World or $20,000 for a two page spread in Sail Magazine.  Today the money is just not there.  Now they are lucky to be able to buy an ad every three-four months.  So I decided we would do a quarterly.  That way at least we could get some advertising.

Part two of this equation was to make the ads affordable.  When I was cruising I started a small nautical jewelry company, Nautical Gold Creations.  I would buy a 1/8 page black & white ad in Sail, Cruising World and Yachting, for about $1,800 in each issue.  It hurt!  But if I sold at least two expensive bracelets I would break even.  So I was working to pay for the ads.  When I started Latitudes & Attitudes, as well as in the new Cruising Outpost, I made all ads four-color.  It doesn’t cost us any more, so why charge more for color?  And then I made it affordable.  $375 for a 1/8 page ad.  Why should we be greedy. That came to $3,000 a page, which is more than we charge for a full page by a long shot.  Good for us, good for them.

What happened, as an unforeseen side benefit was the really small companies could afford to advertise with us.  Since they could have an ad in every issue, they could sell stuff in every issue, and soon companies that started with 1/8 page ads ended up with half-page ads, then full page ads.  They could do it, because our full-page rate is just $1,800! It’s affordable for the small company.

But we had to give the reader value for their buck (or in this case almost 7 bucks!) and to do that we had to give them plenty to read.  It was then I decided to reverse the rolls that advertising and readers have.  Back in “The Day,” magazines would all but give magazines away to get their numbers up so 5th Avenue Ad Agencies would place big-buck ads with them.  Boating magazines had it made!  Look at the demographics. Tens of thousands of readers with $250,000 and up incomes were the norm.  Cadillac, Rolex, and even high-dollar waterfront real estate brokers all wanted in.   However, I always got a little pissed off that my magazine I bought at the newsstand with my hard earned cash, so I could enjoy reading about the boating lifestyle, had big ads for fancy houses, expensive cars, and un-affordable watches. All I really wanted to read about was boating!  I felt cheated.

And so, with the launch of Cruising Outpost, I finally created what I feel is the perfect compromise.  I like advertising in my magazine!  It shows me what new marine goodies and new design boats are being made.  I want to see that stuff.  And so, I decided we would stay with only marine advertising.

The end result seems to be working so far.  With 4-5 times the stories and information in every issue compared to other magazines, the value seems to be there.  By maintaining only marine advertising no one seems to be complaining.  In fact, so far the only complaints have been that we don’t come out often enough.  But quite frankly, the only way we can maintain this ratio is by being a quarterly.

And besides, with such a small staff, most of whom live & work from their boats, we just don’t want to work that hard!

The Next “Inside Cruising Outpost,” articles subject?  Just wait and see…..