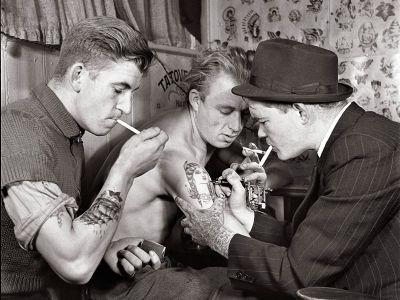 The rich history of sailors and tattoos stretches across many years and countries. Denmark is no exception. Below is an excerpt from part one of a two part article written by Justin Cremer and posted on The Copenhagen Post.

The old cliché about tattoos and sailors is waterproof,” said Nordstrøm. “It was all inspired by sailors who would come from the States and other places. The sailors really started it.”

At the turn of the 20th century, Nyhavn was the only place in all of Denmark – indeed in all of Scandinavia – where those inclined could get tattooed. It was a distinction the area held for nearly a century.

“Denmark, and Nyhavn in particular, was the headquarters for tattooing in Scandinavia for nearly 100 years, from the 1890s to 1975,” said Nordstrøm. “Aside from a few ‘sailor shops’ that popped up in Sweden in the ’40s, where tattoos were done in a backroom, there was no tattooing in Sweden or Norway.”

The first to establish a ‘real’ tattoo shop in Nyhavn was Hans J Hansen – better known as Tusch-Hans, or Ink-Hans in English – who, inspired by getting his first tattoo before shipping off to sea as a 17-year-old sailor, taught himself how to tattoo on the drunks at his mother’s Copenhagen bar. Shortly thereafter, Ink Hans approached the owner of the basement bar at Nyhavn 17 and asked if he could tattoo there. Granted permission, he placed a hand-drawn cardboard sign in the window and set to work.

Particularly interesting is the special deal a tattoo artist had with women who wanted a less permanent memory of a sailor friend.

A Brief History of The Pleasure Boat Anchor