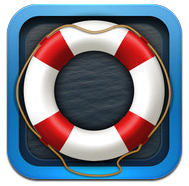 Manoverboard is an App that could save a life.

Anyone who goes to sea or on the water should have this App. Its good for practicing MOB techniques as well
as in a real emergency.

Simple to use, Manoverboard shows you the way back to the MOB – and the position to give to the emergency services. That alone could be life saving. If you are in any type of boat – yacht, motorboat, dinghy, anything that floats – your safety and that of your crew and guests is paramount. Don’t just download this App yourself – make sure that they do to. It may be you that goes overboard!

It’s designed for anyone to use. It could not be simpler.

Press the Info button to see:

A man overboard situation is fairly rare but it happens more often than you think. A simple trip on some deck clutter; a knock from the boom; leaning back on a lifeline that snaps; reaching over to retrieve a fender– there’s a hundred ways for someone aboard to unexpectedly find themselves in the water.

GO TO THE APP ON ITUNES