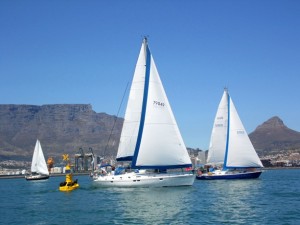 The current rally fleet left Cape Town on Saturday 5 January, bound for Brazil via the mid-Atlantic island of Saint Helena, the final ocean leg of their round the world odyssey. The crews, representing 14 different nationalities are taking part in the World ARC sailing rally which left Saint Lucia, in the Caribbean, in January 2012 and will return there in April this year. During this 15 month east to west circumnavigation the crews have transited the Panama Canal and crossed the Pacific and Indian oceans, visiting such wonderful places as the Galapagos Islands, Tahiti, Tonga, Fiji, Vanuatu, Australia, Bali, Mauritius and La Reunion.

Around 90 crew members currently involved in the Rally have spent the last 2 months exploring South Africa since they arrived in Richards Bay in early November. During their stopover in Cape Town, the fleet of yachts have been berthed at the Royal Cape Yacht Club and the V&A Waterfront. Many spent the festive season on board with additional friends and family flying in to visit them to welcome the New Year.

Paul Tetlow, Event Manager for the World ARC commented “The crews have had a fantastic time in South Africa, and in particular Cape Town. It’s a particularly festive period to spend time in the city, which enhances the pleasure of staying here even more. We are very grateful to our hosts for supporting this event”.

Unfortunately, at less than 10 knots, the wind conditions for the start did not provide a very exhilarating start for 2013, but there was still something special about seeing the fleet departing Table Bay and the impressive Table Mountain overlooking the starting area. The forecast promises some classic trade wind conditions to the remote island of Saint Helena and the fleet are expected to arrive after 8-9 days at sea having covered 1700NM. From there, the yachts will continue across the South Atlantic to Salvador de Bahia in Brazil, hoping to arrive for the city’s annual carnival beginning on 8th February. Their progress can be followed online via the Fleet Tracker.

To date, 42 yachts have signed up for the next edition of the World ARC which starts in January 2014, from Saint Lucia.  From 2014 onwards, the rally will become an annual event, with a start in Saint Lucia every January and Australia every August.  This means that boats can sail a half rally, take time out to cruise further, and then re-join the next edition of the rally.

Following the classic trade wind route, the World ARC itinerary offers a mix of cruising in company and free time to explore, attracting a wide range of sailing adventurers to share the experience of a lifetime. Yachts entered for 2014 represent 14 different nationalities and so far the fleet ranges from Dehler 39 SQ, Dinghy from Germany to British-flagged Amel 64 Tulasi. The typical World ARC boat is around 15m (49 feet) long, and multihulls comprise 12% of the fleet.  There is no age limit on participation and several boats will be sailing as families with young children aboard.

Entries open for the World ARC 2015

Entries for the 2015 rally will open during January and anyone interested in joining the adventure of a lifetime can request an information pack via the World Cruising Club
website.

Outposter’s Pictures Are The Reason We Wake Up (20 Pictures)

Two incidents of armed piracy against sailing vessels reported in the...