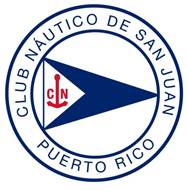 San Juan, Puerto Rico. Breeze blowing 10- and 15-knots created keen competition for the 102 boats and over 140 sailors from 7 islands that competed in the first day of racing in the 12th Club Nautico de San Juan International Regatta (CNSJIR). The Race Committee reveled in the ideal conditions and launched as many as four and five races in some of the eight classes.

“We are happy to have broken the 100 boat participation mark for two years in a row now,” says Gustavo Hermida, Commodore of Club Nautico de San Juan (CNSJ). “The competition has been excellent today and we’re expecting even better weather for the next two days.”
The Optimist dinghy represent the largest one-design boat of the regatta with 60 boats total, 23 in the beginner Green Fleet and 37 in the Advanced Fleets.

In the Advanced Optimist Fleets, the BVI’s Sam Morrell has a commanding 9-point lead in the 13- to 15-year-old Red Fleet. Antigua’s Rocco Falcone and St. Thomas, USVI’s Teddy Nicolosi are tied in the age 11- and 12-year-old Blue Fleet.

“Teddy was one of my main competitors today,” explains St. Thomas’ Jack Findley. “He’s hard to figure out because he does something different all the time.”

Findley enjoyed racing his second year at the CNSJIR.

“Last year it was a lot windier,” says 11-year-old Findley. “This year the winds are a bit lighter. I do best in light air.”

Lasers are the second largest one-design after Optimists. Puerto Rico’s Pedro Fernandez leads the Laser Radial class, while the BVI’s Matthew Oliver sits at the top of the Laser 4.7 class.

“There’s lots of action and good competition,” says St. Maarten’s Bodine Beentjes, who is currently fourth in Laser 4.7s and raced this event in Optimists last year. “My closest competition is Mollee Donovan from the BVI. The top three places have really varied throughout the day and that makes it exciting.”

Puerto Rico’s Gregg Fyffe has so far successfully defended his title in the Sunfish Class.

This year’s addition of a CSA Spinnaker Class has both enlarged and strengthened the regatta’s fleet. Competition is so close that only 2 points separate the top four boats. Puerto Rico’s Jaime Torres driving his new Melges 32, Smile and Wave, is in first with 5 points, Julio Reguero’s J/105 Umakua second with 5.5 points, Kike Gonzales’ Olson 30 Kosa Loka third with 6 points and Sergio Sagramoso’s J/105, Lazy Dog at 7 points.“Nine boats for the first year in this class is great,” says Torres. “Some in our class haven’t been out to sail in two years – until now. We are trying to rebuild the CSA fleet in Puerto Rico and this certainly looks like we are reaching our goals.”The racing continues Saturday and concludes Sunday.Live results are available at: www.regattanetwork.com/clubmgmt/applet_regatta_results.php?regatta_id=4088The CNSJIR is an outgrowth of the Club’s junior sailing program, which was launched in the 1970s by Andres Nevares and strengthened in the late 1990s by then-Commodore Richard Christiansen and Ricky Adsuar. The program, which is now directed by Berríos since 1998, combines technical knowledge with practical hands-on sailing experience. It’s a combination that definitely works. For example, the Puerto Rican sailors who won fleet and team racing awards at the 2008 Optimist World Championships were graduates of the program as were six of the island’s sailors who won five gold and one bronze medal sailing at the 2010 Central American and Caribbean Games inMayagüez.Visit:www.nauticodesanjuan.com/sailingprogram/regatta_int.htm

The Curse Of The Traveler