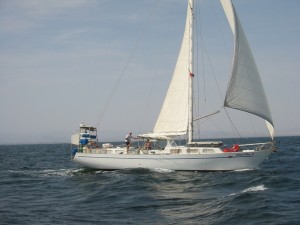 Never in our wildest dreams did we imagine we would sail all the way ‘round the wondrous world when we set out from Vancouver aboard Hoki Mai in 1985.

Never in our wildest dreams did we imagine that over the next four and a half years we would meander through the South Sea islands to Australia, and then carry on to Papua New Guinea, Buka in the Solomon Islands, Guam, Saipan and then Japan, where we would remain for another four and a half years, working and teaching, and then sell Hoki Mai.

It is what happened though. Twenty-seven years ago we set sail from Vancouver, wide-eyed 30 somethings, with a limited budget, the boat not even paid off but with enough funds for a one-and-a-half-year sailing adventure in our pockets, we thought, not really knowing what was in store. Then, we would have thought it a miracle to sail around the world. Now, it seems that it was preordained.

Before arriving in Sydney, Australia, we had our worst weather in all of our years of sailing: 65 knots of wind for 36 hours, hove to, in survival mode, in the Tasman Sea. That first passage across the Pacific was a good “shakedown” for marriage we figured. So we tied the knot. We celebrated our 24th anniversary in Puerto Vallarta, having “tied the knot” on the circumnavigation a couple of weeks earlier, in Manzanillo, aboard Feel Free.

The evolution of that circumnavigation is just that, an evolution. After selling Hoki Mai in Japan to Kenji Yoshikawa (a scientist, who bought her for his Arctic expedition, to study permafrost), and returning to Canada, we felt homeless and lost without a boat. Feel Free was the solution and aboard her we set out across the blue Pacific again via Hawaii and Micronesia this time, back to Australia, and continued on from there to circle the entire globe. 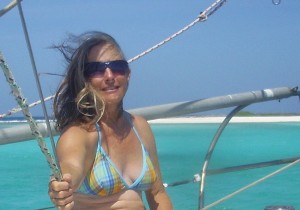 What started it all? Well, I always loved boating and travel has always been a great fascination, addiction even. I remember clearly, as early as 5th grade, studying the explorers of exotic lands in ancient times, and longing to be one myself one day. But how could I? I decided to become a missionary nun. That way, I could see Africa, India and other alluring locations The idea of converting natives to Christianity didn’t appeal though, so that idea fell by the wayside.

I spent early summers with my large family (parents, grandparents, five sisters and one brother) at the lake, swimming for hours on end, collecting frogs, going fishing with Dad, learning how to put a worm on a hook, how to tie knots at Girl Guides: all these small steps must have contributed in some way to my desire to head off for distant horizons.

My first real job after University, flight attendant, gave glimpses of foreign lands, but that work wasn’t for me either. I went back to school and became a teacher; also got into the publishing business, but sailing didn’t enter the picture until in Vancouver, I met Tom, soul mate, ship mate, life mate, love of my life. Then, the world took a different form entirely.

Writers like Chichester, Slocum, the Hiscocks and the Griffiths had been incredibly influential on Tom’s young mind, but it was Joshua Slocum’s description of his passage from South Africa to the Caribbean when he didn’t touch the sails, that etched indelibly in Tom’s memory. He turned me on to these characters and their stories too. 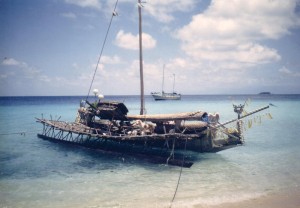 It was a natural. We were of the same cloth. The plan soon started to take shape. We’d both spent several years in the corporate world in Canada, years of competition and conformity. Were the expectations placed on us too stressful? Were we looking for an out, wanting to shirk responsibility? Did the romantic notion of sailing off into the sunset offer a convenient escape? Who knows, least of all us!

Whatever the case may be, when the decision to leave was announced in 1985, Tom’s colleagues at 3M and mine at Prentice Hall congratulated us for having the courage to quit and go. Whoa… both companies even promised us jobs upon our return in a year and a half. No denying it, we were a very lucky pair early in the game.

Heading down the West Coast during that first year, we were fortunate, no, privileged, to meet a pair of veteran cruisers and circumnavigators in Morro Bay, California. John and Mary Lavery of the Hawaii based steel ketch Si Ti Si, had been cruising since 1958 when we met them, must have been around 70 at the time, and were founding members of the Seven Seas Cruising Association. They passed on to us very some sage advice.

First, “If you plan to sail around the world, don’t rush. After it’s completed your friends and relatives will be genuflecting, if they do at all, for only a very short period.” In fact, we’ve yet to witness our first genuflection. It’s a common refrain among cruisers that people back home pay remarkably little attention to your travels. Some pay lip service, but for the most part they are tuned into their own movie and have little time for your sailing exploits, as remarkably fascinating as they are to you.

If you would like to read the full story you can order Issue 1 online:
print edition or online version.  Article starts on page 85.