Have you ever noticed the strangest things happen to you, when you are least expecting them?

First of all, I should explain that I am fortunate enough to live in and be part of one of the busiest sailing areas in the world, Cowes on the Isle of Wight in the UK. So it is not particularly unusual when strolling around the town, (in fact it’s not much more than a village really) to meet, or at least see the occasional personality out and about.

Dame Ellen Macarthur lives in the new block of apartments next to my office, Sir Robin Knox Johnston is often seen during the summer months, Sir Chay Blyth was here 10 days ago brushing up on his astro-navigation with my partner Stokey Woodall, the occasional TV and Movie actor visit Cowes quite often and so on… no need for anymore name dropping… you get the picture. 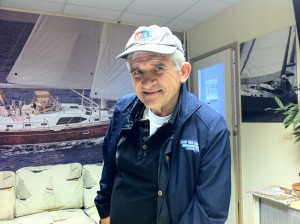 So I barely raised my eyes from the computer screen one day last week, when a smallish guy walked into the office and quietly asked if we had any boats for sale…well yeah! That’s what we do, or at least try to do!

He told me his name was Keith White and that he was loo king for a boat to sail around the world in. So far so good, except without being rude to anyone, if I had a dollar for every time someone has said that to me over the years, I would, shall we say be reasonably rich.

He then continued, that he is planning to sail around the world non-stop and single-handed. This was the point in the conversation when two things happened and matters changed.

First, he slowly moved his right hand across to his left arm and flicked it with his fingers, the left arm just flopped around and I could see instantly that he had no use in it at all. Second, I suddenly realized he really did mean single handed in it’s purest and unkindest form.

He now had my full and undivided attention; I wanted to hear his story.

He began by telling me that he had not always been disabled. He had unfortunately been riding his motorcycle on the M1 motorway (Interstate) heading north out of London when a huge truck suddenly swerved and knocked him off his bike, crushing him against the road side barrier. He was very seriously injured and underwent several operations, followed by weeks and weeks of physiotherapy, before being finally allowed out of hospital many months later. He was now a disabled person and would remain so for the rest of his life, he had to come to terms with it.

Keith had always been a very keen sailor before his accident, he now made what was to become a life changing decision at this point. That he would try to continue his sailing with only the use of one arm and that furthermore, he would set himself three progressive challenges whilst attempting to do so.

The first of which, was to become the first disabled sailor ever to sail around the British Isles, the “wrong way around” against the prevailing winds. He eventually accomplished this in some style, but not with causing a certain amount of controversy within the dusty corridors of the Guinness Book of Records organization.

Keith left Gillingham harbour on June 8 2005 sailing out into the Thames Estuary, before turning left and heading North up the East coast of the UK. All was going well as he sailed the rough seas across the top of Scotland and then down the beautiful West Coast of Scotland. However, he very quickly ran into serious trouble off the coast of Ireland, when he was caught in freakish 70 mph winds and a storm force 11 in the very early hours of the morning of July 3rd 2005.

He was out in the Atlantic Ocean between the Outer Hebrides and the coast of Northern Ireland (at approximately Lat 55° 43 N, Long 09° 4 W) and some 8 hours sailing time from land, not the best place in the world to be, alone and in a storm.

His little 32 Beneteau First named Nephele battled manfully on in what were now huge seas, but was eventually overpowered. Keith was thrown across the boat at some point and became incapacitated before finally calling for assistance on the VHF. The RNLI, Coast Guard, two Helicopters and a Nimrod search aircraft took 18 hours to find him in his little boat. One can only image the pain and discomfort he endured during this period.

Undeterred by this alarming experience and following only two days in hospital with three broken ribs and still in great pain, this exceptionally determined character amazingly set sail again and on July 22, finally completed his 2,000 mile journey back to GillinghamHarbour on the east coast.

What happened next was unusual to say the least.

Keith tried to contact the Guinness Book of Records to report his achievements and following several unanswered emails, they eventually replied, saying that, whilst they agreed it had never been done before, or even attempted by a handicapped person before, they felt it was a bit too complicated to become a record as such.

Undaunted by this rejection our little terrier of a friend, continued with his endeavours, finally raising over $12,000 for charity, giving a large percentage of that to the RNLI rescue service. Once fully recovered he went back to Ireland, taking presents for every member of the crews that had been involved in rescuing him. To the extent of even arranging a party for them all and putting $750 of his own money behind the bar to get things off to a good start.

Most of us would probably agree, that by this time Keith had earned the right to put his feet up, relax and be content with his achievements.

But no, he swiftly moved on to his second challenge…this time he was going to conquer the Atlantic, by sailing the complete Atlantic circuit from the UK to America and back again singlehanded.

During late 2006 Keith purchased a brand new Bavaria 40 and began preparations to fit the boat out for his latest challenge. There were no great surprises as far as I could see, with the detailed list he showed me of all the equipment he had added, until I saw what he described as “Special Disability Adaptations”, which in real terms meant; In order to climb the mast safely, Keith had decided to fit extra steps on the mast running from top to bottom and he also fitted a sliding channel running the full length of the mast. Keith could, he felt, be sure footed at any point on the mast, as one end of a safety line would be fixed into the sliding channel and the other end fixed to his harness. The safety line also went to a winch that could be operated via a remote hand held device. If Keith was ever blown or slipped off the mast, he could (nearly always) be sure that he would avoid injury and perhaps recover himself via the safety line and winch.

My eyes watered when I read this, the thoughts of a one armed man, no bigger than an over-sized Jack Russell climbing the mast of a 40′ sailboat in any kind of heavy weather, was too hard to imagine. I shook his hand (the good one) and he continued with his story.

Throughout 2007 and 2008 the Atlantic crossings went without any really serious concerns, although he did have quite a few major issues with the boat itself. These he managed to rectify himself whilst underway, getting little if any kind of support from the builders. Once again he raised considerable amounts of money for charity by his achievements.

Two challenges met and one to go.

So here we are today, Keith is still brim full of quietly determined optimism, as he starts to prepare for his third and final challenge. Which is, as I mentioned at the beginning, to sail around the world in 2015, non-stop, single-handed to raise money for charity 100% of which is given to his chosen causes. He will become the first disabled person ever to do so.

He carries all the expense of the yacht purchase, preparation and the passage out of his own pocket. He has sold his house in London and purchased a smaller one in Cowes, to enable him to finance the trip. He is doing it because he wants to and because it is his way of helping people he believes are less fortunate than he is.

Since my introduction to this very sincere man, I have grown to like and admire him and his values to the point where I feel as though I want be part of his dream and help him in any way I can.

So far I have spent several hours on-line trying to find a boat that fits his budget, which is quite low. As yet we havenʼt come up with anything suitable, but somehow, I just know that if we keep going, we will find something and that in 2015 he will set off around the world and he will achieve his dream.

Keith is a man who doesn’t view things such as, being crippled in a car crash, or rescued from the Irish sea, or rejected by the Guinness Book of Records, or un-helpful boat builders, as anything other than every day irritations. He just moves forward with his plans and his steely determination to fulfil his destiny.

He left Cowes a couple of days ago, to go back to London to finalize the house sale. He will be back next week and I for one am looking forward to his return and continuing our joint search for his next boat.

Physically Keith is a very small man, rarely if ever gaining even a second glance from passersby, but in my eyes at least, he really does walk tall around Cowes…

Like I say, you never know who is going to pop their head around the door next.

Till the next time,