By: Brian Schmitz
Schmitz spent four years cruising the Caribbean, Central and South America as well as the Atlantic coast off the U.S. with his wife in a 43-foot Mason. 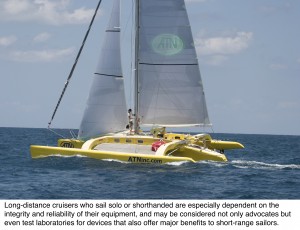 There are numerous apparatuses and accessories that can make sailing more pleasurable or convenient, but relatively few that can make major differences in efficiency and safety without substantial changes to rigging. Still fewer are available to facilitate significant safety or performance improvements for those who sail shorthanded or even solo, whether an occasional yachtsman, weekender, or serious blue water cruiser.

Long-distance cruisers who sail solo or shorthanded are especially dependent on the integrity and reliability of their equipment, and may be considered not only advocates but even test laboratories for devices that also offer major benefits to short-range sailors.

For example, Henri Rossolin is a long-distance cruiser who has sailed the waters of France, South America, French Polynesia, Alaska and along the Pacific and Atlantic coasts. A retired commander in the French navy, Henri sometimes cruises solo, but prefers to sail with his wife. Being shorthanded has posed some problems, but like other bluewater veterans he has learned a few tricks that make cruising safer and more enjoyable, without spending a lot of extra money.

One of Henri’s favorite shorthand solutions involves hoisting and hauling in the spinnaker, and this solution applies to many occasional yachtsmen or weekenders as well.

While the spinnaker is a very useful sail, especially in light winds. In typical racing situations a spinnaker might be brought in a dozen times, depending on the legs of the race. Long-range cruisers tend to hoist and retrieve the spinnaker less often on average and always hesitate to hoist it with minimum crew.

Yet, many shorthanded sailors, especially cruising couples, may be reluctant to use a spinnaker because of the difficulty in rigging and hoisting it, then bringing it down and hauling it in. If higher winds suddenly come up, there is the risk of tearing the sail or getting it caught in rigging. Roller-furlers are expensive, do not work well with spinnakers, and even if one is used, the rolled spinnaker must not be left up as other sturdier foresails can. Also, hauling in a spinnaker on a roller-furler is somewhat hazardous in higher winds. As a result, in light winds many spinnaker-shy cruisers end up trading the peace and comfort of spinnaker sailing off the wind for the noise and odors of motorsailing for hours or even days on end. 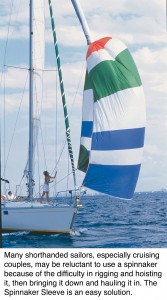 The spinnaker handling solution that Henri Rossolin found has been discovered by thousands of other boat owners of all classes – the Spinnaker Sleeve. This is a highly efficient and relatively inexpensive device that is used to hoist and release the spinnaker, then later drop and haul in the sail with minimal effort. Available is a broad range of sizes, this innovative spinnaker handling system eliminates the shortcomings of furlers, and makes it easy for anyone to hoist and lower even large spinnaker sails singlehanded.

Developed by Etienne Giroire, a highly experienced French-American racing yachtsman, the Spinnaker Sleeve was an affordable solution that worked much better than the rigging and furling systems that began coming onto the market in the 1980s.

“I remember checking the spinnaker sleeves of the competitors of the 85/86 BOC (single handed race around the world in 4 legs) in Newport and thinking that the sailmakers could use some help to design and manufacture a good, safe, working spinnaker handling device. We gave it the effort and creativity, and that was the beginning of the Spinnaker Sleeve, which is now a proprietary product of ATN (American Technic Navigation),” Giroire explains.

Henri Rossolin has used a Spinnaker Sleeve on his French-built 50-foot aluminum world cruiser for several years. He has tried a couple of different sleeve designs, but says the ATN model is the one that works best.

“The Spinnaker Sleeve works consistently well,” Rossolin says. “I found myself using the spinnaker much more frequently because it is so easy to haul down the sail. The spinnaker is usually flying and batting in the wind, and as you haul it in you don’t know where it might travel; sometimes it goes underneath the bow. With the Spinnaker Sleeve you simply have to pull down on the sleeve with its own halyard. The sleeve has an oval shape at the bottom, and so it gathers the sail in perfectly.”

Another accessory item that can make using the spinnaker easier and safer is the Tacker, an attachment device that is shackled to the spinnaker’s tack.

The Tacker is an inexpensive tool that allows a spinnaker to be flown without a pole. This device is used to easily and effectively control the tack of the cruising spinnaker by fastening it over the furled headsail.

“The Tacker is very useful when you have an asymmetric sail,” says Rossolin. “And it is very easy to use. It is especially helpful when you are not running downwind, when the wind is half or three quarters.”

Yet another relatively low-cost device can provide vital safety to any sailor who runs into stormy weather conditions. The Gale Sail is a storm jib that eliminates the dangerous job of unfurling, dropping and stowing away the furled working sail to free up the roller-furler in windy conditions to hoist the conventional jib.

“The reason for choosing the Gale Sail is that during storm conditions you want to deploy the smallest possible sail,” advises Tim Kent of Mack Sails (Stuart FL), the biggest small sailmaker in the U.S.

“One of the nice things about having a Gale Sail is that you can point or, if you need to, heave-to, which is extremely important in storm conditions,” says Kent. “This sail is very robust, built strong enough to hold through storm conditions. The sail’s luff pouch is a bright orange color, so it can be easily spotted by other boats in the water. So, it is the perfect sail to be used when conditions warrant.” 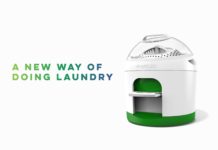 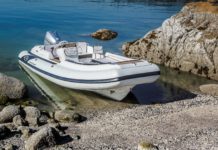 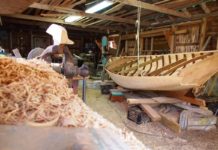 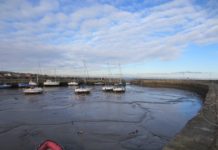 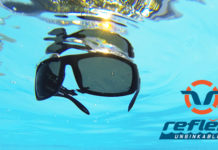 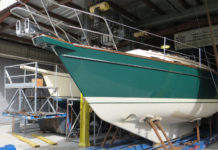 A Bridge Too Small