It’s kinda hard for me to believe, but I have been writing trash like this for 40 years.  In that time I have probably pissed off more people than the average writer.  It’s not that I try to do it, but I think the reality of it is, I hate writing pablum.

Pablum is what most major magazines publish.  Here’s an idea of what I am talking about. Once a story is accepted by a “major” magazine, it is scrutinized by the editor.  That’s a good thing, as it gets rid of a lot of the excess verbiage and spelling errors (of which I have many!). But then it goes to their legal department.  This is where lawyers look it over to make sure no one can sue them for what is said.  This starts the homogenization process. It then goes before the managing editor.  Here is where most of my articles went straight into the trashcan.  You see, it is their job to make sure nothing is said that might go against any of their reader’s ideals, thoughts or religious upbringing.

I guess you probably know, as you read the trash I am writing here, that I pretty much tell it the way I feel about it.  How can you bring the passion into someone if your words are homogenized and made to be non-offensive to every body?  In order to stir passion you need to be passionate yourself.  I could no more write an article about ladies tennis than I could eat a Volkswagen (although there are those who think I could do THAT!).

No, in order for me to enjoy what I write, I need to say what is on my mind!  Oh, I don’t mean to go out and be offensive for the pleasure of being offensive.  No, I leave that to the Shock-Jocks out there.

What I am talking about is to sit down and tell the innermost truth on how I felt at a given time while doing something that my readers might have experienced, or might want to.  You know, what does it feel like to get hit by an 80-foot rogue wave? Try to write about that without at least one “Oh Shit!”

The reason I am writing this is because of an email I got yesterday.  It was from an old reader of Lats & Atts who didn’t have any idea what happened to me and Jody.  He got the email blast that I sent out about trying to get funding to buy back the Lost Soul so we could put it into charter. He basically called me a “con-man” for trying to get other people to buy my boat for me. I am sure you can guess what my first instinct was, but I didn’t write back and try to justify things.  I did send him a link to an un-biased news story about what had happened.  But it hurt.  It hurt a lot.

The original idea was not mine.  It was actually from a bunch of my readers, who, when they found out we had lost everything and gone bankrupt suggested there might be a way to get the boat back out there, where they could use it and sail on it as well.  I balked at it, but sent an email to a bunch of our Founder’s Circle Members asking what they thought.  Over 97% said to do it, and I figured what could it hurt?  So a couple of months later, after working with my lawyer and finding a way to do it where no one would have any liability except for me and Jody, we launched SV Lost Soul.com to try and raise the funds.

But no matter the reason behind it, there are probably a whole lot of people out there who will think the worst of me.  I know I will be at a boat show, or at one of our events, and someone will walk up and say something, and I just have to learn to live with it. The guy who brought me into this business, Larry Kumferman, was the first one who set me straight.  He said, “Don’t believe your own hype.” He went on to explain how people who work for magazines and on TV will be able to please some of the people some of the time, but NEVER be able to please all of the people all of the time.

And he went on to explain how homogenized most media is.  He made me promise that if I ever started to think about if something I say will offend someone, to let him know, so he could stop using my articles.

That is not to say I ever go out of my way to offend people.  But when I feel passionate about something, that passion is what my real readers are looking for.  Not some double dipped piece of tripe that lawyers and a group of people have purged of all feeling.

Okay, here’s what I mean.  When I was cruising and “semi-retired” (I think that means you aren’t holding a job, but don’t particularly give a damn) I was still writing.  Not for any particular reason other than the fact that I enjoy writing.  For me it’s an escape.  When I write a novel I get to live the whole thing.  How kewl is that?  The three novels I’ve written were all written while I was “off work.”  The first, “A Brotherhood of Outlaws” was actually started as a “think piece” for Penthouse.  I’d just finished helping organize a national Biker’s Rights event, and they asked for a story on it.  I agreed (hey, they paid BIG BUCKS!). 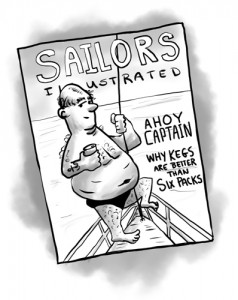 But try though I may, I could not keep from embellishing it.  I wanted the lead character to be stronger, better looking, and of course a lot braver.  Oh, and I wanted him to get laid a lot more than I actually did.  And I wanted him to fall in love.  Back then I did fall in love, but I seemed to do it every week or so.  I longed for a more secure romance, at the same time cracking skulls and riding Harley’s all over the country. I got to live the whole adventure as I wrote it.

But I digress.  Unfortunately, much of this foofaraw did not coincide with the truth.  The truth made kind of a dull story.

When we were doing Latitudes & Attitudes I used to get a few ladies (and I use that term lightly!) at boat shows who would walk up and say, “Why do you have to have a young hot girl in a bikini on your covers?”

My immediate response would be, “Why would I want to put an ugly, tattooed fat man on the cover!”

At this point they would usually walk away after giving me their best “harrumph!”

I went back and looked.  Of the 164 issues of Latitudes & Attitudes magazines that I had the honor to produce, only about 1/3 had young ladies in bathing suits on the cover.  Not that that has anything to do with it, but it was a fact.

But the thing I am trying to point out here is this. Latitudes & Attitudes was not the biggest selling Boating Lifestyle Magazine (except at West Marine!). But it’s readers were the most loyal.  The same thing is happening with Cruising Outpost.  People who like it, love it. People who don’t, don’t.

I want to tell people what it’s like on a dog-watch, when the moon is out, and you are crossing an ocean, and a pod of dolphins come up beside you and snort hello at you.  For people who don’t understand, there is no explanation.  For those of us who do understand, none is needed.