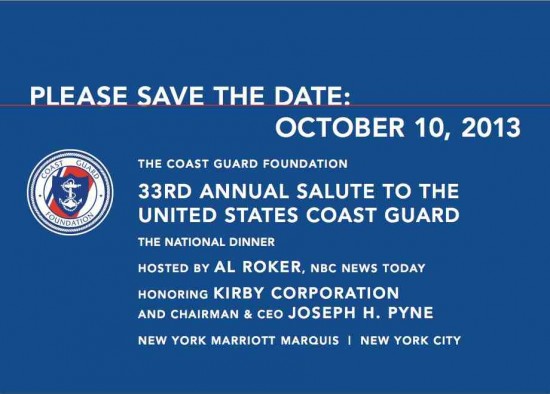 Stonington, Conn. – The Coast Guard Foundation, a non-profit organization committed to the education and welfare of Coast Guard members and their families, announced today that its 33rd annual Salute to the United States Coast Guard will take place on Thursday, October 10, 2013 in New York City. This year’s event will honor the bravery and heroism of U.S. Coast Guard members across the country and pay special tribute to Joseph Pyne of Kirby Corporation for his strong support of the Foundation, and its programs and projects that benefit the Coast Guard and its service members. Al Roker, who emceed last year’s Salute to the Coast Guard in New York, will once again serve as the evening’s master of ceremonies at this year’s event.

Al Roker, the thirteen-time EMMY Award winning host and weatherman of NBC’s TODAY Show and The Weather Channel’s “Wake Up with Al” is a natural fit for the Coast Guard Foundation event. As the CEO of Al Roker Entertainment, Mr. Roker produces several popular Weather Channel series that feature the Coast Guard (Coast Guard Alaska, Coast Guard Florida and an upcoming series in the Pacific Northwest).

“This tribute to the professionalism and bravery of the men and women of the Coast Guard is one of our longest standing traditions,” said Anne Brengle, president, Coast Guard Foundation. “We’re very excited to have Al Roker host this event again. He brought humor, passion and true appreciation for the service of our Coast Guard members. We are delighted to have him return to the stage once again this year.”

Joseph Pyne, a Coast Guard Foundation trustee, has served as President and now Chairman and Chief Executive Officer of Kirby Corporation since 1995, and as a Director since 1988. Mr. Pyne has served as a board member of the American Waterways Operators, the Towing Safety Advisory Committee, the National Waterways Foundation, West of England — an international shipping insurance company and is currently on the board of St. Luke’s Episcopal Hospital in Houston and the Webb Institute in New York.

“Mr. Pyne and Kirby Corporation have answered the call to support the Coast Guard Foundation for more than 30 years,” said Ms. Brengle. “Through their generosity in supporting our scholarship program and Leadership 44 program to build sailboats to train the Coast Guard’s future leaders, as well as address numerous morale, educational and recreation needs, Mr. Pyne and the Kirby Corporation have clearly demonstrated their support of the Coast Guard Foundation. We are honored to recognize Mr. Pyne at the Salute.”

For more than 40 years, the Coast Guard Foundation has been inspiring leadership, learning and a proud legacy of service. So far in 2013, the Foundation has raised $550,000 for college scholarships for the children of enlisted personnel, which is more than double the amount raised the previous year. The Foundation is also building a $350,000 community center in Sault Ste. Marie, Michigan – a project that will provide Coast Guard families a safe place to build a community. These are just two small examples of the ways the Foundation supports the men and women who wear the Coast Guard uniform.