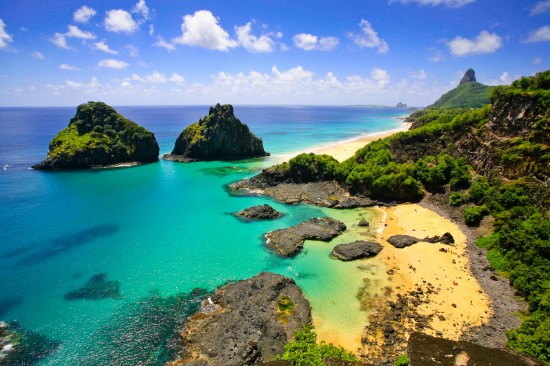 The Islands of Frenando de Noronha are a chain of 21 volcanic islands that lie in the Atlantic Ocean just off the coast of Brazil. The largest island is about 7 sq. miles and is the only populated island with approx. 3,500 inhabitants. (Can you guess the name of the main island?- It’s Fernando de Noronha!). The islands are also home to one of the largest sea bird breeding colonies in the South Atlantic and they are a UNESCO World Heritage Site.

The islands have never been linked to mainland South America. Geologically, it is the tip of a submarine volcanic formation which rises out of the deep seabed and consists of one main island and several rocks and islets. The rocks form many natural aquaria and the underwater life is diverse. Because the reefs of the South Atlantic are isolated from the Caribbean by the outflow of the Orinoco and Amazon rivers, the reef communities are very different with many endemic species.

Discovered by Amerigo Vespucci (1454-1512), Italian merchant and cartographer in 1503, the group of islands are 4 degrees 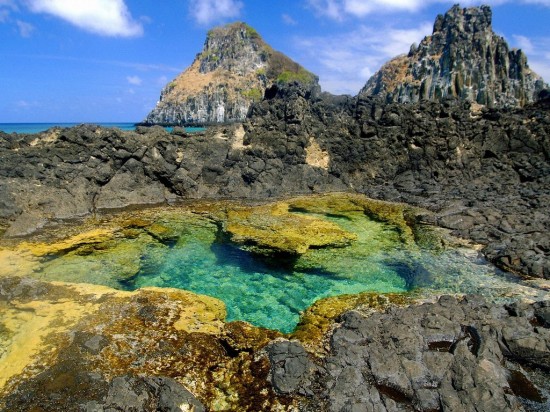 south of the Equator, around 200 miles off the northeastern coast of Brazil, north east to the city of Recife.
During its 500 years history, Fernando de Noronha has been temporarily occupied by the Dutch (17th century), French (18th century) before Portugal established dominion in 1737. They built an extensive defense system of 10 forts. The largest and best conserved fortress is Nossa Senhora dos Remédios de Fernando de Noronha. The island has also served as a prison and a US Army base.

Fernando do Noronha is relatively easy to visit. There are flights daily from Recife as well as cruises to the main island in the high season. Once on land the most popular thing to do is to relax, enjoy the beach, or take part in snorkling/diving. There is one main road and buses that take you around town. and plenty of hotels to stay at. Most of the beaches of Fernando de Noronha and the surrounding islands are promoted for tourism and recreational diving. Due to the South Equatorial Current that pushes warm water from Africa to the island, diving to depths of 30 to 40 meters does not require a wetsuit. The visibility underwater  can reportedly reach up to 50 meters. Everything from sea turtles to dolphins and sharks call this beautiful region their home.

There is a very popular tidepool, Praia da Atalaia, and once was a restricted area- but now visitors are welcome! If you wish to visit to see the tide pool, it is recommended that you arrive early because the number of visitors is restricted to 100 per day. The tide pool itself is about 18-24 inches deep but contains a remarkable diversity of animals. Lobsters, octopuses and numerous fish species inhabit the pool and, if you are lucky, maybe a baby shark.

We know you’re ready to pack your bags, but when it comes to visiting, you should know that tourism is restricted to 420 visitors at a time. So make sure to plan in advance!