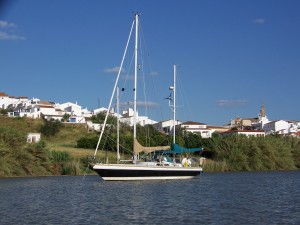 ortugal and Spain are separated by hundreds of years of fighting, big wars, small wars, lots of negotiating, smuggling, lover’s spats  and finger pointing, as well as being  separated by one  very long, narrow,  winding river called the Guadiana. My husband and I arrived in the river after sailing  across the Atlantic from Annapolis MD,  to  Lisbon,  Portugal, and down the Western coast of Portugal towards Spain. Everyone we met in Portugal and Spain  said  “Don’t miss the Guadiana!!” so we headed up the river!

Cruising the Guadiana River is an adventure that includes  colorful history, wicked currents, coffee colored  water, breathtaking scenery,  friendly folks and  fun logistics.  Entering the river is easy enough from the coastal waters of either Portugal’s Algarve coast or Spain’s 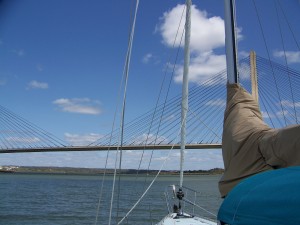 Andalusia’s coast.  But once in, sailors must go under a stunning white suspension bridge that is affectionately named  “X-Lax Bridge” due to the  fact that it is so low,  it can be quite, well, nerve racking.  You need to wait until low tide to go through. And even then, it  really  looks like the top of the mast will hit. And some sailboats simply can’t go under, the clearance height at low tide is barely 60 feet.  But if you can get under, the river is well worth the nail biting. Rumor has it that influential yachties convinced the locals  to  build a bridge high enough for an average sailboat, which is a good thing because a real treat for cruisers lies about 20 miles up river.

After winding around and in between green banks studded with a huge variety of  trees, tall grasses, cows,  and tiny villages,  you’ll come to the two small towns of Portugal’s Alcoutem, and Spain’s San Lucar. Directly across from each other, they still sport castles with cannons pointing out as a reminder of days past when Portugal and Spain fought over pretty much everything, including “ownership” of this river port. Most of the time Spain was the victor but in the 1600’s, during what is called  “The Restoration War”.  Portugal “won”.  Well, at least they weren’t taken over by Spain.  Portugal  and Spain may still bicker over many things, but here, now, the two sides get along  just fine.   At least it seemed this way. We even heard a Portuguese radio station playing in the San Lucar  grocery store, something we would not have heard down in the Spanish town of Ayamonte.  We found the swirly watery divide  between the two countries  to be friendly,  and a great spot to visit by boat.

Anchoring is tricky, with a current that runs up to 5 knots, and it is recommended to put at least two  anchors if you plan to stay more than a week or so.  We stayed a week, (we put out one anchor and it  held strong)  and I wish we had stayed longer but we had crew flying in later so we had to cut our stay short. Still, we enjoyed every minute. Our boat, “Tenacity”, a semi custom 47ft ketch,  was anchored  pretty much  in the middle of the river, making our cockpit smack in between the two countries. So we needed to speak Portuguese on one side of the boat,  and Spanish on the other. And on top of that, there is a one hour difference!  This certainly can make dinner logistics interesting.  The one hour difference was cause for questions, like,  is the weekly “Happy Hour” for cruisers in Spanish time or Portuguese time?   More important, is shopping.  Stores  close between 1:00 and 3:00PM. so if it’s 1:00 PM  Spain time, you still have an hour to get what you need in Alcoutem.  Or if it is  3:00PM  Portuguese time, the stores are still closed in San Lucar. You get the idea.  But, somehow these folks managed to figure it all out, and we got to be part of the weekly  Happy Hour and met  many  great people  from all over the world.  Several of these sailors have fallen so much in love  with the Guadiana that they stayed. Some for years!!  They call it the Guadiana Glue!  We met a few that even bought little houses and settled down and got jobs.  I could see the attraction. 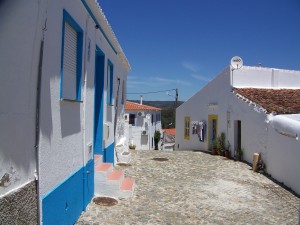 The town of Alcoutem is  nestled into the bank on the river and sits up high enough to boast surviving a bad flood.  It has a lively  town square and many steep cobblestoned streets, lined by flower pot adorned white washed townhouses, topped with  the typical orange tiled roofs There are  a several restaurants,  cafes and  shops, one bank,  a  hardware store, and one small family run and crowded grocery store, and  just enough tourism to support the castle  which is also a museum.  We had opened a bank account in a Lisbon  earlier during this cruise  as a way to get cash, and avoid the astronomical international ATM fees.  The bank that was  here in Alcoutem was our branch,  and we needed to add more money to our account.  So, we went in, and wrote a personal check to ourselves, from our American bank.  To our surprise, and delight,  they  treated us  like gold, the bank officials pulling out chairs, offering us coffee,  making sure we were happy,  just for a deposit?  Very friendly town!

There is also a Hostel/hotel a short walk from the dinghy landing that allowed us to do laundry in coin operated machines. “Do it Yourself Laundry” is very rare in Portugal so this Hostel was an excellent  find.

Specialty food trucks come on different days of the week and the locals seem to time their activities around these schedules. A bakery truck shows up on Friday mornings, and  a  thick crowd of hungry pastry lovers  surround the truck for hours to get delicious Pasta Natas for their morning treat.   The meat truck comes  on Saturdays,  ( avoid the beef), seafood on Tuesday, etc.  There seems to be a steady flow  of activity  of shopping, touring, eating and living life in this  small charming village.

San Lucar, in contrast, is peaceful and quiet.  It has just a couple of cafes, two very small, but well stocked  grocery stores, (they sell everything from fresh produce, frozen meat,  and  cheap wine, to silly hats and paint thinner). There is one bank,   and that’s about it. But some say the parties are better on the Spanish side.   We did not stay long enough to find out.  We did see that the town and its streets are beautiful, and there is a long wooded wonderful  footpath that runs along the river on either end of town.  On this path, one might run into  Paco, 83 years old and still riding his donkey to and from his farm (finca)  every day , and loves to talk. And talk, and talk, all in “Rapid Spanish”, which sounds like “Batalattaladalatalda……”  He talked so fast my ears were swimming.

On the other end of town, along the same footpath, at the end of the day, you may see a large shephard mix dog, who is not in the mood for affection because she is a working dog. The day we met her, she had come to a stop in the middle of the road, and looked right past us. We  then heard the sound of bells, followed by the sounds of sheep and I turned and saw hundreds of them  coming down the hill!  Rush hour in San Lucar!  The dog was their crossing guard, allowing  thousands of pounds of fat  fluffy wooly creatures, aimed in our direction, bells clanking, hooves thumping,  lots of “Baaaahhhs”,  to  cascade down the steep streets and into their owner’s yard!

There is a weird little  fresh water beach on the Alcoutem side. It is surreal, being hidden from the main river on a creek under huge trees and hanging moss. It’s best to get to the beach by walking  from town, and once you cross over a little foot bridge, you’ll see a clean sandy beach, along a crystal clear winding creek, complete with thatched umbrellas and a party music thumping beach café .   The creek is only barley 30 feet across at most.  Cute is the best word to describe this beach, but it’s famous, and has won accolades of European awards for it’s dedication  to being so clean!

Our stay in the Guadiana eventually came to an end. Too fast actually,  we could have easily stayed much longer.  We loved the little grocery stores,  the beach, the sheep, Paco, the  cruisers’ Happy Hour and the history. We met many and bonded tightly with a few fellow sailors,  who we hope to see again some day.  But it might take another visit to the Guadiana to see our new friends, and if we do return it shouldn’t surprise us to find them settled in the Guadiana Glue!!!  Maybe in a house, with a donkey! Or some sheep! Speaking Rapid Spanish!  And I do  hope we somehow will  go back!  The Guadiana River was truly a gem in our European cruising adventure.

You Never Had It So Good