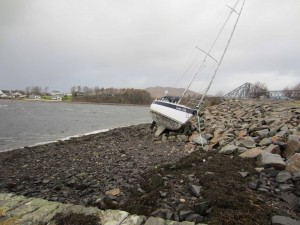 Sailing just for fun (or even coaching it) all year round is possible further south in Briton, provided you are a good careful seaman. Farther north that isn’t quite so simple the winds regularly go over force 10 with much higher wind chill factors.

Mind you if the Scottish Nationalist party win the 2014 referendum, maybe we’ll be back to keeping our porridge in the kitchen drawer (without the wherewithal to cool or heat houses!) Then running a small pleasure yacht might become a rather distant memory!

Our 2011 season started here for us with a vicious storm in June that caused mayhem. Each fall in Scotland there is often a wild season and a few boats are blown ashore. 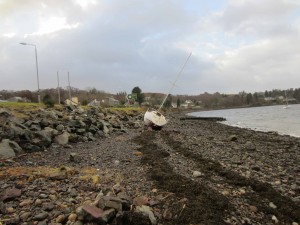 Two extreme storms last winter (neither at spring tides thank goodness!) made me question how many sailors stay afloat all winter. Whether tied up alongside or moored to a buoy.

We are constantly bombarded by the weather gods with information that winds strengths are likely to worsen as our earth’s temperature rises. Maybe all boat owners in very exposed places need to consider lifting out for a few months.

If you do decide to keep your boat in all year round then several factors need be taken into consideration:

Adrian a good friend of mine quietly keeps his beautiful but rather geriatric classic wooden yacht on swinging mooring in NW Scotland quite close to Cape Wraith. He doesn’t want to lift out each year because water cushions her old wooden hull and keeps her pickled, preventing rot.

Winds in his part of the world regularly peak at record breaking strengths compared to the southern Britain, even anemometer destroying. He mentioned to me that this certainly keeps him awake at nights when the wind is shrieking. But pins he hopes on bullet proof ground tackle in well sheltered bay.

As well as making sure that other boats around can’t blow down on him. Two of the dozen in his bay went adrift in the gales due to corroded shackles and chafed riser.

His consolation is that many boats get damaged whilst ashore, as well as afloat. And he’s not wrong there either the second vicious January 2012 gale sunk two boats in one of the Clyde marinas; and damaged roughly a third of the 95 boats left afloat there. I’ve seen other boats blow over or off their cradles in other places there as well.

Perhaps it worth realizing that boats can and do run into problems whether in or out of the water.

Guess we all need a slice of luck; wherever we keep our prized possession.