November 5th in the UK is the traditional celebration of Guy Fawkes, or as it is more popularly known ‘Bonfire Nightʼ. 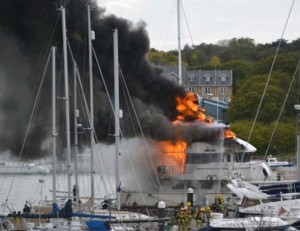 On this night family organised fires are lit in back gardens and community areas across the entire country, usually with accompanying firework displays. The is a celebration of a long ago unsuccessful attempt to blow up the Houses of Parliament, by the afore mentioned notorious villain Guy Fawkes.

But this yearʼs November 5th will long be remembered by the residents of Cowes for something far sadder and on a much grander scale. The day when ʻKahuʼa beautiful 2011 Nordhaven 76ʼExplorer Motor Yacht caught fire, became engulfed in flames and eventually sank at the East Cowes Marina on the Medina River.

Kahuʼ was built in 2011 and had recently been listed for sale with yacht brokers at $5,650,000. Upon hearing the dreadful news the brokers remarked; “Unfortunately we know very little about the cause of the fire and from our perspective, it is very sad event as she was stunningly beautiful yacht, admired by everyone who saw her.”

Firemen spent 10 hours fighting the fire that began at 1.00pm on Tuesday afternoon and only ended when ʻKahuʼfinally sank at 11.00pm that same night.

More than 30 fire fighters were involved in the long and desperate battle to save the luxury 23m motor yacht. Having once established that no-one was aboard ʻKahuʼfire crews then warned local people to keep their windows and doors firmly closed, because of the thick black smoke billowing from the blazing vessel.

The Cowes Harbour Commission has now taken on the responsibility of managing the aftermath of the incident.

When ʻKahuʼfinally went down, she was carrying nine tons of diesel on board, it is felt that this is still contained in her tanks. Although there is some evidence of oil and other chemical seepage at the scene, according to the Isle of Wight Fire and Rescue Service.

Salvage operations have now begun and will continue until the boat is raised. The cause of fire is still under investigation.

A very sad day all round, when something like this happens.

The Glorious RETURN of Latitudes & Attitudes Magazine in 2019

Latitudes & Attitudes Headquarters and Home To Bob and Jody Destroyed...