More Than You Really Wanted To Know About Cruising Compost … Er, I mean Outpost!

#8 – The New Role of Print Magazines in the 21st Century.

It’s hard for me to believe, but it’s been over 50 years since I started my first little “rag”, Biker News, back in 1973.  Over time, the change in what print publication’s roll in life is has changed more than most people imagine (or, for that matter, more than anyone really cares!) 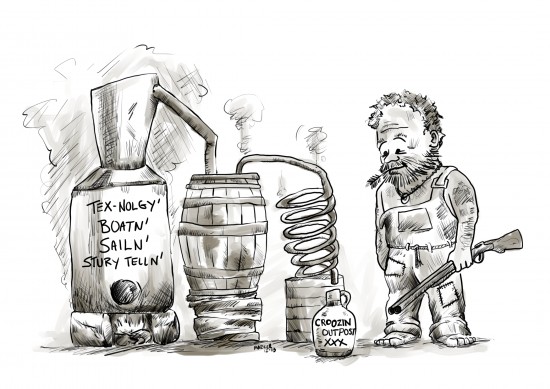 As I was sitting crushed in my seat on a “new” 737 heading to the St. Petersburg Boat show, I picked up a copy of USA Today someone had left in the seat pocket in front of me. The feature article was all about how Time Magazine, one of the most venerable print magazines still surviving this technical hurricane we call the internet, has found it’s new “place” and how they manage to still claim over 3 million circulation. This while print magazines are falling by the wayside faster than Wiley Coyote tethered to an anvil.

But as it turns out, there is still a very big roll out there for print magazines. (Thank God!) It’s true that when someone wants to research something it is faster and easier to go to the Internet rather than going to a magazine rack and buying magazines.  Not only is it faster and easier, but also it is one hell of a lot cheaper.  In all but a very few cases it’s free!

So how has Time managed to maintain it’s leading roll, and, more importantly to me, why would any fool start a print magazine in this market?

As it turns out, there are very good reasons.

First, let’s talk about the lesson learned from Time Magazine.  Their website gets millions of unique readers every month.  Many more than buy the print issue, BUT, as it turns out, their print issues are as popular as ever, even though they have diminished in page count.  The reason being, people go to the site regularly to get updates, but in order to get the full story, in depth, it is only in the print magazine. So they have found a way to reach audiences in both genres. For quick news updates, the Internet, where it is free, or for in-depth editorial analysis, they buy the magazine.  The print magazine is also available as a digital edition, but it must be subscribed to.  This helps defray the diminishing advertising revenues now being spent on print media.

Okay, so that tells us why a general interest newsmagazine is still a viable entity.  So what’s the deal with marine related print media? It is more than obvious the huge change over the past 5 years.  In the sailing industry just about every title has either been reduced to a mere shadow of it’s former existence, or, in many cases, has closed, been sold or merged with other titles to try and stay alive.

The most obvious change is advertising.  In 2007 when the world came to a stuttering realization that the bubble could not last forever, one of the hardest hit industries was the marine industry.  You don’t have a job, you can’t have a boat.  That pretty much sum’s it up.  No boat sales means no parts sales.  No parts and no boats mean no advertising dollars.  No advertising dollars means you can’t print huge monthly magazines any more.

People scrambled to retain their positions, but the day of the two-page spread in every monthly issue was no more.  As ad dollars dried up, page counts dried up.  Soon 68-84 page issues were the norm instead of the oddity.

The main reason for this was the huge shift in where people were going for their information.  It was faster, easier and cost nothing to get facts from the Internet.  But more than that, the business model for publishing had changed.  No more were the days where you could give-away the subscriptions to build numbers, so you could get more revenue from advertisers.

Simple!  The advertiser in the marine industry could no longer afford to advertise like they used to.  The dollars were just not there.  But the large circulation boating titles still had to print hundreds of thousands of copies, to fulfill subscriptions that they had almost given away during the “fat” years.  So advertisers who used to pay $18-24,000 for a back-cover or two-page spread, now could barley afford to spend 10% of that.

But this is all financial.  And that still does not address the facts I was looking for.  What made me think that there was still a viable purpose for a boating lifestyle magazine?  No one is faster to admit that I am not a good publisher.  In fact I never considered myself a publisher.  I am an enthusiast.  In my 50 years the ones I created were about the things I loved; Biker News, Biker Lifestyle, Biker Magazine, Tattoo Magazine, Latitudes & Attitudes Magazine and Living Aboard Magazine.

I could no more do a ladies tennis magazine than eat a Volkswagen (which some believe I could do!)

So when I sat down to create a boating lifestyle magazine, in the middle of the biggest recession we have had the pleasure to live thru in decades, I had to totally re-think WHY anyone would want to read a magazine, in the age of free internet, free information, and dwindling advertising dollars in the marine market-place.

As it turns out, there was a very good reason for Cruising Outposts creation. And the funny thing is, it’s still pretty close to what we have always done.  Only difference was we had to change the business model, not the style of the magazine.

It’s true anyone can find anything on the Internet. But there is so much crap to wade thru to find it; most people just don’t have the time.  And besides, if there is a new product out there, it is pretty difficult to locate it if you don’t know it exists.

But more than that, is what I call the sit-up, sit-back difference.  You have to sit up to do research on a computer.  But you can sit-back when you want to read about what you do for pleasure.

In other words, you get entertainment. You get to sit back and, for a little while, escape the digital world that has most people captive all day.  You can shut off your IPhone, your computer and the other things you have to work with today, and enter into a better time.  A better place.  A world where the wind still blows you around, and where sand bars appear from nowhere, where whales jump and dolphin play, and where, if even for just a little while, you can live the life you dream about.

And what about the financial end of things for those of us who get to create this escapists world?  Well, as it turns out, by cutting down on expenses, by going quarterly instead of monthly and by offering reasonable ad rates to the industry, we have found a way! We have our free website, that get’s millions of hits a month, and we can print a magazine that people will actually pay for.  Once they are given enough pages, with less ads, and more good entertainment, it becomes once again, a necessity of life!

Launch of The Charles W. Morgan