To a cruiser, anchoring tackle is perhaps one of the most important pieces of gear – second only to the boat itself. As such, any mention of the pros or cons of any particular component or configuration will inevitably lead to some pretty strong opinions. We should know, having written Happy Hooking – the Art of Anchoring, though highly acclaimed and as impartial as we felt able to make it, our book, and subsequent articles have stirred up the occasional hornet’s nest of ‘discussion’.

So it was with our chapter on swivels. To date we have shunned them, viewing swivels as an unnecessary weak link in the components connecting the sea bed to our boat. Yes, we have swung at anchor for weeks at a time while cruising. Where the wind was heavy, our anchor veered as a good anchor should. In light wind situations we did note that our chain was occasionally twisted, but this always corrected itself when we weighed anchor. The twist cannot get past the toothed wildcat on our windlass, so there is no chance that the twisted chain would find its way into our chain locker. The anchor simply spins while coming up and any twist is straightened out.

A second reason many people opt for a swivel is that they fear that the protruding shackle pin might get stuck on the bow roller when deploying or weighing anchor. Unless the bow roller assembly has been very poorly designed, this should not be an issue. We have literally anchored thousands of times, sometimes two or three times in one day and have never seen this happen.

Another reason put to us recently from one fellow cruiser was that their anchor always came onto the bow roller upside down.  Open the shackle turn the chain 180 degrees and reconnect was our suggestion. Guess what, it worked.

There is one place we do have a swivel – on our mooring. There is a fairly stiff tidal current where our boat is moored. Our boat thus swings a lot. As our mooring cannot veer, it is conceivable that our riser, which is part chain and part arm thick nylon, would become twisted over the course of the year. We have therefore incorporated a heavy galvanised swivel in the riser, which we do replace every year. So, one cannot say that we are anti-swivel.

We were cruising in company with some friends one weekend a while back. When our two boats reached the destination, we dropped our hook and got to work preparing the cocktails we had promised our friends. We heard a shout and found our friends had brought their boat alongside ours. They wanted to raft up. This was odd, as we had discussed anchoring separately, so that our respective boats would be secure for the night. It turned out that they had lost their shiny stainless steel anchor (of which we had been quite envious) from their bow when a stainless steel swivel failed while underway.

Two things became evident as we looked at their problem. There was some corrosion (rust) on their ‘stainless steel’ swivel – yes, stainless steel will rust. And there was significant evidence of rust on the swivel shaft, which was hidden from view, as is the case with many of the ‘nicer’ swivels on the market today.

The problem with all of these swivels is that their shaft is hidden from view. Should the shaft rust, which would seem to be likely as the space around it will remain moist, then it will no longer be as strong as it once was.

Some of these swivels have a threaded shaft with a nut welded onto it to hold the two bits together. First of all, a threaded bar (as with the one above that snapped) is inherently weaker than a solid bar of the same diameter. Then there is the issue of the welds not holding, as happened in the swivel shown here.

The other problem we found was that our friends were in the habit of bringing their anchor in tight to the bow roller using their windlass – their chain was thus bar taut. They did this so that their anchor would not bounce around while underway. Given the fact that there will inevitably be movement as the boat pounds through waves, this will undoubtedly put undue strain on the swivel, any shackle, and on the windlass.

Our friends quickly purchased a new anchor and swivel and were once again the envy of the fleet. A few short weeks later, both were gone. Having reflected on what had happened, they now have a galvanised anchor and no swivel. They also tie their anchor off to a cleat leaving their chain loose on the foredeck. We just heard that they have been successfully using this same setup for several years now.

Another reported failure of this type of swivel occurs when the boat veers strongly to one side and then comes up short. In this instance something has to give. These lateral loads can be so great as to bend the anchor shaft. They can also cause the swivel to be bent open with the screw thread being stripped out as is shown in the photo above. Alternatively the swivel shaft may shear or, as in the example to the right, the internal retaining pin may break. Of course this lateral load is also applied as the anchor is hauled over the bow roller – often with some gusto, so that the anchor bounces with the swivel on the roller as it rotates into the correct orientation. 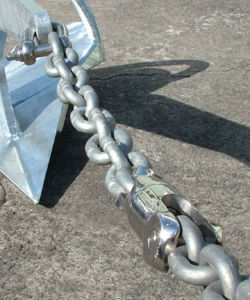 A solution to this is to position the swivel some way up the chain as is suggested by Craig Smith (http://www.petersmith.net.nz/). A short piece of chain is thus shackled to the anchor with the swivel connecting it to the rest of the chain rode. But this leaves you with the shackle that some wish to eliminate.

The other option is to design the swivel so that it can indeed move laterally as well as twist. One such example is shown here, where the manufacturer has designed in what amounts to an extra chain link. It would appear that the lateral forces would still be exerted on the jaws attaching to the anchor and on the swivel shaft – not to mention that the shaft remains hidden from view and subject to rusting.

Following the adage that simple is better, one might also consider a simple shackled on swivel. The one we saw here could move laterally if sized correctly. Its only downside is, of course, that the shaft is still obstructed from view.

For anyone thinking they need a swivel, and that they need to attach it to the anchor, there is one option we had the pleasure of taking out cruising for the past several months. It is the Ultra flip swivel manufactured in Turkey by Boyut Marine. It incorporates a flipping nub to assist anchor alignment, a durable Teflon-coated ball for easy rotation, and a back bridge that supports the anchor as it travels over the roller. The back bridge also looks like it would add extra strength to the already beefy swivel. This swivel also has virtually no hidden places that cannot be inspected and for moisture to collect causing corrosion. The other part we liked was that this swivel not only twists, but will articulate to all sides reducing the danger of the lateral load. Like the beautifully styled Ultra anchor, Boyut has again produced a lovely looking piece of equipment as well.

A note on stainless steel shackles and swivels.

Stainless steel looks great. We were indeed very envious of our friend’s lovely shiny tackle particularly when next to our own dull galvanized anchor and chain. Even our shackles are dull, boring looking galvanized iron. On the other hand stainless steel, even the top grade 316, is more brittle, and thus not as strong as so called mild steel. Another chief characteristic of stainless steel is that it is smooth (and shiny). Galvanized shackles are rough and will bind when tightened properly. They can be difficult to open and are thus quite unlikely to ever open when they shouldn’t. Stainless steel shackles, on the other hand, do not bind and may come undone when least expected. This happened to me at the top of the mast when the shackle connecting my climbing gear to the halyard opened (but that is another story). Stainless steel shackles in particular must thus always be seized with wire.

As mentioned previously, stainless steel does corrode. This may occur internally, weakening the overall piece of hardware. Rust will also occur in hidden crevasses which will stay wet, as in the above mentioned swivels.

So, where does this all leave us?

With the Ultra swivel we have indeed been shown a swivel that appears to have very elegantly solved all the arguments we would put forward in opposition of using a swivel on an anchor rode. It obviates the need for a shackle, it has no hidden parts, it looks to be very strongly (and beautifully) constructed, and it moves laterally as well as twisting.

Does this mean that it is advisable to add a swivel to an anchor rode? The way we see it, not really. As mentioned, we have on occasion spent months at anchor with wind and tide shifts. Our rode certainly had twists in it, but they all came out as we weighed anchor. With a permanent mooring, that is certainly a different matter, and a local mooring contractor would be the best to advise on this.

In the final analysis, it remains up to the individual boater. There is good quality equipment available. So, if you feel you must go this way, then go you may!

Captains Alex and Daria Blackwell are the authors of “Happy Hooking – The Art of Anchoring.” It covers every aspect of anchors and anchoring in a fun and easy to read format with lots of photos and illustrations. It is available from good chandleries, Amazon & CoastalBoating.net