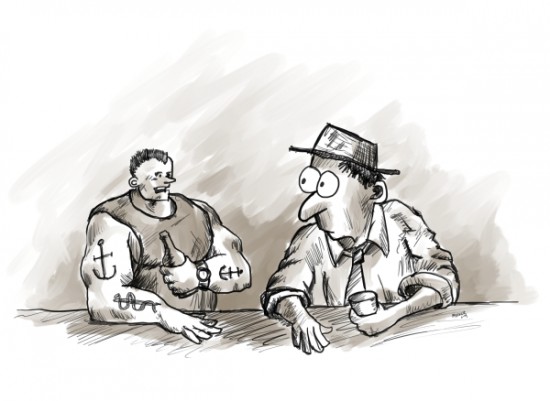 WARNING: This joke may not be safe for work! 🙂

A traveling salesman broke down on the side of the road near  a bad part of town one evening after a long day of door-to-door sales. After calling a tow company from his cell phone, he decided to wait in for the tow truck in a nearby bar.

He sat down in the corner of the bar to quietly nurse his beer. He kept trying to mind his own business, but he was shocked to look across the bar to find a very large, muscular sailor doing shots. While the sailor’s chest and arms were huge, the salesman was shocked to notice that his head was about as big as a grapefruit. Needless to say, he couldn’t help but stare.

Soon the sailor stood up from his stool and swaggered over to the salesman, who was shaking in his loafers. When he reached him, the sailor said, “I see you staring at my head over here.”

“That’s okay,” the sailor said and sits down next to him. “I want to tell you my story. I was out at sea last year and there was a terrible storm. My ship was sunk, and everyone drowned but me. I struggled to stay afloat and managed to swim to the shore of a deserted island. I stayed there all alone for six months, eating coconuts and crabs.

One morning I was woken up by screams coming from the lagoon. Running down there, I discovered a woman struggling in the thick seaweed. I ran down to the water, ripped the seaweed from her naked body, and pulled her up to the beach. She was a mermaid! I stood gawking at her for a while, and then she thanked me, offering to grant me three wishes.

My first wish was to be back home before the end of the day. She said, ‘Okay.’ My second wish was to have a billion dollars so I would never have to go to sea again. She said, ‘Okay.’ Then I scratched my head and tried to think of something else. I said, ‘Well, since I don’t really need anything else, how about we have some sex?’ She smiled and wagged her fish tail at me. ‘Silly,’ she said, ‘look at me. I can’t have sex with you.’ I laughed and said, ‘Oh okay, then how about a little head?'”