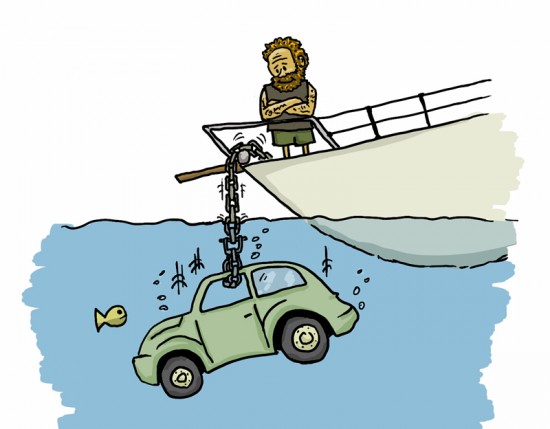 So the other day I’m sitting and downing a cold one with my father-in-law, who built his own boat some 20 years ago and has been cruising the Caribbean ever since.  The conversation came around to anchors, and all of a sudden he turned into a preacher.  As far as he was concerned there was only one anchor.  A Delta.  Period.  End of conversation.

Another at the table smiled knowingly, and espoused the virtues of his favorite anchor, the Fortress.  As far as he was concerned, it was the only anchor that actually worked.  Period.

An old salt sitting at the next table cut in to say that he has been using a Fisherman for over 40 years, and there was none that could compare.  Period.

What skipper on earth has never uttered the phrase “I use a (blank), and it’s the best anchor there is!”?  Come on.  Fess up.  Everyone has loyalty to the hunk of iron hanging off the front of their boat.  Of course they do.  If they didn’t think it best they wouldn’t have it hanging there.

It’s actually a lot of fun, when sitting around the old palapa table, wriggling your toes in the sand on a warm day ashore, tipping a few of the local brew while discussing voyages, to throw in a little sniglet of a challenge.  You know, something like this:

“You know, the best anchor ever made is the (insert your anchor here)!

A second will then tick by, and it will start.  At first it will be cordial.

“Yeah, that’s a good one, but the Hunk-O-Iron 3206 has held me in every blow I’ve ever been in.  Why I remember back in the summer of ‘86 when…” and the stories about anchors holding will then commence.

After each skipper at the table has sworn to the validity of having their particular hunk of rusted iron, then it’s time to get to the real truth.  It’s here you introduce, what I like to call the “rub.”  All good conversations need a little friction, right?

“You know, my Hunk-O-Iron 3206 is great, but…” and then you go into one particular time when your hunk of iron let you down.  Now the stories going around the table will change.

Sit back now, and listen as each person trashes their “unsinkable” anchor.

I have found that, with three or four skippers at a sitting, one can, with the correct injection, stretch a cold one into a complete afternoon and evening meal of entertainment and fun, just by using this technique.

And what’s even more fun is when you spark up the stories with “and then I read this story in Boat Anchoring Annual, and they said….”

Because, as we all know, anyone who gets their by-line in a boating magazine is an instant authority.  Just ask me, I know.  I usta couln’t even spell editer, and now I is one!

I have dropped hooks in probably every kind of bottom and weather you can imagine.  During our last little 50,000 mile, five year jaunt, we figured we were actually tied to a dock or in a slip less than 90 days in those five years.  Say we were under sail crossing oceans seven times, at about two-three weeks each, so there’s another 150 days.  That leaves about 1,500 days at anchor.

And I don’t know a damn thing about anchoring.  Nada!  Zilch!

People ask me at seminars about it, and I gotta fess up.  I’m about as ignorant about anchoring as the first day I puked over the side of my first boat.

What do I carry on my boat?  All the iron I can find, beg, borrow or steal, that’s what.  At the present time I have a 110 pound Bruce hanging off the port bow, a 65 pound stainless plow on the starboard, a very old 65 pound CQR as a backup below decks, to use as a second anchor in-line if needed in a strong blow.

On the aft rail I have a 65 pound High-Tensile Danforth, strapped next to a 66 pound Bruce.  Below I usually keep a 95 pound Fisherman, just in case.

I can tell you unequivocally, any one of these anchors has held well in perfect weather and bottom conditions.

I can also tell you, with as much honesty, that there are times when each of these would not hold.

And that is why, dear reader, you will never again see a headline or a story in this rag that states what you read at the start of this column.

If there is any little wisdom that I can pass on without fear of contradiction by others, it is this.  Always get an anchor at least one size larger then “they” say you should, and always lay out more chain or rode than is suggested by the experts.  You won’t be sorry.

Okay.  Time to hoist that rusting hunk of iron, and do what boats are supposed to do.  Let’s go sailing.