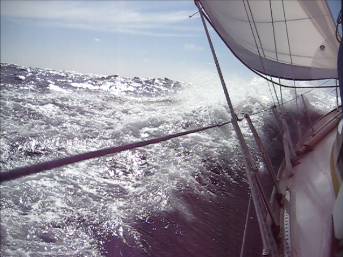 The recent tragic loss of four sailors delivering ‘Cheeki Rafiki’ back to UK after race week in Antigua. Has prompted great sadness from all yachtsmen and sailors alike; our thoughts must go out to all their families.

Modern production yachts can be made unsinkable.  I realise this may not have saved these men’s lives. Particularly after we were told that the crew hadn’t had time to deploy the yacht’s liferaft. Perhaps due to rapid inversion after keel loss?

But having an unsinkable boat would give the crew more time during all the other circumstances that arise from hull failure.

Western governments try and tackle yacht safety in a variety of ways. France leads most of Europe in concentrating on giving categories; these determine how far each particular type of yacht can go offshore. They don’t seem to worry so much about the competent of the sailors.

Here in Britain the Royal Yachting Association tries to adjudicate with both yacht safety and the skill level of the crew. Particularly if the yacht involved is used in a commercial way for training, charter etc. Both America and Canada don’t seem to legislate quite so much as Europe yet, but that could change rapidly. Australian and NZ tend to keep tight controls; particularly regarding safety equipment carried on visiting Ocean crossing yachts.

Like many things human mistakes are made, when it’s Government driven. Ideas don’t move on as we would hope; it’s a bit of a muddle.

During the 80’s Martin Sadler led the way in UK building several unsinkable production yachts. Following the lead of several other European companies, such as the Belgian Etap. Many big single-handed ocean racing events (mostly French organised!) have realised, that if they don’t control safety. Governments will step in and then ban the whole show. Especially with the high costs involved with search and rescue. Australians have faced big expenditure on SAR’s in the Southern Ocean and made it clear it couldn’t continue. All the boats involved in these types of events nowadays are unsinkable.

We know life rafts aren’t infallible; and can be impossible to use if the boat is rapidly inverted. My first four ocean crossings were done without a life raft (three in a 22ft boat). I was young, lacking money and stupid. Luck was on my side, thank goodness…in times past, we all knew as mentally committed oceanic sailors; it was highly unlikely anyone was coming to rescue us. Given the technology available then. Perhaps it gave us a slightly different mental outlook, to today’s sailors.

Out There With Cruising Outposters (46 Pictures)

Podcast – No matter where you go there you are