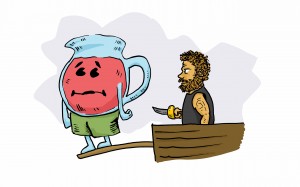 Cruising, what a concept … to put all of your worldly belongings on a sailboat, haul up some canvas, and sail off into the sunset. Everybody dreams of doing it, but only a very few are ever really crazy enough to cast off the lines. This publication is dedicated to those of us who are just crazy enough to live this lifestyle, those of us who cram our lives into an area just a tad larger than the average jail cell, point a vessel toward the open sea, and truly believe that, with just the wind at our backs, we will actually see landfall on the other side of the horizon … those of us who have found the reality in our dreams.

Some 20 years ago, I sailed out of San Francisco aboard a topsail square-rigged schooner called “Stone Witch.” Built and Captained by my mentor, Alan Olsen, she had no motor, sported four, 22-foot oars as her auxiliary power, and ran under kerosene running lights. We hauled the anchor by hand and raised the sails without winches. We drank tepid Kool Aid, lived off of canned corned beef, and loved every damned minute of it.

And I fell in love with cruising.

Now I don’t want you to get the wrong idea. I am not a purist. I enjoyed my initiation to cruising, but I learned from it. Times change and people do, too. Now my favorite saying is, “I cannot recommend decadence as a way of life, but it works for me.” People who substitute storage (or even bathtubs!) for engines are a few bricks short of a full load in my book. As I said, my first cruising was done the hard way, but in the intervening 20 years I have gone full tilt in the other direction. Such luxuries as a TV, VCR, SSB, radar, autopilot, and microwave are just the beginning. The man who invented the watermaker is a deity in my book, as is the man who came up with GPS. Solar panels fill my batteries so my icemaker won’t let me down—there is nothing like the sound of ice tinkling in a glass at sunset as you cross the equator. The days of tepid Kool Aid have passed—and good riddance.

For almost 20 years I have lived aboard sailing vessels and cruised well over 75,000 miles. In just the past five years I have had the pleasure of sailing some 45,000 miles to the most beautiful places in the world. During this time, I have shouted, “I hate boats,” a thousand times, sailed with idiots and geniuses, seen poverty and riches, and have been fortunate enough to join the family of cruising sailors—that stupid breed of human that spends weeks at sea in heavy weather, with water dripping into every orifice, and actually has a smile on his face as he enters a storm-swollen harbor. To those who have never done it, you just can’t explain what it’s all about, and to those who have lived it, no explanation is needed.

Latitudes & Attitudes has a special meaning for sailors. Sailing the lower lats is what we live for, and attitude is all important. Quoting another cruising mentor of mine, Dr. Larry Hazen, who sailed off some 13 years ago for a “three-year cruise” and is still out there, “Attitude is the only difference between an ordeal and an adventure.”

Latitudes & Attitudes is dedicated to this family of crazies, and to the way of life we live. The idea was born during a hundred nights at sea and nurtured in small gatherings on beaches around the world. Input from cruisers met in far flung ports has become a reality, and Latitudes & Attitudes is that reality. Welcome aboard. This is your magazine. It is not published by Daddy Warbucks Industries or Acme Conglomerate Publishers. There’s just me and a couple of cruising friends. If you like it, let me know, and if you don’t, tell me why.

Eric Stone is Gonna Own A Bar?