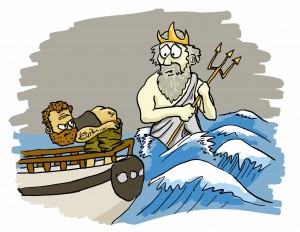 It was the eleventh day of an eight-day crossing.  We’d left Pago-Pago on a beautiful sunny day, with 15 knots of wind and almost glassy seas.  It looked to be a perfect departure.

By the afternoon the winds had shifted around.  Any guesses to which direction? You got it.  Right outta where we wanted to go.  Lovely!

As the hours progressed into days the winds velocity changed.  Once again, class, wanna guess?  Yup, you got it again.  They were inching up on 35 knots, right on our nose.

On the fourth day we noticed our GPS was starting to go off.  It had to be.  We were making seven knots headway by sailing about 33 degrees off the winds (and off our course).  But the silly electrical doodad was saying we were only doing about three knots.  Silly gadget.  Never did trust ‘em.

But the next day, on our noon-sight, it was confirmed.  We had made just 85 miles in the past 24 hours.  That meant we were deep into the Equatorial counter current.

So let’s see.  We have 35 knot headwinds, the seas are up to eight to 10 feet, the currents are on our nose, and we are barely able to make three knots, in the wrong direction.

Are we having fun yet?  Is there anything else that can go wrong?

Never ask that question, because you don’t wanna know the answer.  In our case, the answer was a ripped main. What fun.  We get to play sew-the-sail while we drift backwards at a rate of over six knots (four knots of current and two knots of drift!).

So we decide discretion is the better part of valor, and fire up the iron Genny.  She sparks to life, we slam it into forward and get on course again, beating into what can only be described as a very wet purgatory.

Okay, so lets continue our little quiz.  Any ideas on what happened next?  Aw, com’on, always the same hands are up.

But you got it right, the engine decided it wanted a little more fuel than could be pushed through our clogged fuel filters (from all the pounding we’d done) and took the rest of the day off.

On the eleventh day we spotted Christmas Island, the first of the Line Islands.  It was still one of those “you can’t get there from here” sorta deals, being that it was still up-wind and up-current, but we saw the tips of the 65 foot palm trees.  We knew that before sunset we would be anchored in the lee, in calm seas and enjoying a respite from the 11 days of hell.

As I dropped the hook in the crystal blue water, and watched it set 30 feet below in a cloud of coral dust, I realized how much I love cruising.

I can’t think of another lifestyle that allows a person to feel the exhilaration and thrill of conquering the elements.  The feeling of self-reliance that you have after battling against the winds and sea just cannot be explained to a land-slug.

I remember, barely, a crossing I once made to Hawaii, in which I had what some would call a perfect crossing.  You know, 20 knots of wind just slightly off your stern, with sunny skys and balmy days.  It was as perfect a crossing could be.  I say I barely remember it, because it has almost completely faded from my memory.

What jumps to my feeble mind is the Pago-Pago to Christmas Island fiasco, or the time we blew our tranny coming out of Palmyra, and sailed 1000 miles without a motor, through the doldrums.  I can’t remember the good sails, but can pull up with vivid clarity the one’s that tested my soul.

I am probably a little (lot?) sick in the head, but one of the things that makes a cruise memorable for me is overcoming the obstacles.  To feel that little thrill when a busted spreader is Mickey-Moused to get you in without losing your mast, or when you push your boat into a harbor with your dinghy because your engine died.

When sitting on a distant shore with other cruisers, downing a cold local brew, the talk always turns to, “and then the Vigero really hit the ol’ mixmaster when…”, and the stories that flow forth are always of the trials and tribulations, and never the less memorable, perfect cruises.

The next time you are being slammed by the sea Gods like a red-headed step-child, take a second to think about how the story is going to sound a year later, while sitting at a dockside tavern in Greece.  Think of the hours of spellbinding stories you will be able to tell your grandkids about how you overcame untold obstacles.  It makes all of the strife come into perspective.

More than one old and wise guru have stated that the hard fought victory is the one that is most thoroughly enjoyed.  By putting ourselves in harm’s way, by battling the same sea-Gods that Ulysses and Captain Cook, and a million other adventurers before us have conquered, makes it all a worthy lifestyle. Now lets go sailin’.