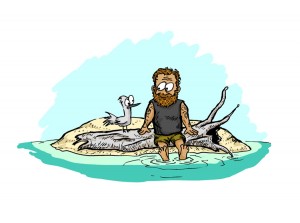 If there was just one day, one hour, that had more affect on me than any other in my life, it was this day.

I’d taken the dinghy early in the morning, and headed five miles across Suverov’s lagoon, to a small atoll on the Western reef.  The water in the lagoon was crystal clear, and I could see the reefs and teeming sealife below.  When I reached the small atoll with just one little palm tree on it, I felt like Robinson Caruso must have felt as he discovered his island.  I don’t believe anyone had set foot on it in years.  The single white tern who was living there came out to greet me, and stayed hovering over my head as I wandered around this private paradise.  When I sat down on a large, sun bleached piece of driftwood, with my feet in the water, the tern landed about three feet from me and walked right up to me, as if to say, “What’s up?”  No fear, just curiosity.  I sat there looking to the sea, and he stood beside me.  Two friends just enjoying the moment, and each other’s company.

Exhilaration, pure and simple.  That was the feeling that filled me almost to bursting.  For the rest of my life, when I want to recall what it means to cruise, I will remember that moment.

We’d arrived at Suverov Island in the Northern Cooks at dawn after a four-day battle against the winds from the small island of Mopilia, in French Polynesia.  As we anchored, the head of the only family living on the island came out to invite us to dinner on the beach that evening.

Since we’d been cruising the “civilized” islands of French Polynesia, we had expected to be met by open hands and stamp-bearing officials. Instead, this time we were met with a warm smile, and a “Welcome to our home.”

Here we learned what “civilized” really meant.  As the days turned into weeks, we soon realized a startling truth.  These people were more civilized than any we had ever met in “civilization.”

“When you visit our island you are family,” Ione, the 67-year-old head of the family would say, “and family eats together.”  Every night we would eat together. During the day, Ione would come by in his small boat and ask if any of us wanted to join him going for coconut crabs, or fishing outside the reef for tuna, or spearfishing in the lagoon.  That night we’d eat what was caught, cooked over an open pit fire on the beach.

Ione and I could sit for hours and discuss the beauties of life, and the things of importance, and have perfect understanding.  This amazed me. An ageing ex-biker and an old man who’d never seen television, feeling like kindred spirits.  Different backgrounds, but equal values.

One night, I asked him if we could repay him in some way for his hospitality.  He smiled and said that the appreciation he could see in the eyes of our crew was more than payment.  It seems that in the true Polynesian culture, the thing that makes a person get a good feeling inside, you know, “warm fuzzies,” is to do something for others.  The fact that he can help another person makes his day.

Those in the civilized world seem to get the same feeling from knowing they have bested someone, or taken advantage.  The simplicity of the life on these “uncivilized” islands makes what we’d lived with at home seem gross, crass, and almost criminal.

As we lived in that society, all that we’d left back home seemed unreal, like a bad dream, a nightmare.  Now that we have returned to civilization, all we lived with out there seems to be a dream.  But a good one.  One we yearn to return to.

And that is the difference.  When you are out there, life back home seems as if it never existed except in your nightmares, and when you return here, what was out there seems only a dream.

Cruisers of The Outpost (23 Pictures)