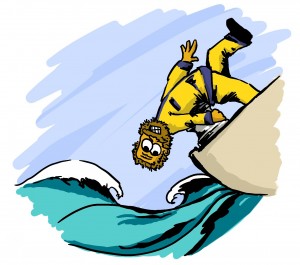 A hellacious blast of wind gripped the sails and the boat heeled over until I thought we’d be thrown out.  I found myself dangling precariously from a chrome goody that spun around, which I later learned was a winch.  I looked down into the icy-green water, wishing I had never left Terra Firma.

“Hey, would’ja mind easin’ the main-sheet a little?” I heard the Captain ask, in a very calm voice.  I just couldn’t imagine how anyone could be calm in a situation where we were obviously about to die.  Besides that, what in God’s name was a main-sheet?

I had just finished laying on a coat of high-gloss varnish on the cabin soles of The Lost Soul.  We were tied to a mooring just behind the marina’s breakwater, and the sun was painting the sky a myriad of gold and orange that seems to only exist when viewed from the deck of a sailing vessel.

I walked forward and settled into a beanbag I kept on deck for the comfort of any long-legged California deckpotato’s that might happen by.  As I really started to enjoy the sunset I heard the soft and mournful wail of a tenor sax wafting across the water.  Gary Delugg, who lived on his gaff-rigged double-ender a couple moorings over, was also celebrating the end of the day.

The sun slowly lowered behind the horizon in brilliant bursts of red and orange, just as the last notes of the sax drifted across the still harbor.

A scattering of applause could be heard from the land slugs who’d come to watch the sunset, and from the scattering of other people who were on their boats on the moorings.

I heard a load crack, and ducked as an 18-foot piece of my toerail broke loose from the boat.  The sail-track was through bolted but the rail couldn’t stand the stress of a full gale, even with just a storms’l.  The wind whipped it around as if it were just a twig.

We were only 180 miles out of Hawaii on the end of a three-week crossing from Mexico, when all of a sudden the winds reversed and we found ourselves going bow-first into a pure hell of white foam horses.  We were being blown across a wind-whipped sea of dark, almost black water.  Before it ended and the Trades returned we would be blown almost 100 miles off course.

Four days later I started to get worried.  According to my last noon sight, we should have seen 12,000 foot Maona Kea.

I anxiously walked the deck, not wanting to worry the rest of the crew, but knowing we should have seen land hours ago.

It was Bruce.  He was standing on the bow pulpit, pointing ahead.  Unbelievably, we were almost on the island.  We could actually see the surf breaking just a few hundred feet in front of us, but no island!

It seems a volcano had erupted on the other side of the island that day.  We hadn’t heard about it, but there was an atmospheric disturbance that allowed less than a one mile visibility on a perfectly clear day.

The worst thing about firsts is, they can only happen once.  One of the beauties of cruising is, there are so many firsts that we still get to experience, in an age when firsts can be appreciated.  Your first sail may be behind you, but you can always relive it in your mind, because it will always be a first.  The first time you go sailing (scene one), the first day you live aboard (scene two), or the first ocean crossing (scene three) are just a few of these.

How about your first gale?  Your first equator crossing?  The first time you throw a wrench across a room in rage at an inanimate object screamin “I hate boats!”  All these things you have to look forward to.

Planning your first cruise.  Sitting down with all the charts and guides and info you can find, and living the cruise long before it even starts.

The first time you enter a new harbor is recurring.  This will happen literally hundreds of times, and the beauty of this lifestyle is, you can re-live each of these, because each is as vivid in memory as your first true love.

After 30 or 40 years, you will still have firsts to look forward to, because it is impossible to run out of new harbors and new adventures when you cruise.  While your friends will be living vicariously through your letters, you will be living each day, each adventure.

The sun broke out from behind the black clouds, and all of a sudden the rain and squall of the darkest storm of the cruise melted into a warm and beautiful day.  Just then we spotted Nuku Hiva, our first tropical island.

New Mantus Anchor Taken Out For A Cruise