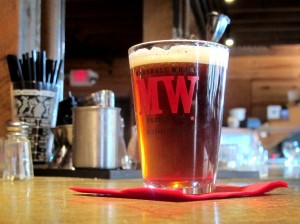 Marshall Wharf Brewing is a personal favorite when visiting Belfast, Maine. They sell their beer in “Growlers” and olde fashioned term that “likely dates back to the late 19th century when fresh beer was carried from the local pub to one’s home by means of a small galvanized pail. It is claimed the sound that the CO2 made when it escaped from the lid as the beer sloshed around sounded like a growl.” Barley Wine is one of their best and this new seaweed brew sounds like it’s worth a trip to back to Maine for a taste. For science.

More craft breweries are using exotic ingredients in their creations these days. There are ales made with all kinds of fruit, beers infused with coriander and other spices, stouts brewed with oysters — even beer made from yeast scraped off 35 million-year-old whale bones. But what about a beer made with seaweed?

At Marshall Wharf Brewing Co. on the Belfast, Maine, waterfront, new beers begin their journey into draft lines and pint glasses inside two large tanks. Marshall Wharf has a reputation for making some unconventional beers — a stout with locally sourced oysters, for example, and a wheat-infused kolsch with jalapeno and habanero peppers. A few years ago, David Carlson, the brewing company’s owner, discovered a beer from Scotland, called Kelpie, made with seaweed.