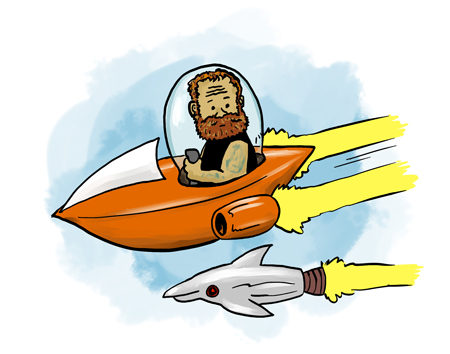 After some reflection, I guess the millennium was a pretty kewl deal.  I remember sitting in the back of my mom’s station wagon some in the 50’s, thinking for the first time how close I was going to live to seeing the year 2000.  Back then, in the 50’s, we had all kindsa ideas of what it would be like.  You know, satellites going around the earth, pocket radios, space shuttles; all those things that we know they’ll never really have, right?

So here I sit, writing my story on a laptop computer, sending it to my office over a satellite.  I had to stop for a second and answer my pocket-phone.  In a few minutes I will wander topside and make sure my auto-pilot is handling everything okay, and maybe I’ll pull in a little of my self-furling headsail.

Yeah, like I was saying.  We had all kindsa ideas about far flung things that could never happen.  Sailing hasn’t changed hardly at all since the last century.  What could change about something as basic as sailing?  I ask ya, what?

Let’s see, wooden boats with canvas sails and iron men.  That’s the sailing scene in 1900.  Of course there is this new stuff they call fiberglass.  It might work okay for building boats.  And then there is Dacron and the other world of modern fabrics they are making.  Can you imagine how beautiful a full rigged bark would have been if they had invented spinnakers back then?  Just think about it.  A few hundred thousand feet of billowing nylon in a rainbow of colors.

But wait.  There are no more barks.  Now they have found a way to make boats sail into the wind!  Can you imagine what they would have thought seeing a modern sloop sail 25° off the wind?

And what about things like radar, auto-pilots and GPS?  What used to be the mark of a sailing man, his sextant, has now almost become a museum piece.  Only the few of us that still know how to make a reduction still carry them, and then, mostly for the nostalgia of “The old days.”

Actually I have it pretty lucky.  I am writing about the improvements made in my particular chosen endeavor, sailing.  Imagine the folks who are writing about motorcycles, Jet-Skis and computers.  They gotta be wracking their brains about now.

Sailing is one of the few endeavors that has actually been around since the start of the last millennium, and a few millennium before that, as well.

You know, even thinking about all that has happened in the past 100 years, if you go back 1,000 years, there is still a connecting thread from then until now.

We sailors are a lucky lot.  As we drift along on a soft trade-wind, listening to the sound of the water as it trickles by the hull, we can imagine what our predecessors must have been thinking, 1,000 years ago.  We still have a common bond with them.  There is no doubt but that they got just as excited as we do when they saw a pod of Dolphins, or whales.  As you turn to pull in your trailing fishing line next time, think about how, over 1,000 years ago, your predecessors were doing exactly the same thing, and having just the same thought.  “Oh boy, fresh fish!”

I guess its kinda funny, but I started this silly column with all the intentions of taking it to where sailing has gone in the past hundred years, and then maybe speculating on where it might go in the next 100 or even 1,000 years.

But that’s not what sailing is all about.  Nor is it what the millennium should be all about.  It’s the past!

Our relationship with our ancestors is still strong and tight.  Every time you feel the wind start to push you toward your destination; every time you drop that hunk of iron tied to the string on your bow, you are merely a shadow of a sailor who did the same thing, probably in the very same spot, 100 years ago.  And 1,000 years ago.

And you know the thing we should really be celebrating on this very auspicious occasion?  It is the fact that 1,000 years from now, some sailor, just like you, will be dropping his hook in the same spot, and thinking the very same thing.