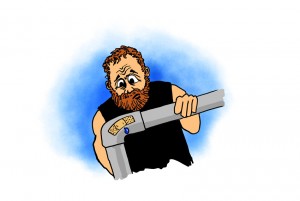 Why is it our whole life seems to change just because we have untied a couple of silly knots and cast off to go on a cruise?  I mean, did’ja ever notice how you actually enjoy fixin’ stuff that breaks when you’re anchored in a strange anchorage?  Let the same light switch go awry in your home port, and it’s a pain in the derriere to fix it!

I remember fighting to make it into Niuatoputapu in Tonga with a 3 inch hole in an exhaust elbow doing it’s best to sink the Lost Soul.  We discovered this annoying little hole when it was about a quarter of an inch, and ol’ Poop-fer-Brains (Hey, Mom! He means me!) figures the best way to see how bad it is would be to press on the metal that was still holding.  Viola!  A three inch hole from a quarter inch hole in just a matter of milliseconds! Kewl, huh!

So there we were, 10 miles from land, with a river running through our bilge, our bilge-pumps doing their best to keep the boat afloat, and I’m having the time of my life.

Excitement!  It’s the spice to life’s meat!  Nothing makes a person feel more alive than conquering adversity.  Figuring what it’s gonna take to get safely into port, and then fixing the problem that caused the hassle.  Each is an element in helping keep your inner juices flowing.

Oh, don’t get me wrong, I’m not suggesting you go around breaking stuff or causing problems just so you can fix them.  I’m not that sick.  All I am saying is, highs and lows are better then static. Of course you already know that, because that’s what drives most of us out to sea.  The adventure of setting sail for unknown ports in a wooden or tupperware boat, stretching a couple of fancy bedsheets from our mast, and actually believing that we will someday reach land, far on the other side of an ocean.  We gotta be nuts!

But, then I think back on when we pulled into the small northern Tongan island’s lagoon.  The feeling of accomplishment for overcoming the adversity was overwhelming.  It was a natural high that is unequaled.

Even after we’d turned ourselves black with oil and exhaust-based grunge, pulling the offending part out, we were still feeling it.

And then there was the real dessert to our feeding frenzy of feelings.  Finding a way to Mickey Mouse (sorry Walt!) a way to fix a hole in a three inch galvanized exhaust elbow on an island where bamboo pipes are considered high-tech. Aaeeyee. Paradise!

Even sitting here, three years later, I can remember the way everyone on board chimed in with ideas.  What in a home port would have been a miserable and grungy job, was actually an adventure for us all.

Once the hole in the elbow had been repaired we all stood back and looked at our masterpiece with a pride only a parent can feel with a gifted child.  It was stronger than new and extremely functional!  A real Rube Goldberg abortion!  You couldn’t help but laugh when you’d look at it.  A galvanized piece of pipe wrapped with a beer can, bonded in West Epoxy, duct tape and wire.  But, it worked!

For the next three months, and 2,500 miles, whenever anyone on the boat started to get a little grumpy or come down with a case of “Bad Attitude,” we’d just march the offending crewmember down to the engine room, and make ‘em look at our fixit.  If that didn’t get a smile on the lips and a chuckle in the throat they were doomed to be grumpy for life.

Even after we’d sailed into Pago-Pago and bought a new elbow, we kept our little fixit job in place, figuring we’d replace it when it started to leak.

It never did.  It became a point of pride with all that sailed on the Lost Soul.  When we’d have visitors, the first thing we’d show would be our abortionistic fixit job, and we’d laugh.  We left it in place until, almost a year later when we arrived back in our home port, and rebuilt the whole system.

We all learned from that elbow. As silly as it seems, whenever I start to lose my “starboard attitude” I can usually find it again.  All I have to do is think back to Niuatoputapu, and how a bunch of grown people stood around gloping epoxy and tape and wire around a little piece of pipe, and how good it made us feel to accomplish something as menial and trivial as that.

And the beauty of cruising is, I know that ahead of me, somewhere, is a time and place when I will, once again, get to fight the dragons of adversity, and come out on top with some silly idea.

And that, my friend, is what makes life worth living.

Maps of The World