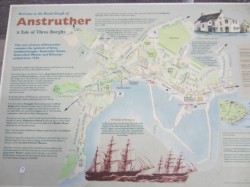 When I was a nipper living at the mouth of the Thames one postcard that really delighted me was a painting of the clippers ‘Ariel and ‘Taeping’. Driving neck to neck up Channel with everything set including Stun ‘sails. I kept it on my bedroom wall for many years. After reading the fascinating story of their 1866 China voyage, when they finished within a few minutes of one another in London. It was a race was to land the first of the annual China tea crop home in UK. After a voyage of many thousands of miles, it amazed me that these big sailing vessels could finish so close. At the time this exciting duel captured popular imagination in Victorian Britain and many other folks worldwide.

Recently a visit to Anstruther for a boat Muster suddenly bought all these old memories flooding back fifty odd years later! Whilst heading into town I passed a house with the name plate of Captain John Keay. Apparently he’d been ‘Ariel’s’ Master during this race.

The fact that both vessels were captained by Scots and built by the same Greenock yard was a triumph for Scottish maritime expertise. Unfortunately though this was the dying days of commercial sail. 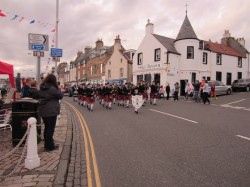 It was a bad news day for Scottish shipbuilding having heard that the last privately owned Shipyard on the lower Clyde Ferguson’s had gone bust.

This made seeing the plaque even more poignant. Anstruther suddenly began to take on more a lot more personal significance. Continuing on my walk towards the harbour past several rows of these old houses  and the Dreel Burn. The influence of the sea and fishing on this whole area of East Neuk in Fife; on the Firth of Forth was very easy to see. Crail and Pittenweem are other small shallow fishing ports situated close by; both are also delightful to visit.

Arriving at the harbour just in time to hear the local pipe band; before they headed away for their World Championship’s the following day. After the band left my sailor’s eyes were immediately drawn to the many old wooden fishing boats alongside. 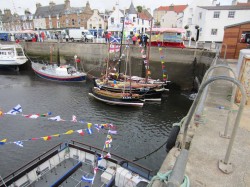 Knowing that Anstruther had been a major port for the Scottish Herring fleet prior to WW1. With the light fading it was time for a fine meal of fish and chips followed by a few scoops of the local ale, before heading back to my accommodation.

The following day it was blowing a full gale and I felt very sorry for all the local people. They were trying to assemble a large variety of stalls for their muster. Then I spent several fascinating hours visiting the Scottish Fisheries Museum. Followed by listening along with many ex-submariners to a memorial service to a Royal Navy exercise tragedy that happened close by here in 1918.

This terrible event became known as the ‘Battle of May Island’. In fact it was an awful tragedy during a Royal Naval fleet exercise! On that misty night there were 5 collisions between 8 vessels; and two RN submarines were lost. Three subs. were damaged and also a light cruiser. 104 men lost their lives.

Details of this naval mess weren’t released in UK until 1990.

Breathtaking Marinas Around The World