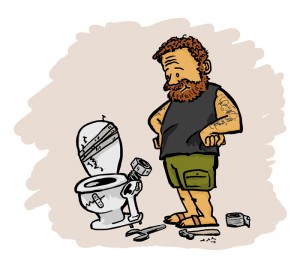 I was sitting with my legs wrapped around a toilet bowl, and I was laughing out loud. All of a sudden it seemed funny.  A bit earlier I was about to toss the darn thing over the side in silent rage.  Then it hit me.  Something my tormentor used to say when I’d bitch about having to fix one of the many things that would break on a daily basis on my boat.

We had managed to get it off and to the forward deck where we could work on it in fresh air.  Somewhere in the process of dismantling, rebuilding, and repairing it, a crucial screw decided to hide.  You know how it is.  The one screw you can’t replace?  We ended up re-tapping the part to use a screw we had (which we had to cut to fit in the first place) and finally got it to work.

Then, as I sat there contemplating the job that had taken two hours, but should have taken 30 minutes, the errant screw came rolling out from under the cushion I was sitting on.

We’ve all heard the old saying that cruising is fixing your boat in exotic and beautiful locations, and that really is the truth.  No matter how much time and money you put in your vessel, as soon as you leave your home port something is going to stop working, and for the rest of your cruise, as with your life, things will need fixing.

As your cruise extends from months into years, you will find that most of the “adventures” you will have revolve around fixing something on your boat.

You’ll be sitting on a beach in Bora-Bora, or at a taverna in Greece, talking with other cruisers.  Most of the funny stories you’ll be telling will be about how you had to find a gasket for your hydraulic steering ram in Pago-Pago, or how you learned to substitute a ball point pen spring for a fuse spring in mid-Pacific.

The adventures you will relish will be the time you had to pay $80 for a one foot piece of used exhaust hose in the South of France, or how you found replacement 12 volt fans for $5 while shopping at a gypsy’s caravan in Crete.

One thing I found while cruising is that there are a lot of folks who actually enjoy the maintenance.  If you were extremely active in your “previous life,” chances are you will want to remain so.  Maintenance on your vessel is one way to keep “puttering.”

I remember once cruising with a small flotilla of about six boats on the upwind leg out of Panama up the Pacific coast of Central America.  After crossing the Sea of Tehuanapec, we pulled into Acapulco.  The first thing most of us wanted was to hit the bar and discuss the trip up over a large, cold cerveza.

Except for Mike Harbin on Aries II (see Lats&Atts Issue #2).  He opted to stay aboard and clean his rigging and detail his engine room. The next day, when we finally got to sit down over a cold one together, he said it made him feel better knowing everything was “ship-shape.”

It just depends on what’s comfortable for you.

There are people who go to the extremes of painting all their teak brightwork so they won’t have to varnish, and others who prefer to keep the varnish up, even though it takes a lot of work.  The beauty of cruising is, both people are right.  Everyone has a different agenda, and no one’s is wrong, because once you are out there, you make your own rules.  What’s right for one person is not necessarily right for another.

And that carries right on through to the boat itself.  There are those who opt to drink tepid Kool-Aid and sail sans engine, and there are those of us who prefer the clink of ice and the curse of refrigeration.