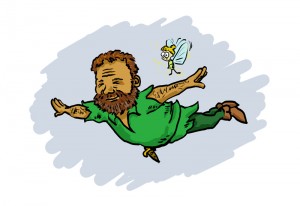 Okay, so it was a pretty near perfect crossing.  We’d left Fatu Hiva and the Marquesas behind us, and for the last four days we had been sailing in paradise.  There were 18-20 knots of wind coming from over our shoulder, the main, mizzen, staysail and headsail were out, and we were making a good 8 knots in calm seas.  It couldn’t get much better.

Just after dawn on the fifth day we spotted Manihi in the Tuamotus.  Andy won the beer for sighting land first, but I think he cheated, because he climbed the mast to do it.  That’s kinda taking unfair advantage of an ageing and size-impaired captain, whose last trip up the mast was about 20 years and 50 pounds ago.

But beer-be-damned, it didn’t matter.  I had been dreaming of visiting the Tuamotus since I started sailing.  If there is one place that sets a sailors mind in first gear, it has to be seeing pictures of those one thousand coral reef atolls just laying in the crystal blue waters of the South Pacific.

In the 4,000 miles we’d sailed to this point in our South Pacific Expedition we had learned a lot.  I learned that, even though you may have been sailing for years, it just isn’t like what you’d been preparing for.

All of the magazines I’d read told me that we would hit mountainous waves, hellacious storms and fight the proverbial dragon to cross the seas.  Being a typical dunderhead, I believed what I’d read, and was prepared for a truly monumental voyage.  Now, here we were about to enter my dream-island, and all that transpired to that point seemed abysmally easy.

As we turned to enter the lagoon I put Andy up the mast to watch our entrance (that’ll teach him to take my beer!) and we slowly passed into the deep blue lagoon of our first tropical atoll.  It was paradise.

I checked the charts for a good anchorage, and found a small motu with a white sand beach, and lot’s of coconut palms.  After we watched the anchor set in the crystal clear water it was time for a swim.  We could hardly wait to swim up onto the pure white sand beach.

Now, if this were a novel, it would be at this point where the poo-poo would hit the old mix-master.  I honestly expected it.  You know, maybe a hotel on the other side of the reef would boot us out, or a pissed-off land owner would tell us to sciddadle.  After years of dreaming about this very second, I figured it couldn’t actually be happening.

But folks, guess what?  It still exists.  Paradise is more than a mere state of mind.  It is sitting out there just waiting for you to get there.

The reality of it is, the nightmare is getting ready to go.  Cutting the lines and casting off is the beginning of a dream.  Ya just gotta do it.

Oh, you’ll hear the nay-sayers telling you that paradise is overcrowded.  That there are high fees to enter places, and groceries cost more than a heart-transplant.  And they are right.  But so what?  The old saying that the worst day cruising is better than the best day at work may be a little overstating it (the guy who wrote that musta never done 5 days against a gale!) but the reality is, whatever you are looking for out there, you can find it.  You just gotta look.

In the over 25 years that I have been cruising I have found one very basic truth.  You’ve seen it on the T-shirts, but it still holds true.  Your attitude is the difference between adventure and an ordeal.  That and a little planning.

Sure it’s crowded in Papeete, what do you expect?  Over 1000 cruisers a year pass through there.  But because of that you know you can find just about anything you need for you or your boat there, right?  So if you don’t like crowds, just make like a banana, and split!  Tahaa isn’t crowded yet, nor is Maupilia or Maupiti.

Looking for even smaller crowds, like maybe some truly desolated islands where you can be by yourself?  Well, there are places like the Phoenix Islands, and even the Marshall and Solomon Islands are rarely visited.

Okay, when you sail Greece in prime cruising season it’s crowded, but only in the more “popular” resort islands.  Do some exploring and you’ll find uncrowded islands even in paradise.  If it’s crowded don’t snivel about it – just leave.  It’s easy.  Your house floats, remember?

The dream’s still there.  Go get it!