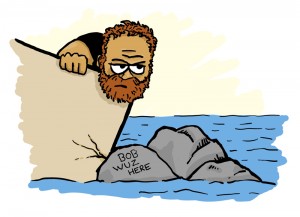 Didja ever notice how there is only one right opinion, and that is yours?  You know, only one right way to do things.  One correct anchoring method, one way to sail from one point to the next?

Probably one of the things that cruisers enjoy about sitting in an anchorage as it fills with boats at the end of the day is watching how dumb all other boaters are.  Come on, we’ve all done it.

“Hey, check out how this guys’ anchoring.  Bet he drags.”

“Look at that headsail, must be a new sailor.”

“Why would anyone anchor over there?  This is a much better spot.”

What I always equate it to is like driving down a freeway.  When someone is going slower than you it’s, “Hey, what an idiot, why doesn’t he go faster!”

Then you get passed by a speeding vehicle and it’s all about, “Yo, is that guy crazy, look how fast he’s going!”

Yup, the only people who are “right” are those who are going the same speed as you, unless of course you are having a really bad day, and then it’s all about, “What’s up with this guy, he’s pacing me.”

It’s almost humorous out in the anchorages.  If you belong to the school that says to lay out six-to-one scope, and you see a boater come in and drop a hundred feet of chain in 25 feet of water, and, whoa, this guy must be nuts.  But a week later you could be coming into the same anchorage and, knowing the area, drop the same hundred feet, knowing you are just staying for an hour or so.

Sure, there are books and books and hundreds of articles in rags like this one telling you just “how” everything should be done, but, in the end, each skipper is responsible for his own vessel, and isn’t that what makes cruising such a fulfilling way of life?  Taking responsibility for your own actions (or inactions!)?

If there was only one right way to do things there would only be one design of boat, one anchor design and one type of engine.  In reality it just isn’t so.  There are more right ways and wrong ways to do things then anyone could imagine.  The only thing that gets us to the correct answer for us is experience.

You can read a dozen books by “the authorities” about how to anchor in every and all situations, but until you have actually dropped a hook, it’s all theory.  The more times you drop a hook, the more variations you will learn.  It’s easy.  It’s also the fun part.  The learning.

Experienced cruisers are always being asked by the new sailor for tips about how to make things easier.  Being told how to lay an anchor chain in a big blow is one thing, but after you have done it, well, you just never forget.  As your cruising experiences mount up, your cruising knowledge builds.

How can you get this knowledge before you go cruising?

Ah, there is the rub.  What comes first, the chicken or the egg?  The knowledge to cruise, or the cruise?

There is nothing worse than packing up all you belongings and heading out to sea, only to learn a week later that you hate the lifestyle.

The difference?  Simple.  I don’t “know” any more then I did then, but now people think I do, so it’s Okay.  Now when I pull in and drop a hook people say “He must know what he’s doing, because he’s cruised the world!”  Whereas, in reality, I still do stuff as stupid as I did 25 years ago.  Only now people think I do it on purpose!

A couple weeks ago Jody and I escaped to a little anchorage to get away from it all, and I backed right onto a pile of rocks (which was well marked on the charts, by the way).  All of a sudden I remembered that, 25 years ago, on my first trip to that bay, I had backed onto the same pile of rocks.

All of a sudden I thought back to that far off day, and a chill came over me, because I could remember so vividly how scared I was when I’d done it that first time.  And I also remembered how horrendously stupid I felt, thinking that it was because I was so new to sailing, and that, with time at sea and a little experience, I wouldn’t do stupid stuff like that anymore.  I would learn!

And here I sat, 25 years and a dozen oceans behind me, on the same stupid pile of rocks, with the same silly feeling in my gut, and I still believe that someday I will have the experience needed to avoid such things.

Across the bay I saw a boater watching me, and chuckling.